Quake Champions is a free-to-play first-person shooter developed by id Software and published by Bethesda Softworks. The game is in closed beta as of May 12, 2017.

The popularity of MMOs have been waning in recent years, but online gaming is stronger than ever. Instead, gamers have shifted to other genres: MOBAs like DOTA2 or CCGs like Hearthstone. But one other genre that’s on the uptick is online first person shooters, popularized by the success of games like CS: GO and Overwatch.

Quake Champions is a multiplayer class-based first-person shooter developed by id Software. The game has standard FPS controls. You use the WASD keys to move while you use the mouse to aim and fire. The gameplay is based on the Quake series, more specifically Quake III. And that means Deathmatch is the primary game mode.

The game is played on a maps that aren’t symmetrical or balanced. For team centric gamers, this may sound horrible. It works well in Quake Champions like it did in the old days of Quake 3. Spawn points will feel completely random at first. There are various power-ups, weapons, and ammo scattered around the map.

Quake Champions gives deathmatch a pretty novel twist by adding classes a la Overwatch or Team Fortress. There are multiple classes in the game; the exact number is still undetermined. Each class has their own unique model, along with their own unique abilities. These classes are unique in the same vein as DOTA2 or Overwatch.

For example, one selectable class is Clutch, a big hulking robot that can deploy an energy shield as its ability. One class can turn invisible for a short period. Another class can see through walls. Each class has one and only one unique ability to it. Each class also differs in their max health and speed. In general, classes with higher health have a slower speed, while speedy classes have lower health.

In addition to Deathmatch, the game also has other modes. One of them is Team Deathmatch. There’s also a 1v1 mode called Duel Mode. In duel mode, each player picks three classes. Starting as the first class, every time you die you respawn as the next class, which means you have three lives. Kill your opponents’ three choices before dying three times, and you win the round.

Another game mode is Sacrifice. Sacrifice is a 4v4 game mode where you have to cooperate with other players as a team. This game mode is pretty much a MOBA in FPS form, and id Software is trying to position it as its competitive pro eSports mode.

As you can expect, Quake Champions is PvP focused. There is no PvE content. This game is online multiplayer only. There are no bots, but they might get added in the future. 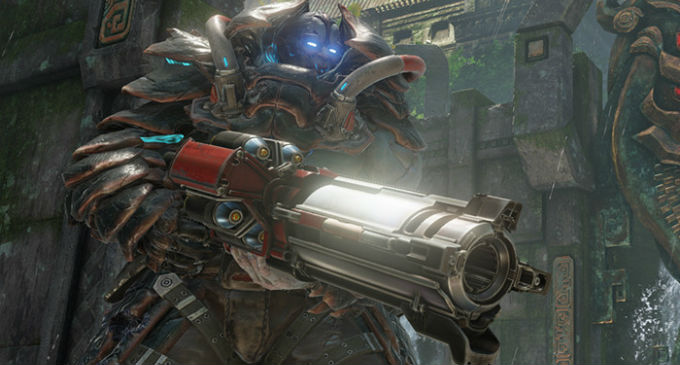 Quake Champions is fast paced and easy to get into. Deathmatch has no teams and is hassle-free. You can join into the game pretty much anytime you want, or drop anytime you want. There are no team members that will nag and annoy you. You aren’t required to stay for the whole round. You don’t need to cooperate and obey anyone. The game is pretty much just non-stop fragging. You only have yourself, and it’s pretty exhilarating.

Arguably the best thing about this game though, is that it’s made by id Software. These are the guys that practically invented the FPS genre. So you know the game is going to be good. They don’t mess around, especially when it comes to FPS, and it shows. When it comes to graphics tech, id Software is always at the forefront, and Quake Champion is no exception. This game supports next end graphics technology such as Vulkan and is capable of 120hz unlocked framerates.

Gameplay-wise, the champions/classes, adds a unique twist to the deathmatch genre. Each champion is unique, but not too unique that they restrict you into a single play style. The abilities are fun, but they are not all-powerful. You don’t need to rely on them. In fact, you don’t have to use them at all. They do not rule the game. Your guns do.

This brings us to the guns. Unlike most other FPS which have hundreds of guns, there are only six weapons in this game, but they are all unique with different attack styles. First, you have the super nail gun, which fires nails at an extremely high rate but is also inaccurate. Then you have the heavy machine gun which is average in all things. Another gun is the super shotgun which deals a large amount of damage in close range but turns useless at medium to long range.

Then we have the trusty rocket launcher, which is slow to launch but deals a large amount of splash damage. Faithful to the Quake series, you can also use it to rocket jump. There’s also the Lightning Gun, which shoots a constant lighting bolt in a straight line. Finally, we have the railgun, an extremely long range weapon that shoots molten slugs from afar. The railgun is powerful and is capable of killing you in one hit, but it suffers from extremely long reload time.

As you can see, all of these weapons have their own pros and cons. None of the weapons are better than the others. They are all balanced in its own way. It all comes down to your skills in using that weapon.

The game is monetized using the typical MOBA model. The champions are all locked behind a paywall. However, there’s a rotating free champion you can pick as a free player. As you can imagine, this results in the majority of the players having the exact same free champion in a match. It kills the diversity of the game. Paid players are also screwed because you end up standing out, making the rest of the players gang up on you.

Like most of the FPS community, the player base is also pretty toxic. Everyone will want to “fuck your mother”, and you will hear every insult under the sun. There are also a lot of people that pretend to be newbies joining newbie matches wrecking everyone while gloating about it. This game isn’t for the faint of heart.

Quake Champions is a great FPS featuring fast-paced gameplay that’s created by a competent dev team and has unique classes along with a small but diverse array of weapon types. Unfortunately, the game also suffers from a toxic community along with what might be an outdated monetization scheme.

And that’s it for this Quake Champions review. In the end, I still recommend this game. You can just block voice chat to filter out the toxic community, and the pay-to-unlock monetization scheme could be removed in the future once the game’s actually released. Nothing is truly set in stone yet.