Rift is a free to play fantasy based MMORPG developed and published by Trion Worlds. The game was first released in March 2011 and has been free since 2013.

Rift is a third person view MMORPG. Like most MMOs, controls are handled via the keyboard and mouse. The WASD keys are used to move the character while the mouse is used to move the camera and interact with objects and NPCs.

Rift has two factions: the Guardians and the Defiant. Both factions have three unique races. The Guardians are comprised of traditional fantasy races like Dwarves, High Elves, and theundead Mathosians. Meanwhile, the Defiant feels more exotic, featuring the Indian themed Bahmi, the Arabian-themed Eth, and the African tribe themed Kelari. Each race has their unique special skill and a +20 resistance to one element.

The game has five classes, the Warrior, the Rogue, the Mage, the Cleric and the DLC only Primalist. Sounds too few, but in this game classes are simply containers. Your skills and abilities are determined by the soul you equipped, and each soul has their own unique skill tree. Your class only defines what souls you can have. Thankfully, each class has at least one soul for each role type. For example, while the Primalist is primarily a DPS class with four souls focused on DPS, it still has one soul focused on tanking, and another one on healing.

You can have up to three souls equipped at any one time and respecing is free. This so-called Ascended Class System allows you to freely respec your characters depending on your situation. You can even save them as a preset, allowing you to recall them quickly at the press of a button.

As the name suggests, the game focuses on Rifts. All over the world, these rifts can open and start spawning monsters. Players near an open rift work together in closing the rift, giving rewards depending on your contribution. Normally, Rifts open on their own, but you can force them to open by using the Planar Lure. There’s also another type of rift called Crafting Rifts. These rifts do not spawn monsters nor do they open by themselves. Instead, you have to open them manually using a special crafting lure you can get from a weekly quest. 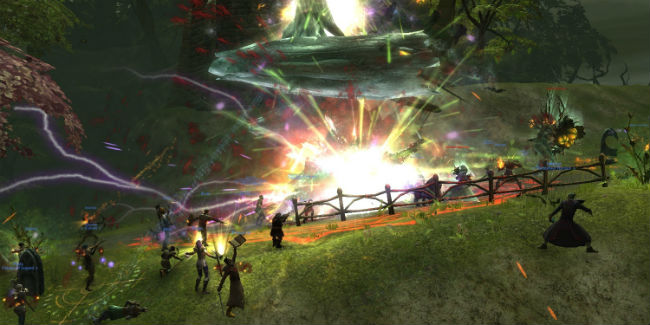 There are a lot of great things about this game. For one, the Ascended Class System is excellent. There’s a lot of variation between the souls and mixing and matching them to find the perfect build for you is great fun. Rift is one of the few fantasy MMORPGs that thematically breaks the mold of stereotypical warriors, wizards, and rogues. I actually enjoy just planning out builds online thanks to all of the options available.

The graphics are also great. There’s a lot of variation between the mobs, and the raid bosses look intimidating up close with their gigantic form lording over you. The environment also looks out of this world, full of exotic landscape and wildlife. Rift come to life as you team up with other players to close Rifts and save the world from peril. It’s all very immersive.

And finally, Rift’s game world is huge. There are three whole continents for you to explore, each with their unique fauna. There are a lot of zones to explore and they’re all breathtaking. Not only are they beautiful to behold but they are packed with content. Rift is Trion’s baby and they have kept it up to date with plenty to do. If you enjoy PvE content, Rift can keep you busy for a long time to come.

Despite all of the options with soul combinations, the combat is decidedly last gen. Players looking to leave World of Warcraft for something different probably won’t enjoy Rift. It just feels too similar.

Rift is also a grind heavy game. It’s especially true if you’re trying to level of your crafting profession. But don’t worry, as there’s a cash shop item that allows you max out your crafting level with ease.

Yes, this game is extremely micro-transactions heavy. A lot of items require real money, including the auction house! You’ll see ways to spend money everywhere from DLC to items to subscriptions. Additionally, some of the souls are only available through real money transactions in Rift. It feels worse than it is though as spending under for Rift on Amazon can get you more than enough to feel competitive. My best advice is try Rift for free then buy the Amazon pack if you’re still playing in a few weeks.

There is also a program that will allow you to get some things for free…eventually. Ultimately, paying more money can get you to right below top tier pretty quickly, but it won’t get you the very best gear. If that sounds OK then it’s really the worst thing going for Rift.

Rift is a fun game with pretty unique classes and great graphics, along with a huge world you can easily lose yourself into. Unfortunately, it does feel like developers are constantly asking for money. A little money can go a long way in Rift if you’re smart though. And it’s certainly not pay to win as it does require a certain level of gameplay to rise to the top.

I strongly recommend this game. It’s one of the best MMO in recent times and as annoying as the money grab, it’s worth the price of admission.