tl;dr – Fun and free sandbox MMO for people that like the building aspect of Minecraft and similar games.
PLAY ROBLOX NOW

ROBLOX is free to play, browser based sandbox MMO. The game was developed and puublished by Roblox Corporation. It was released in 2006. This Roblox review takes into account key differences that may place it at odds with typical MMO games.

Roblox is mostly played from a third-person view. You move the character using the keyboard keys. You can pan the camera using right-click dragging the mouse around. Your avatar can be customized; not only can you can change your hat and clothing, but you can also change your head and body shape. If you’re a paid subscriber, you can even sell your personally created clothing designs. Kayne West shirt designs anyone?

Roblox is also a bit different from most MMOs. It is a sandbox game designed seemingly for kids, where players can create their own worlds and show their creativity to others. The virtual worlds are created via block building, similar to Legos or Minecraft. Other players can then enter these virtual worlds. In a way, Roblox is more of a digital marketplace, where you browse and enter other players’ virtual worlds, and play minigames other people. As many Minecraft players will attest, this gameplay is certainly enticing for adults as well.

But Roblox is more than a block building game. The virtual worlds are literally their own worlds with unique rules and design. You see, the game allows scripting of virtual worlds using an actual programming language called Lua. This scripting capability gives a large amount of freedom with what you can do in a virtual world. As such, Roblox is pretty much a game engine.

So it’s no wonder that most virtual worlds in Roblox are minigames you can play. These games run the gamut of complexity, from simple platformers to full blown FPS games complete with classes, skills and a large variety of weapons. Since Roblox has a full blown scripting language technically, any game can be created. Indeed, some talented players have created tower defense games, 3D space shooters, RTS, and other games that are not even 3D in nature.

Roblox comes with Roblox Studio, the game’s world editor. It is this program that allows players to create and customize their own virtual world. What’s most interesting about Roblox Studio is that it is a full-blown IDE, the UI and tab placements are similar to actual professional IDEs like Visual Studio and MonoDevelop. 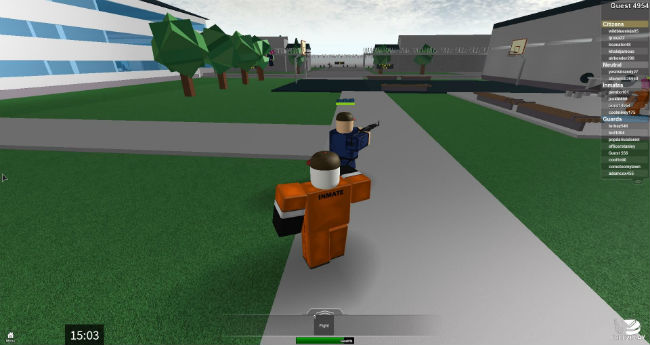 Roblox has a lot of mini-games from a wide variety of genres. It’s like Mario Party meets MMO. All players are likely find at least some games they’ll really enjoy. The games are short and tend to be good time wasters. And you can join these games easily just by a single click.

Roblox’s great feature is how it sparks creativity. While playing other people’s game, you tend to think how they made the game and if you can make one yourself. If they can, surely you can too, right? The next thing you know you’re now staring at the Roblox Studio IDE and desperately creating your own game while mostly failing (it’s not quite as easy as it seems!).

But that’s okay because you are not wasting time while messing with the editor. You learn an actual programming language while creating games in Roblox, thanks to Lua being the scripting language. Lua is used by other programs and game engines. There are games published in Steam programmed in Lua. Even if you’ve grown tired of Roblox, your knowledge of Lua can be used in other programming projects.

Frankly, the graphics of Roblox are pretty bad. Even if you compare it to other voxel type games like Minecraft, the graphics still look pretty bad. The aliasing is horrible, and there’s jagged edges everywhere. I think N64 and PS2 look better, both of which are older than Roblox. You also suffer from frequent lag. Expect frequent disconnects, especially if you joined the most popular games.

Unfortunately, Roblox’s greatest strength is also its greatest weakness. Since games are player made, they tend to be full of bugs. Most of them aren’t fixed either because the author doesn’t know how to fix it or it’s a game engine problem. Most of the minigames also do not provide adequate tutorials. As a result, you may encounter situations where the game feels broken that can be due to unexplained features, bugs, or both.

This may come as no surprise given that it uses a real scripting engine but Roblox Studio is rather complicated. It has a pretty steep learning curve. You’ll need to read the manual or watch youtube tutorials to figure out how to use the program.

Roblox is more than an innovative sandbox MMO for kids. I expected to review Roblox and find a shallow experience. Instead, the game turned out to be more complex than anticipated to fully appreciate. Not only does it allow you to make games using an actual programming language, but it also allows you to play what other people created. Unfortunately, the game suffers from dated visuals and frequent lag. The editor is also hard to learn. But if you are willing to look past those flaws you will find Roblox to be a pretty fun time waster. In the end, I recommended for patient and creative MMO gamers.