Runes of Magic is a free to play fantasy MMO developed by Runewaker Entertainment and published by Gameforge. It was released in English on March 19. 2009.

Let me start this Runes of Magic review by telling you that this game is a highly traditional fantasy MMO, in every sense of the word. Like most MMOs, it uses a conventional third person view with traditional combat. Like most MMOs, the controls are the standard keyboard, mouse, hotbar configuration. And like most MMOs, characters are comprised of very familiar classes and races. This game is made from a combination of fantasy concepts and gameplay mechanics taken from Tolkien, Diablo, World of Warcraft and others. Runes of Magic isn’t entirely original, but does that make it bad? From that question, I focused my efforts for this review.

At the moment, Runes of Magic has ten classes, and they are the Champion, Druid, Knight, Mage, Priest, Rouge, Scout, Warden, Warlock and Warrior. Note that not all classes are available to every race. Each race has one unique class, Knight for Human, Druid for Elves and Champion for Dwarves. In addition to that, each race only has access to 6 classes.

Combat in this game revolves around combos. Every attack, every skill has a particular element assigned to it. Chain the right element together and your attacks will gain additional special effects. At first, these attacks are negligible, but it gets flashier and more painful as you build up the chain. If this intimidates you, don’t worry because Runes of Magic gameplay is mostly PvE. PvP and player killing is not a central part of this game, in fact, it is only possible on PvP enabled servers. This game revolves around PvE, and Runes of Magic has built a sizable array of dungeons and raids (again, like most popular MMORPGs).

One of two differentiators for Runes of Magic is the ability to choose a second class. You gain access to the class’ general skills, along with their equipment capabilities. That means if you chose Mage/Warrior or vice versa, you could wear plate mail while casting spells. The coolest part of this multi-class mechanic is the existence of ‘Elite Skills’. Every class combination has access to a set of Elite Skills unique only to that class combination. Starting at level 15, you can learn a new Elite Skill once both of your at each multiple of five for your classes. For example, a level 32 Mage/24 Warrior could learn the Elite Skills for levels 15 and 20. Elite Skills are not learned automatically either, and the player must undergo a quest to earn them. Multi-classing is rare in MMORPGs, but I think Runes of Magic does it well.

The second differentiator vs. other MMORPGs is Runes of Magic’s Item-Set Skills mechanic. Once you have collected and completed an item set, you can visit an NPC, which will extract a unique skill from that set. Once you’ve extracted a skill from that item, you can never use to extract a skill again. Also, most item set skills have class requirements so you can’t extract skills if you are of the wrong class. 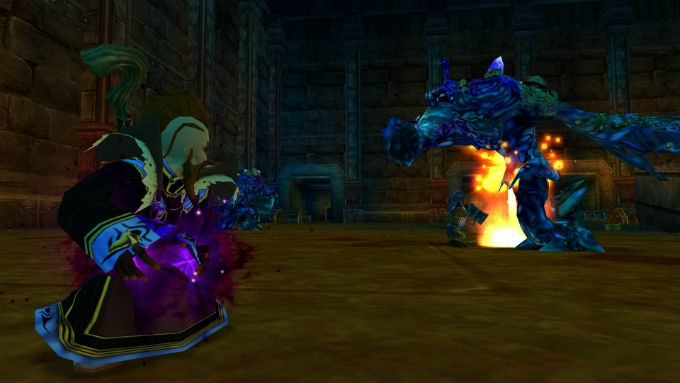 There’s a decent enough amount of character customization in this game, especially for its age and system requirements. When you create a character, you can modify features like body build, hair color, hair style, and height. There’s also a wide array of vanity costumes you can wear. Finally, you start with your home that you can decorate and customize to your liking.

This brings us to the second point: Runes of Magic has a lot of content. Your home is not merely decorative; it is functional. For example, you can place flowerpots inside your home and plant herbs in it. After a while, you can harvest the resulting herbs. These herbs can then be turned into potions if you have an alchemy table in your house. Pretty much every item in the game can be crafted or customized by you. There are plenty of quests, raids, and dungeons to keep all players busy whether they are playing Runes of Magic for free or paying to play.

The multi-class system for Runes of Magic is also pretty great. It opens up a lot of possibilities with your build over single class systems in top MMORPGs. Will you go with a full melee build like Champion/Warrior or would you prefer to diversify by doing Knight/Mage or Mage/Knight instead? By the way, Knight/Mage and Mage/Knight have entirely different skill sets. As I said before, every class combinations has unique skill sets. The multi-class system in Runes of Magic is very extensive.

Runes of Magic has a lot of content, yes, but unfortunately, it’s also incredibly buggy. One of the most egregious offenders is the memory leaks. Just the launcher alone eats up gigabytes of RAM for no reason. While playing, there’s a large chance that your game will either crash or continuously trash your swap space, making your game unplayable.

And don’t bother asking for support because there is none. The devs don’t respond to tech support. Even if they did, they will just give you copy pasted answers or tell you to google your problem. And that holds true even if your problem isn’t technical in nature like you forgot your password and would like a password reset. They won’t respond.

They are eager to get you money, though. This game is pay-to-advance. If you want to advance past level 40-50, you will need better gear. And to get those gear, you just can’t buy them from the cash shop, no, you have to craft them yourself using cash shop items. As you can expect, that requires a whole lot of money to do. You won’t notice the cash shop for a while, but the developers seem to hope you’ll be hooked by the time you do.

Runes of Magic is an entertaining game with solid mechanics. For a free to play MMORPG, it’s probably worth checking out just for the multi-classing. I actually enjoyed leveling up multiple classes to try out different combinations. However, the bugs, poor support, and late game cash shop are pretty frustrating. Although the game is solo friendly, the low level population can be pretty…low.