SAO’s Legend is a free to play browser based MMO developed and published by Gamesprite Inc. Released on June 24, 2016, SAO’s Legend is based on the popular anime series Sword Art Online.

I’d be remiss if I didn’t indicate SAO’s Legend is an unlicensed Chinese game based on the Sword Art Online series in this review. While SAO theoretically stands for Sword Art Online, this is not an official representation of the popular anime. The original Japanese makers are in no way related to this in any shape or form. With that out of the way, SAO’s Legend is a top-down isometric MMO made in Flash. Controls are simple point-and-click.

The game has four available classes: Swordsman, Ranger, Priest and Knight. There is no character customization; you can’t even pick a gender. Each class appearance is fixed. For example, the swordsman class doesn’t just look like Kirito, it pretty much is Kirito.

Skills are fixed, and you automatically learn them once you’ve reach a certain level. In combat, you can use the skills by clicking on them on the hotbar or by using the numeric hotkeys.

In SAO’s Legend you can have other NPC party members with you. The first are navigation pixies, which look like simple mascots. Contrary to the name, they don’t really help you navigate, rather, they attack enemies during battles.

Another type of party members you can have are girlfriends. These are the popular heroines from Sword Art Online and you can get them by completing the encounter quests. There are twelve girlfriends available, but you can only bring one into battle at a time.

Unlike the player character, girlfriends do not level up. Rather, you can upgrade them and their skills by using various resource items like the girlfriend gem or red roses. Recruiting a girlfriend also increases your battle power and gives you a moderate stat boost. This is permanent and skill persists even if you’ve switched to a different girlfriend. I found that in reviewing SAO’s Legend that the girlfriends do at least provide more than eye candy. Their gameplay impact is rather substantial.

The game is pretty much PvE only. There is a guild system, but you can only select from one of the three preset guilds. Player killing is also only allowed at some limited areas. The only other PvP event I can find is the ranked arena fighting. But I don’t know if you can call that PvP since the opponents are actually computer controlled.

If you are tired of farming for levels, the game features a training area where you can leave your character to automatically grind for levels. The training area is divided into different areas based on level and you can only enter training areas around your level.

Another thing you can do to gain EXP is meditate. By pressing “D”, your character will meditate and slowly gain EXP. The longer you meditate, the higher the EXP you get. There are also special areas on the map that gives a bonus for meditating. It’s a pretty low stress way to make sure your character keeps advancing. 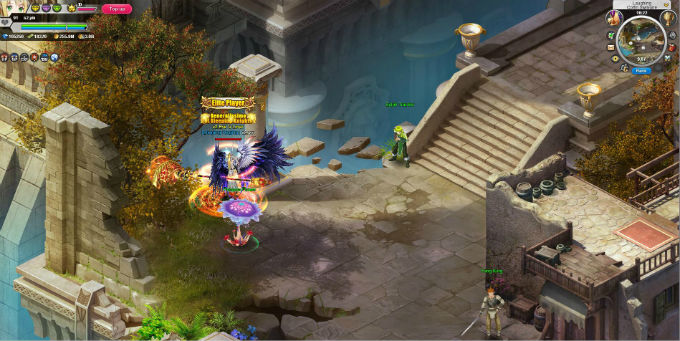 SAO’s Legend is easy to get into since you don’t need to download and install a game client. All you need is a browser with flash installed, and you’re good to go. The game’s main appeal is that you can play as a Sword Art Online character. You can play as either Kirito (Swordsman), Sinon (Ranger), Leafa (Priest) and Heathcliff (Knight). Besides that, the girlfriend system allows you to recruit heroines like Asuna and Alice as your party member in battle.

The game’s AFK/auto-questing feature is also a godsend. Thanks to it, you don’t need to manually walk your character towards the quest NPCs. The system even farms the required number of mobs automatically. It cuts out the tediousness of questing by a lot. It’s definitely an MMO that is easy to play from work.

The game has a horrible, and I mean horrible, English translation. Half of the characters aren’t even called by a real name, they’re called by random stuff like Dragon Lady or Blacksmith Girl. I thought at first that it was a misguided attempt to skirt copyright laws, but half of the characters have proper names in-game, so I think the company just doesn’t give a damn.

The story is also completely nonsensical, you only get a one sentence dialog from the NPC that doesn’t explain anything. Afterwards, your quests box magically updates to the new quests. If you are not using the auto-questing system, you’re going to have a bad time.

But that’s okay, because you don’t want to quest manually anyway. The quests are all extremely repetitive. It’s all the same: Kill N amount of mobs, talk to this NPC or harvest this random one-time resource.

Sounds familiar? Yes this game is basically a reskinned Chinese browser MMORPG. There aren’t any truly unique game mechanics here. While the theme of Sword Art Online may be enticing (even if unlicensed), players should not play SAO’s Legend seeking a new gameplay experience.

SAO’s Legend is also horribly lag-prone. While reviewing the game I encounter frequent rubber-banding, something that I haven’t experience much with other Chinese browser-based games. Their servers must be pretty awful (at least at the time of this review).

SAO’s Legend is a game that features a large amount Sword Art Online characters, making the game perfect for fans of the series. Those seeking a specific anime MMO experience might be the best fit. Unfortunately for everyone else, it’s also an unlicensed Chinese browser MMO game and is plagued with horrible translations, repetitive nonsensical quests, and horrible network connection. In the end, I only fully endorse this game to people that are interested in Sword Art Online.