Silkroad-R is a free-to-play MMORPG developed and published by Joymax. The game is a remake of Silkroad Online launched in early 2006.

Let’s start this Silkroad-R review with a short history lesson. Back in 2006, one of the top MMOs named Silkroad Online released as one of the first free to play MMORPGs. The game, set in the 7th Century AD, allows players to travel between Europe and China using the Silk Road. The game centers around a very different trinity than most MMO gamers are used to. In this PvP slanted trinity, merchants make money by traversing the Silk Road with goods, thieves (real players) try to raid them, and hunters (real players) try to protect them. Silkroad-R is an enhanced remake of that game.

Europeans have six classes: Rogue, Warrior, Warlock, Wizard, Cleric, and Bard. Your class is determined by the primary weapon you selected on the character creation screen. Your weapon type also determines the armor type you can wear. For example, Clerics can only wear robes or other light armor.

Chinese do not have classes. Unlike Europeans, Chinese can freely match and equip any Chinese weapons and armors. Chinese have five weapon types: sword, blade, spear, glaive, and bow. Each weapon type has their own skill tree.

Silkroad-R has a free-form skill system. The skill trees are divided in masteries from which you can learn a skill by using skill points. In general, you can learn any skills from your own race. For example, a European Rogue can learn Warlock skills as long as you have the necessary skill points.

As mentioned before, PvP is a crucial part of Silkroad-R, thanks to the job system. Each character can select from one of two jobs, Hunter or Thief. Merchants are not officially part of the job system and is more of a transitory role. The hunters’ job is to protect these caravans. Thieves, on the other hand, aims to loot the caravans’ goods and smuggle them themselves. As a result of this hunter-thief dynamic, PvP is a central part of Silkroad R. PvP is pretty much unavoidable in this game. 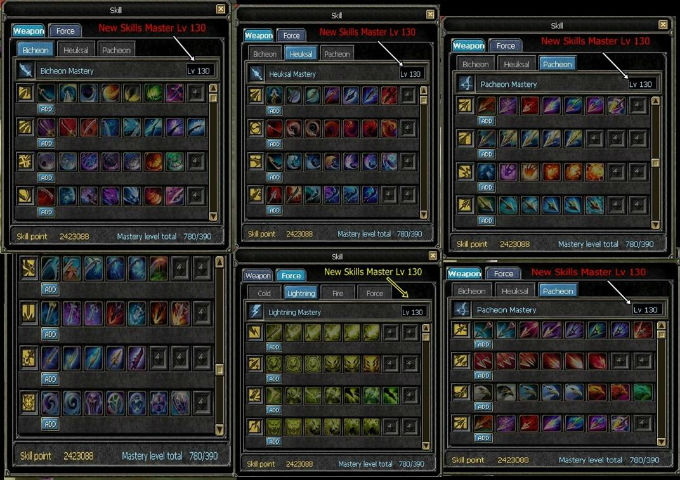 Silkroad-R has a large amount of class variety. Each class plays quite uniquely, and the free-form skill system gives you a lot of leeway with your builds. For example, a 2H Warrior could learn Wizard skills to use in battle. Nothing is stopping you from doing that in this game. Of course, sometimes that works well and sometimes not as much.

Compared to the original Silkroad Online, this game massively increased the amount of skill exp you can get from the mobs. As a result, grinding for skill exp isn’t as much of a chore compared to the original game. It still requires a lot of grinding, but it’s much more doable. At least you won’t get stuck anymore grinding for skill exp at higher levels. If that was a chief complaint that led to you leaving Silkroad Online a decade ago, it’s way more on par with modern MMORPGs now (even if the lack of quests makes it feel somewhat repetitive).

Finally, the best part of Silkroad-R is the unique PvP based on the job system. Thanks to the hunter-thief dynamic, PvP feels like a natural part of the game. The system is also well-balanced, the game automatically balances so that there’s a 50-50 split between thieves and hunters. Safer jobs can also be undertaken for merchants so that PvP stays within a balanced range. This adds a little risk/reward to the system that caters to a variety of PvP types.

Unfortunately, the game has a few critical flaws. The first of which is the severe botting problem. There are a lot of bots in this game. In fact, the majority of players you will see on the field are bots. The devs, unfortunately, do not really care. This stems from the fact that there are always tons of mobs in central locations to grind for EXP.

Silkroad-R also has a dwindling player base. The game doesn’t have a lot of players anymore. As a result, a lot of the cities feels like a ghost town. A large part of Silkroad’s appeal is the job-based PvP system. Unfortunately, that only works if you have a lot of players. Nowadays, it’s pretty typical to not encounter a thief while guarding a caravan, or if you are a thief, it’s pretty common to find an unguarded caravan. It saps a lot of enjoyment from the game.

This game also has a pretty dated graphics. The graphics were directly taken from the original Silkroad released in 2006, and they didn’t really bother renewing it. As a result, the graphics look extremely dated by now.

Silkroad-R is a remake of Silkroad featuring faster XP gain while keeping the good class variety and unique PvP system of the original game. Unfortunately, it also suffers from tons of bots and a dwindling player base. The graphics are also a bit dated by now.

In the end, is this game still worth playing? I think so. The game is still fun to play, and the setting is pretty unique. There’s a lot of medieval and ancient Chinese themed MMOs, but there’s still nothing that combines the two theme better than Silkroad-R.

The key point of this Silkroad-R review is that the historically set MMORPG is geared towards PvP players. Even with a lower player base, I still enjoyed the experience. However, if you want a strict PvE MMORPG, look elsewhere now.