SoulWorker is a free-to-play action-based MMORPG developed by Lion Games and published in the west by Gameforge. The game launched its open beta on February 26, 2018.

SoulWorker is a melee action MMORPG where you control one of the four selectable character in combat against hordes of various mobs. The game is played from a third person view and combat is handled via keyboard and mouse with standard MMORPG controls.

Unlike most RPGs which allow you to create your character from scratch, the character you play in SoulWorker is fixed. Each of the game’s four characters have their own distinct appearance and playstyle complete with unique skills. For example, one of them is a loli-styled girl with a guitar that fights by summoning ghosts in battle.

While the characters are fixed, there is still some character customization. You can change basic features such as their hair style, hair color, eye color, and skin color. You can also change their clothes and even the appearance of their weapons (like changing from an electric guitar to an acoustic guitar for the aforementioned ghost summoner).

SoulWorker is primarily an instanced-based game. There is one persistent hub city with numerous NPCs that hand out quests. Selecting one of the quests will teleport you to an instanced dungeon. Dungeons are linear and divided into sections. You must defeat all the enemies in one section to advance to the next. And once you’ve reached the very end of the stage, there is a boss fight. Killing the boss will clear the stage. The game will then rank you depending on your performance on the mission. The higher the rank, the better the loot.

Because SoulWorker is an action based MMO, combat is a bit different from your standard point-and-click MMO. There is no auto-aim, you have to aim your attacks manually. Similarly, you need to manually evade enemy attacks. Every time an enemy uses a powerful skill, a red circle will signify where you shouldn’t be standing when the attack lands.

As you might expect, SoulWorker is PvE focused. Every mission is instanced with the difficulty scaled on the number of players in that instance. As a result, most of the time it’s better to play alone. Sadly, the game doesn’t have much PvP content. SoulWorker only has one PvP game mode: Battle Arena. In Battle Arena, you fight other players to increase your rankings. The higher rank you are, the greater the rewards. 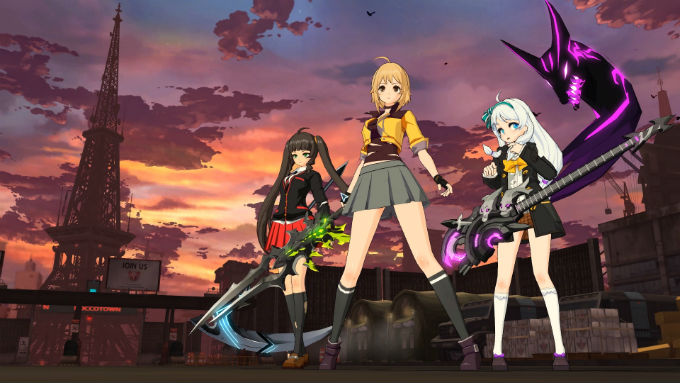 I really loved SoulWorker’s gorgeous anime art style. The characters, including the NPCs all actually manage to look attractive. The animations are also excellent. They appear natural and their faces show proper emotions. It really feels like you’re watching an anime, especially during cutscenes. Speaking of the cutscenes, the plot is actually worthwhile. I’d go so far as to say if you like watching anime and playing anime MMORPGs, not only should you play SoulWorker, you should really give it your attention too.

The enemy mobs look just as good as the characters. The bosses perform a dynamic entrance prior to the battle and they not only look intimidating, they are actually hard to kill. Unlike other action-oriented MMOs, player skill actually matters in SoulWorker. I don’t review many MMOs where I actually end up dying, but there were some tough spots in this one. You’ll need to actually be able to adjust strategies and evade attacks if you want to succeed.

Combat is also extremely fluid. The battle animations are on point. And even though the combat animations look bombastic, they don’t bog the controls down. The control is sharp and crisp. Your character responds to your controls instantly without lag or delay. And though there is some rubber-banding effect sometimes, they are pretty minimal.

The game has the annoying social game stamina/fatigue system. Stamina gets refilled at the start of the day, and every time you enter a mission you lose some stamina. If your stamina turns zero you won’t be able to enter new missions. That means you’ll have to wait until the next day or spend some real money to refill the bar. I might even like this system less than P2W cash shops (especially in a PvE game). Not that this game doesn’t have that too.

SoulWorker also only has four playable characters. And customization options aren’t super deep. Each character only has around three hairstyles or clothes each. Now there are additional ones, but they tend to be time-limited freebies or require spending real money to unlock. In fact, this is the main problem of this game: the overaggressive monetization. Compared to other versions like the JP Soulworker they intentionally gimped the EN version. They lowered the stamina bar and massively increased the price of most items. For example, a single hairstyle cost an absurd to unlock. Some of the features, like skill resets, also require real money.

And that’s it for this Soulworker review. All in all this game isn’t bad. The anime art style looks great and the fluid combat is pretty fun. Unfortunately, the western publisher is greedy in every sense of the word. The overaggressive monetization shows that Gameforge doesn’t really care about the game and just want to squeeze as much money from the players as possible.

I’d still say it’s worth playing, especially if you like action combat or anime in your MMORPGs. SoulWorker combines these in a way that hasn’t really been done before, at least not with as much style as it has.