Tartaros Rebirth is a free-to-play action combat anime MMORPG developed by Fumple and published by GamenGame. The game is a remake of Tartaros Online which was first released back in 2009.

Tartaros Rebirth is an action combat MMO. Unlike most other MMOs, you don’t create a new character from scratch in this game. Instead, you select from one of nine playable characters available. Each character has their own unique playstyle. For example, Soma is a balanced type of both magic and physical attacks. He attacks by wearing lightning on his fists and dealing stun in the process. On the other hand, we have Pinko, a girl that uses a powerful Golem during battle. Most of her skills can ignite the enemy, dealing additional damage in the process.

But while the characters you can play as are fixed, you can further customize them with skills, virtues, and phase. Skills are what they sound like – your characters bread and butter special attacks. They are activated by pressing any combination of the ZXCV keys. For example, the default Pinko’s Z attack is arm rush, a normal melee attack. Her X attack is Pinko launcher, a ranged attack while her C attack is a shield, which reduces damage received. Meanwhile, pressing Z and X at once will make her use “Rolling Hammer” which is an AoE attack. MOBA players will feel especially at home with the control scheme. These skills can be bought and upgraded from the NPCs using skill points which you get from leveling up.

Virtues are the game’s passive skills but rather than buffing the character directly, they buff the skills instead. Like skills, the virtue tree is unique for each character. Virtues are unlocked in stages based on your total virtue points, earned by simply leveling the appropriate character.

Then we have the character phase. Phase is, to put it simply, your character’s job. Each character starts in their basic phase. After reaching level 35, they can learn additional phases for their character. Each character has two second-tier phases which branch into two third-tier phases for a total of 7 phases per character (and 63 jobs/phases total in game). Now, why are they called phases? It’s because these aren’t fixed. Once you’ve learned a phase, you can freely equip them as you see fit. In fact, the game allows you two equip two phases simultaneously. Phases can by cycled during battle by pressing tab.

Tartaros Rebirth is mostly PvE, but there’s some PvP content. The majority of the content is single player instanced dungeons and missions. PvP is limited to arena combat (1v1, 2v2, 3v3, and 4v4). Players are automatically matched with one another, though I’m not sure that there’s anything to the matchmaking other than who is ready at the same time. Winning a PvP match grants PvP points which can be exchanged for various rewards. 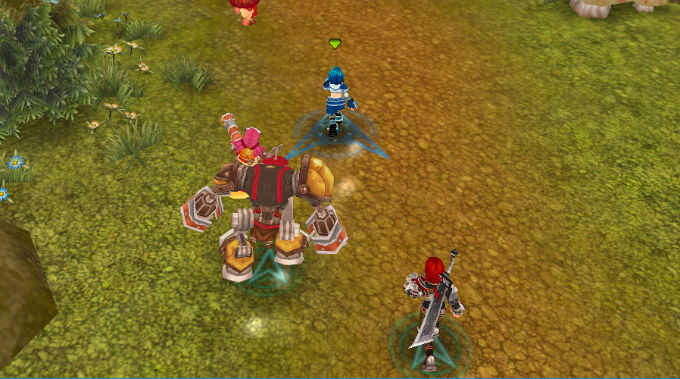 The game has a pretty fun action-based gameplay. Controls are crisp and intuitive. The character movements are smooth, and the skills are easy to trigger. Combos are easy to pull off yet still feel rewarding during battle. Amazingly, enemies are Goldilocks balanced. They are neither too easy, nor are they too hard. All of these results in a game that is easy to get into and fun to play.

Tartaros also allows you to bring more than one character with you during missions. If you do bring them, they will automatically attack the nearest enemy. And you can freely switch which one you control during battle. Thanks to that, battles never gets boring, if you’re tired of controlling one you can just switch to another. So between the game’s nine characters, you’re actually able to form up to 72 unique duo options, not including all of the phases.

And unlike most MMOs with premade characters instead of classes, Tartaros Rebirth’s characters aren’t locked behind a paywall. Instead, you unlock new characters by doing the solo story missions. The game is pretty generous when it comes to characters. It’s extremely refreshing to play a game where the publisher and developer really offers the bulk of gameplay for free. It kind of reminds me of Grinding Gear Games and Path of Exile who really does free to play MMOs right.

As a big PvP fan, Tartaros Rebirth hits the right spot with content that is actually a fun and rewarding experience. Participating in PvP earns PvP points to spend on some pretty good items. This, by itself, isn’t anything new. What sets this game apart is that the points you get depend on how long the PvP match lasts. Longer, contested fights earn more points for everyone. For example, ending the match with 4 minutes left will give the winning team 5 points while giving the losing team 0. However, ending the match with only 1 minute left gives the winning team 13 points and the losers 5 points. As you can see, there is little incentive in steamrolling your enemies. As a result, PvP is full of people just messing around and having fun.

Tartaros Rebirth is a remake of an old game, Tartaros Online which was released back on 2007. It’s old game with old assets. It looks pretty darn dated. The cutesy anime style holds up better than some of the other titles from around that time, but it can’t really compete with newer games.

The UI is also pretty confusing. There are a lot of windows and menus to navigate, most of which are only accessible by pressing the respective hotkey. Navigating the game blind is pretty challenging, and the tutorial system isn’t that great. The game relies on players talking to NPCs in order to learn how to play most of the game. I’d really recommend opening up a wiki or a guide to go along with Tartaros Rebirth.

Some may find the general advancement mechanics confusing. Tartaros Rebirth is a very unique game and most of that works in its favor. Since it’s a departure from how MMORPGs normally operate though, it flows a bit differently. For example, the way you learn skills and virtues are different. Like most MMOs, skills are upgraded by spending skill points yes, but skill points are shared across all characters. This means if you spend all your skill point on one character, others won’t have enough to upgrade anything. Now notice I said upgrade and not learn? You don’t buy individual skills in Tartaros. Instead, all skills are given when purchasing the associated phase. Nothing too crazy, but I felt it was worth noting.

Tartaros Rebirth is a pretty fun action MMORPG featuring multiple characters and a fun, casual PvP experience. The graphics are very dated and the interface needs a modern facelift. Still, it’s hard not to recommend this game. It’s really fun and the whole experience is pretty refreshing for this MMO vet. Everything about Tartaros Rebirth is lighthearted, even the PvP. There’s no hassle, and you can play at your own pace. As a result, this is the perfect game to play if you’re looking for something fun and casual.