Twin Saga, also known as Astral Realm, is a fantasy-themed Anime MMORPG developed by Taiwan-based X-Legends and published by Aeria Games in the West. It was released on September 1, 2016, in North America and Europe.

Twin Saga is a high fantasy MMO with anime style graphics. The controls are a hybrid between traditional 3rd person WASD movement and old school point-and-click. The battle system is a typical tab-targeting system with auto-attack and five hotkey slots for skills.

The game has eight classes, of which four are available at the start. The other four can be unlocked by doing quests for them. The four classes available at start are the Swordmaster, the Dragonknight, the Mage, and the Gunslinger. The four unlockable classes are the Hunter, the Paladin, the Cleric, and the Rogue. There are two upcoming additional classes: the Berserker, and the Occultist.

What separates Twin Saga from other top MMOs we’ve reviewed is the ability to switch classes at any time. Classes have their own level separate from your base character level. Every time your class level-up, you get a skill point which you can put in the skill tree to unlock new skills. This job style leveling should be familiar to former (and current) Final Fantasy XIV subscribers. Unfortunately, each class has a limited number of skill trees resulting in a small number of build options for your character.

Another unique thing about Twin Saga, is their so-called Senshi system. Senshi are NPC pets/party members that follow you around and fights with you during battle. You can have multiple Senshi, but only one can fight with you during battle. You can also evolve them using special upgrade items. And as is par for many Eastern MMOs, Senshi have an appearance of a little girl.

Twin Saga’s most unique feature is the Terracottage system. To put it in one sentence, Terracottage is mobile player housing. These act like your traditional player housing from most MMOs, but you can also use them to move around the map. Terracottage is divided into three sections: the workshop where you craft items, the main hall where you can freely place pieces of furniture, and the greenhouse where you grow various ingredients.

Twin Saga is mostly PvE. Dungeons in this game are instanced, and there are assorted daily quests you can finish. As is the case for most anime-themed MMOs, the game has a heavy emphasis on socializing with other players. For example, there’s a furniture treasure chest you can put on your Terracottage that gives different rewards depending on how many people opened it. Naturally, this provides you with a massive incentive to invite other people into your home and socialize. 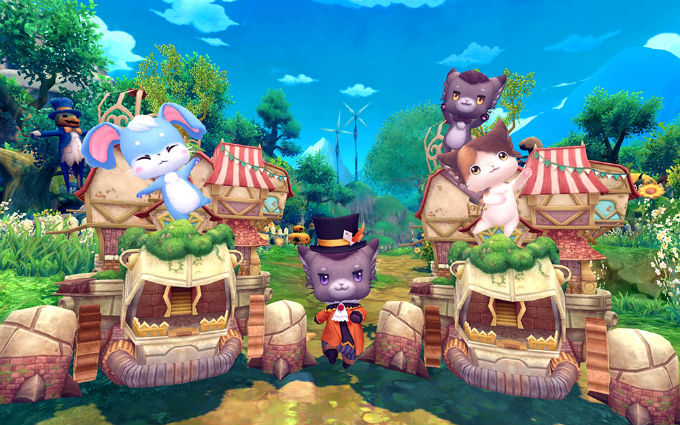 First off, the game has an upbeat anime-themed visual that’s very inviting. The cel-shaded graphics present an enjoyable oscillatory experience, and there’s a great number of emotions you can show on your character’s face. There are also many different options of costumes to wear on your character. Not only are there many ways to look different, you actually look good doing it.

The class switching is also great. Thanks to this feature you don’t need to create multiple characters since you can play all classes on one character. It also makes creating a well-balanced raid party easy since everyone can potentially be any class they like. What I really like is how it keeps the newbie area bustling. When there’s a big reason to go back to starter areas to get more experience, it tends to create a strong social environment. Since Twin Saga is one of the reviewed MMOs that also includes direct features to facilitate socialization there really is a nice sense of community.

Last but not the least, the game is pretty rich in story. Unlike other Asian based games that feature a one sentence quest dialog, quests in this game are rich in lore. You will read pages upon pages of text while questing. And no, the reading never feels tedious. In fact, while it’s nothing exceptional, I find the story pretty entertaining and interesting.

But not everything is good about this game. For one, the game’s quests suffer from extreme linearity. There’s only one massive questline, and you’re forced to take it in order. Once in a while, you can get an optional sub-quest, but that’s it. At level 10 you go to this dungeon, at level 20 you go to that dungeon, etc. You don’t have much choice.

Keeping in line with the linear design, there’s pretty much only one way to go about completing quests. Character development paths offer very little choice from the developers. As I said before, the limited number of skill tree and leveling options creates very bland character builds.

But the game’s greatest flaw is that it feels like another rehashed version of developer X-Legends’ other MMOs. I’m not 100% sure, but when reviewing Twin Saga it felt like some of the art and sound assets had been used elsewhere. The combat is also just a little too familiar. There’s not a whole lot of challenge from enemy mobs so the gameplay might feel stale to some.

All in all, Twin Saga is a fun anime-inspired MMO with upbeat visuals and nifty mechanics like mobile player housing. Unfortunately, it also suffers from theme park-tier linear progression which takes some of the fun out of exploring a new game world.

In the end, I’ll close the review strongly recommending that you try this game out. It’s not perfect but many will find the negatives to be minor. The trade-off could certainly be worth the other positives and unique features. It’s not like hotbar combat and linear quest progression is that odd for even top tier MMOs.