Uncharted Waters Online is a massively multiplayer game set in the age of sail. This open world sandbox MMO features a game world based on real Earth geography. You start with a small ship, with which you’re free to do whatever you want. Will you become a merchant and travel port to port trading for goods? Or will you become a pirate and attack other players? Maybe you just want to be a cartographer and explore the world? The choice is completely up to you in UWO.

Ship combat is a core component of this game. Ship battle comes in two types. First, there is the ranged combat. Ships can be loaded with cannons to fire against foes in combat. There are multiple types of cannons and ammunition in the game, from the standard cannon and carronade to special cannons like the grapeshot trench cannon, or the double shot mortar. The other type of ship combat is the melee battle. You can board enemy ships to seize them from the opposition. Your success depends on the quality and quantity of your ship’s crew, along with your swordplay skill. Boarding is the preferred method for piracy as you can capture the ship mostly undamaged, along with the goods.

Trading also plays a major role in Uncharted Waters Online. Ships have cargo space which you can fill up with various products. Ports all over the world have market districts, each with different local products. Players can purchase unique goods along with selling their goods, hopefully for a gain. Each region has specific prices that they’re willing to pay for goods. Trading mostly involves finding a cheap local product that will sell at a high price on another port. There are many strategies you can do for that. For example, you can take the risky route and sail to Asia, load up on spices and make a killing back in the old world. Or you can stay in Mediterranean, preferring to trade with minuscule profits but safe from pirates, storms and other disastrous events.

The last major aspect of this game is exploration. All over the world various discoveries can be found and reported for fame and fortune. The most common way to discover them is via the adventurer quest mediator present at different ports. These quests require you to have the necessary skills. For example, excavating ruins requires Archeology, while discovering new animal species requires Biology. Another way is by chancing upon a map while looking through the archives at various ports. Maps give you a map of an area, and it’s up to you to figure out which part of the world it is from and hopefully discover something at that location.

Each of these three core concepts has particular class types centered on them. For ship combat you the battle type jobs like the Mercenary, the Privateer or the Maritime Mentor. For trade, you have the trade type jobs like the Foods Dealer, the Trade Merchant or the Arms Dealer. For exploration, you have the adventure type jobs like the Surveyor, the Cartographer or the Ruin Explorer. Each job comes with their set of favored skills, but they are not exclusive to them. In general, you can learn any skill as long as you find the trainer of that skill somewhere in the world. 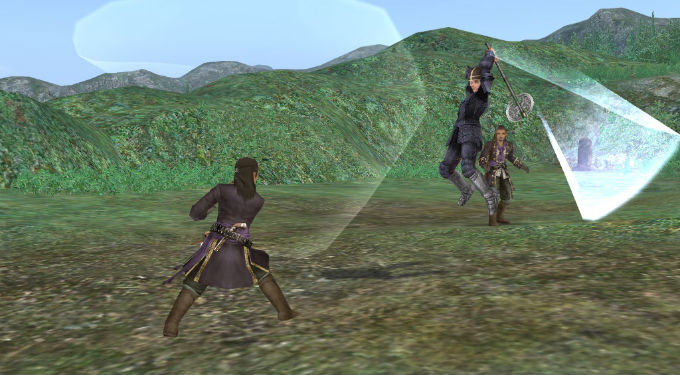 Uncharted Waters Online is an excellent game. The game has a great amount of depth to it. You can build your ships, and you can cast and make your cannons. You can own a plantation and turn the produce into finished goods. You can explore the new world and sell the resulting map to Mercator in Amsterdam. In Uncharted Waters Online, you are not limited to being a pirate or a merchant. I was genuinely impressed while reviewing this game how deep the sandbox gameplay actually was. There’s so much to do that if you find the setting interesting, it’s hard to get bored.

Another great thing about UWO is the ship handling. Sailing is a fun and active process. You have to take the wind into account along with food and water reserves and your crew’s conditions. As a result, sailing the long voyage into the ocean can be somewhat risky but is pretty fulfilling once you’ve reached your destination in one piece.

Ship combat too is fun and a far cry from MMO hotbar bloat. Every ship handles differently and has their role to play. Heavy Galleons can take and dish damage, but their turning rate and speed are pretty slow, making it a sitting duck against a group of lighter ships. On the other hand, lighter ships like the Sloop are fast, but they do not have enough firepower to take down massive ships individually. Battles are not decided on who have the bigger ship and guns, but who can helm his ship more efficiently. In this game, bigger does not necessarily mean better.

But of course, Uncharted Waters Online is not without flaws. For one, the game’s graphics are pretty dated. The graphics are PS2 tier, and it hasn’t aged well. The interface looks dated, the UI is far from polished and looks like something that someone slapped together in an afternoon.

The game also has a horrible rootkit tier DRM that doesn’t play nice on modern systems. If you’re on Windows 10, expect to run into problems running the game. The DRM conflicts with anti-virus and other security software preventing you from playing the game while those are running. Yes, most likely you will have to disable your antivirus or create some special settings to play UWO.

Hyperinflation is a pain to deal with for new players. Forget about trying to buy player made items as you will find that they’re in the millions or billions of ducats. Needless to say, this hyperinflation completely ruins the balance of classes completely. After all, why would you bother trading spices across ports for ten thousands of ducats per run when you can just craft a relatively popular item or two and have other players buy it from you for millions of ducats?

So in the end, is Uncharted Waters Online an MMORPG that’s worth playing? Well, I sure think so. While the graphics might be dated and in-game economy unbalanced, the game is still fun to play. Fans of sandbox MMOs should definitely give it a look, but themepark fans might enjoy it too. It’s also pretty educational. You’ll learn a lot about Earth’s geography while playing this game.