tl;dr – Perfect MMO for competitive players or those tired of simple content that everyone can complete, but may be too tough for casual players.
PLAY WILDSTAR NOW

Wildstar is a fantasy sci fi MMO developed by Carbine Studios and published by NCSOFT. The game was first released on June 3, 2014, initially requiring a subscription to play the game, but went free to play on September 29, 2015.

Like most MMO this game has an open and persistent world map system and is set in a world called Nexus, where two factions battle for supremacy. The game has a diverse amount of character customization options. Upon creating a character first you have to select from 1 of the 2 factions. Each faction has 4 playable races each.

The first faction is the Dominion, the Dominion is an intergalactic empire that aims to control the galaxy. The Dominion faction have 4 races. First are the Cassian, humans that are based from the british empire complete with the british accent. Then we have the Draken, a race of humanoid reptilian savages. The Mechari, like the name says, are a race of androids/robots. Lastly we have the Chua, a race of humanoid rats. They’re pretty much steampunk dwarfs that went crazy due alcohol withdrawals. The second faction are The Exiles, refugees driven from their homeworlds by the Dominion. This faction also have 4 races. First we have the humans, they’re wild west/cowboy style humans complete with the southern US accent. Then we have the Granok, a race of drunk stone golems lookalikes. Then we have the Aurin, cute humanoids with animal ears and tails. Lastly we have the Mordesh, a race of space zombies. Yup, space zombies.

Then we have the 6 classes. Depending on the race, not all classes are available. The classes are warrior, esper, spellslinger, stalker, medic and engineer. I’m not going to expound on them since they’re pretty much self-explanatory. Besides classes, Wildstar also have an additional system called paths. Think of it as subclasses. Unlike classes, all the paths are available to every race. Each path has their own unique quests, abilities and rewards. The four paths are Soldier, Explorer, Settler, and Scientist.

Combat in Wildstar revolves around a core concept called telegraphs. Basically for every attack, skills you use in-game, there’s a red zone that will appear on the ground showing the attack’s aoe. This red zone is visible both to you and your enemies. Yes, every attack is being telegraphed to everyone. Thanks to this, battles in Wildstar are hectic and full of rapid erratic movements. As an attacker your goal is to predict the enemies’ movements and make sure they’re on your red zone when your attack hits. As a defender your goal is to stay out of the red zone by the time the attack hits. This action-driven MMORPG brings the combat to the forefront of Wildstar’s positive features.

Wildstar also has player housing. You can have your own plot of land in the game. This is not only used for decorative or storage purposes but also allows you to build extra facilities such as mines, farms or craft stations. Yes you can craft items. The game has 13 production tradeskills, each focused on one production aspect such as mining, harvesting, crafting, etc. But you can’t take all of the tradeskills, you can only have 2 active at a time. Crafting in this game are done via recipes, but you can overcharge an item to make it stronger. As expected overcharging items have a high rate of failures but you can mitigate it by using better power cores or having passive skills that lower the failure rate. 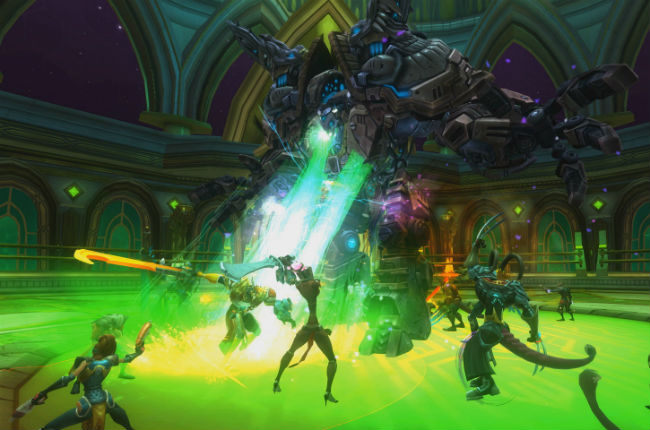 Wildstar is a fun game with a deep lore. If you’re one of those MMO players that’s heavily into lore you will enjoy this game. There’s a lot of in-game lore, and the quests have an overarching story. On the combat side, the telegraph based gameplay is really fun and hectic. This is especially true during PvP where you and your enemy is trying to out-predict each others movement. If you’re confident with your reflex and your internet connection is good you will enjoy this game.

The dwindling player base. Unfortunately Wildstar has been hemorrhaging players for a while. This is a slowly dying game, but there’s news of it coming to Steam. Whether that will save the game or not is unknown. In the end, the game is just too hardcore for most casual players. To put it in perspective only 1.2% of players have killed a raid boss. The game also requires a beefy system to play and will run like shit on average PCs.

Wildstar is a fun MMO with a lot of content and fun twitch-based gameplay. Unfortunately it’s also suffering from a dwindling population. It’s not that Wildstar is a bad game per se, it’s just that it’s too hardcore for casual players. This MMO is a legitimate MMO wrapped in a theme park’s clothing. So if can handle a deep, competitive MMO to play or are interested in the game lore, this game is for you.