Winning Putt is a 3D golf simulator MMO that was developed by Webzen and published by Bandai Namco. It was first released in the West on January 14, 2016. It stands in relative isolation as golf’s top MMO.

You probably come to this review of Winning Putt wondering what makes it different than the old Tiger Woods games or other golf sims. On the surface, it seems not a lot. It combines online golfing sim gameplay with typical RPG growth mechanics. The game uses the conventional three-click system used by most golf simulators. For those unfamiliar, one clicks starts the backswing to generate power, one clicks starts the downswing, and the last click determines accuracy when hitting the ball. Success is measured by timing each click with when it hits the green zone on the screen.

Where things get interesting in this golfing MMO review (which is a subgenre I can’t believe exists) is Winning Putt’s RPG mechanics. For one, there are three classes in this game. Instead of Fighter, Mage, Rogue, etc., Winning Putt uses the specializations Power, Accuracy, and Common as classes. The game is also stat-based. While there is no HP bar, characters have six stats which determine overall skill. For example, you have a stamina and mentality pool which decreases every time you use a skill or swing your club.

But what makes Winning Putt RPG-like the most is the presence of skills and equipment. The game has skills you can unlock by advancing in the game and each class has their own unique skills. For example, the Power class has an Overshot skill which increases the driving distance of the swing, while Accuracy has the control shot which increases the accuracy of the swing. The equipment in this game, like your caddies or your clothes, have stats. Like a typical fantasy MMORPG, you can even enchant them for additional stats. It’s odd from a realism stance but certainly works for the game.

Winning Putt is both PvE and PvP friendly. You can play alone in peace, or you can challenge other players in a game. This game has seven game modes to choose from. There are Friendly Rounds if you want to play in peace alone or with friends. Then there are Betting Rounds if you want to bet on the outcome. Another mode is the Challenge Rounds where you try to beat another player’s personal high score in the course. Finally, there is also practice mode, ranked mode, tournament mode and survival time attack where players only have 30-45 seconds of actions per turn. 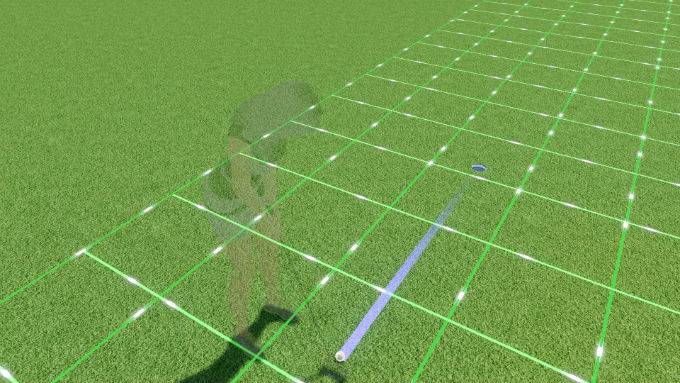 The game has a lot of customization options. There’s a slider for most aspects of your character’s appearance. You can change your characters’ body type, overall size, or individual body parts like head, arms, and legs. Winning Putt’s character creator is pretty comprehensive.

Winning Putt also has an extensive tutorial. The tutorial guides you step-by-step starting with the basics. Because of that, the tutorial is a bit slow, but it’s worth slogging through. At the end of the tutorial, you will have an in-depth understanding of how to play the game and what everything does. Even minor mechanics are explained. As a result, Winning Putt is easy to get into, especially if you’re a newbie that hasn’t played a golf sim or other golf MMO before.

The courses in this game are beautiful and graphically pleasing to the eyes. There’s no HDR, bloom, or other fancy over processed effects to detracts you from the game. The courses are pretty much all soothing to the eye. The one caveat to that is a golf course on an alien world, which feels extremely out-of-place in Winning Putt.

The player base in this game is also somehat friendly and non-toxic. They don’t usually curse you for no reason, and most people are pretty helpful. A lot of them are weird, though. The majority of the player avatars in this game are female, and most of them walk all over the place in their underwear while laughing and joking around. If you’re a serious golf player looking for a serious game, this isn’t probably for you.

Winning Putt is pay-to-win. As I said before, this game has RPG mechanics, complete with stat-based equipment. That by itself isn’t bad, but the problem is that the higher tier gears are only available in the cash shop. Sure, you can also buy them using in-game gold, but they’re priced absurdly high and will take you forever to save up for.

The game is also prone to lag which is pretty bad for a game that relies on accurate timing. Sometimes you can’t even run the game itself due to the lag. It just exits with a vague error message. The lag is fairly rare, but it happens enough to be worth noting.

The game also has some tedious mechanics which they seem to have added for no good reason. For example, your clubs have a durability that needs to be regularly repaired. Why? This is just an annoying mechanic that adds nothing to the game, especially since you can only fix the club via an annoying NPC that drones on and on whenever you talk to him.

I’m going to close this Winning Putt review with mostly good things to say. It’s a novel game that manages to mix golf simulated gameplay with RPG mechanics and has a fair amount of success doing so. The simple controls and extensive tutorial allow practically anyone to play. The courses are beautiful and soothing. Unfortunately, the game is also bogged down by some tedious mechanics along with P2W that makes the game a bit unbalanced.

In the end, I still recommend the game. After all, the game isn’t competitive. You can just play at your own pace. If you’re just interested in casual play, you don’t really need to buy the P2W gears. And the majority of the players there won’t care either. It seems like a lot of them are there just to ogle at scantily clad female characters. If you want a non-stressful game, give this game a spin. You might like it. But if you’re a serious golf player looking for a serious competitive gameplay, look elsewhere.