Bleach Online is a free to play browser MMORPG based on the Bleach anime/manga series. It is developed by Gogames.me and has been available since early 2014.

Bleach Online is one of those rare MMOs based on a legitimate anime/manga series. Like the name implies, it’s based on the Bleach manga written by Tite Kubo. Being a fan of the anime, I was pretty excited to review Bleach Online. Being a browser game though, I had some serious reservations whether the developers could do a good job.

Bleach Online, as an anime MMO, roughly follows the story of the manga but from the eyes of a new character. Gameplay is team based. You gather and recruit characters from Bleach and build a team that can defeat the enemy. The battles are simplistic and turn based, requiring no input from the player. Once a fight starts, the screen switches to a side battle view where characters from both sides just whack each other until the other side is down. Once you’ve won a battle, you’ll select from among three face-down cards for your reward. The game is mostly PvE. There is, however, a PvP mode via the arena where you fight against other player’s team, but since battles in this game are completely computer controlled, I’m not sure if you can call that PvP.

Since the game is team based, building a team that works together is important. Each of the recruitable characters belongs to one of the three roles: Support, Assault, and Vanguard. Support characters stand in the very back row, they cast various buffs/debuffs and attacks the enemies with magic. Assault are the main attacking force, they stand in the middle of the formation and attacks the enemy with their melee skills. Finally, the Vanguard stands at the very front, they shield and absorb the damage done by the enemy team. You can have up to 3 support and assault each in a formation, but you can only have one vanguard. Also, each role has a fixed location in a formation, you cannot put a vanguard in the back row, for example, they have to be in the very front row.

Characters are recruited from the tavern. The way recruitment works is a bit convoluted. First, you need to have a certain amount of soul spheres, and there are three types of soul sphere. Unfortunately, you can’t get these soul spheres by random drop or by even buying them from a shop. Instead, you get these soul spheres by winning in a rock-paper-scissor mini game in the tavern. But you can’t just play the mini-game. First, you have to buy a ticket which corresponds to the type of soul sphere you would like to win. After you have gathered enough soul spheres for the character you like, you can then recruit them. It’s an incredibly roundabout and baffling system. 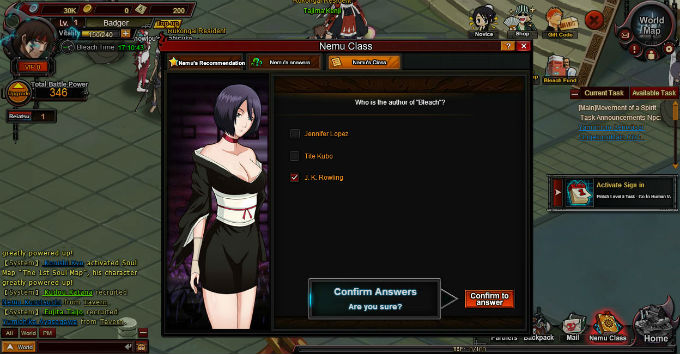 Bleach Online uses the source material to fan satisfaction. Practically every character in Bleach is in this game in one form or another. And most of the characters aren’t locked inside a paywall. Fans of the manga will happy to know players can recruit Hollowed Ichigo or Aizen without spending a dime of real money.

The battle system is also pretty good. The characters are well animated in battle. The battle animations are smooth, and each character has their own unique flashy finishing move they can use during battle. It’s also automated, which takes out the tediousness of a turn-based battle.

The formation mechanic is also a great addition to this game. It increases the strategic depth of this game. The formation system, while limiting, forces everyone to pick a well-balanced party consisting of support, assault and Vanguard characters. Without the formation system, everyone will just put the all-star characters like Ichigo and ignore the rest, which would make the game boring and be lacking in variety, especially in PvP.

Bleach Online’s translation is hilariously bad. A lot is translated directly in mass from Chinese, resulting in funny instances like Shinigami being renamed to ‘Ghost Blade’. The localization is horrible all around. On some dialog boxes, sentences are cut off in the middle. The story is laughably incoherent. It seems to be following the manga’s story, but the writing is unbelievably bad.

The game is also full of nonsensical game mechanics that has nothing to do with Bleach. For example, you have a home in this game, and it comes with a girlfriend. You can flirt with this girlfriend and even upgrade/evolve yours to a new one. It doesn’t even make sense story-wise. You’re supposed to have amnesia after being woken from cold sleep, and suddenly you have a home with a live-in girlfriend that evolves like Pokemon. It literally serves no purpose; you don’t even get sexy pictures out of it.

Speaking of sexy pictures, the game is heavily sexualized. Pretty much every female character’s portrait is heavily sexualized. But the devs did not stop there. They actually included a stripping minigame. The minigame is pretty simple. There’s a bar with an indicator somewhere in it and a cursor that moves alongside the bar from left to right. You just have to time pressing the spacebar at the right moment so that the cursor and the indicator are lined up. If you succeed, the girl will lose an article of clothing, one at a time until she’s in her underwear. Does it sound like borderline hentai? Because it is.

Like most Chinese browser-based MMOs, this game is heavily monetized. There are multiple tiers of VIP, and a lot of gameplay mechanics are made excessively tedious to make you give up and buy one. A good example is the aforementioned tavern system. The tavern’s RPS minigame is incredibly frustrating; the computer wins most of the time. As a result, it’s hard to gather the required soul spheres. Meanwhile, VIP users can buy items to you auto win the RPS minigame.

I have to conclude this review with some bittersweet final words as a casual Bleach fan. The large cast of Bleach characters is great, and the battles are hassle free for casual play. I like that strategy is on the front end with formations instead of tactical. It’s a good fit for a browser MMORPG.

Unfortunately, it’s also suffering from horrible localization and lack of direction. Also, while I can’t prove it, I think this game is unlicensed, and the sprites are ripped off from official Bleach video games. It’s apparently been running for a while though, so what do I know? So while recommend Bleach fans to look at this game, I’d say don’t get overly attached. Just to be safe.