tl;dr – Match 3 combat in a browser based MMO full of mini-games and several autoplay features.
PLAY CHRONICLES OF EIDOLA NOW

Chronicles of Eidola is a free-to-play browser MMO developed and published by AMZGame.

This game has no character customization. At the start of the game you chose your gender, and that’s it. You don’t get to pick your class. Heck, you don’t even get to name your character until later on in the game. Instead, you play as a nameless avenger stuck in hell trying to escape.

But your character doesn’t really matter. In fact, your character doesn’t participate in combat at all. Combat in this game is fought using your Eidola, summoned heroes that signed a contract with your character. You can have up to five Eidolas in battle. Each Eidola has a fixed role: either front row, back row, or support. They also possess one active and one passive skill.

Battles in Chronicles of Eidola are turn based and semi-automatic. It’s semi-automatic because you don’t directly command your Eidola to fight. Instead, you only choose when to activate their arcane skills. And the method to do so is pretty convoluted.

Every turn in battle you activate one of the three runes available. And each Eidola has a particular rune sequence associated with it. For example, Perseus has

Chronicles of Eidola is heavily PvE focused sometimes in a very intuitive degree. For example, Chronicles of Eidola’s guild battle system doesn’t pit you against other players. Instead, the game pits you against a couple of powerful raid bosses and their minions. How that is a guild battle I have no idea. There is also a game mode called Gauntlet where you fight against a successive wave of enemies. Gauntlet gives a reward every five stages, and your HP doesn’t heal between stages. The PvP content is paltry so don’t get into Eidola expecting competitive gameplay. 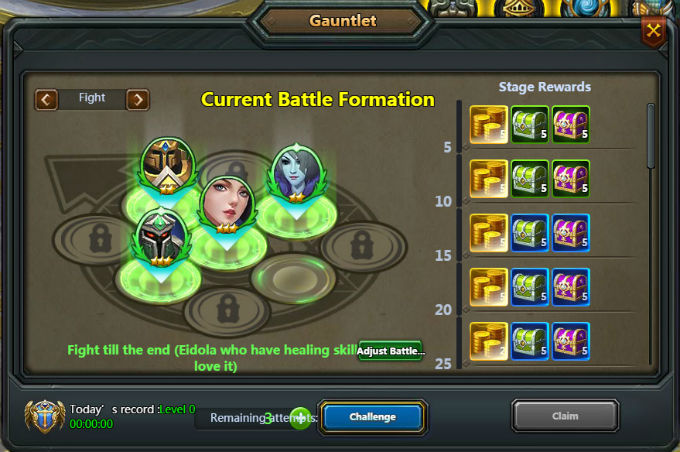 I might have come across a little negative in the Gameplay section but there are some key draws for Chronicles of Eidola. For one, there are a slew of game modes/mini-games to play. One random example is Rat Race, where you race against other players to the finish line a la Mario Kart. Another mini-game is the Orb Breaker, which is a simple Match 3 mode. Minigames give various treasures for winning.

Where Eidola really stands out compared to other browser based games is the game polish. Graphically speaking, the game is extremely well done. The game uses 3D graphics to its fullest. It’s a great experience to help you forget that the game only requires a browser. For example, near the start of the game, you fight against Lancelot in a boat. The boat rocks around while you fight and killing Lancelot transforms him into a giant flame breathing dragon that will smash your ship in two. All of this is shown graphically, in 3D, and it looks gorgeous.

Chronicles of Eidola also has a lot of playable heroes to pick. Most of the heroes are based on mythological characters so you have characters like Guinevere, Arthur, Perseus, Galahad, Roland, etc. Each Eidola has their own unique model and graphics animation. They also have their own unique skill set.

And now we’re back to the section of the review where we discuss Eidola’s flaws. For one, the game has an extremely buggy interface. Interface windows would sometimes position themselves incorrectly preventing you from closing the interface windows. Laughably, clicking on an empty part of the game screen would sometimes trigger some random button for no reason.

The game mechanics are also convoluted for no reason. Combat in this game comes down to an overcomplicated matching game. Combat requires more puzzle solving than strategy. That would be fine if the puzzles were better. Worst of all, the game doesn’t explain how combat works. Thankfully, there is the auto-battle feature. Use it.

Like most of these browser-based MMOs, the game also suffers from repetitive quests. Nearly all quests are either talk to this character, harvest this item X times, kill X mobs. They don’t even tell you why you’re doing so or where to go. The game expects you to use the auto-questing option to do the quest for you. You are not playing the game; you are watching the game play for you. This does make it a good game to play while at work at least.

Chronicles of Eidola also suffers from lag from time to time. You don’t even see the enemies 90% of the time in the overworld map. You just see the mobs lag teleporting in front of you and the next second you’re on the battle screen. It gets pretty annoying after a while, especially since you need to do a lot of walking in this.

Chronicles of Eidola is a game that tries to set itself apart with great animations and a unique combat system. That resulted in a game that features beautiful 3D graphics while being full of mini-games. Unfortunately, it also resulted in a game with convoluted gameplay mechanics and a buggy interface. For a free MMO playable from a browser, there are certainly worse options out there.