Closers are a free-to-play side-scrolling MMO developed by Naddic Games and published by En Masse. The game went open beta on December 19, 2017. This is a Closers review for the Early Access version as of January 2018.

Closers is a bit different from your traditional MMORPG in that the game is played from a sidescrolling view mode. And unlike most MMOs, the game controls are keyboard-centric. You use the arrow keys to move your character around the map, while you use the Z key to launch a combo attack and the X key to jump. Meanwhile, the remaining left part of the keyboard and space are used to launch skills.

Character customization is non-existent. Players must select from one of the six preset characters you get to play as. While many may lament the loss of personalized characters, each has their own distinct appearance, background story, and play style. One such character is Sylvi, the telekinetic caster, who can float random objects on the map to use as projectiles, while J’s skills deplete his HP on use.

Closers stands out from the crowd due its battle system. Considering En Masse publishes TERA, which also boasts an action combat MMORPG system, this perhaps isn’t surprising. They seem to be finding their niche in the twitch based combat crowd. Instead of a 3D combat system though, Closers harkens back to the side-scrolling beat’em ups, reminiscent of old arcade games like Streets of Rage.
The game is hub based. Players take on missions from the central hub which teleports you to an instanced stage. The stages are linear, and you fight a predetermined numbers of enemies. Each stage is divided into sections, and you can only advance to the next section after you have defeated all the enemies on your current section. At the end of the stage, there is a boss battle.

But Closers is not just a multiplayer beat’em up game. It is an actual MMO with actual MMO mechanics. First, your character can equip pieces of equipment. And like most MMOs, you get these pieces of equipment as quest rewards, item drops, etc. You can also upgrade your equipment, which adds a +1 to their name. Also, a tuning mechanic allows you to give your equipment random passive effects. A pet can also be summoned in battle to fight alongside you.

As your character levels up, you earn SP to learn and upgrade new skills. Each character has their own unique skill sets in addition to generic skills. Skills are locked by your character’s current rank: a trainee character can only learn trainee skills while an intern char can learn both trainee and intern skills. You advance rank by completing a promotion quest.

As you might expect, Closers is PvE focused. Since each mission is instanced, you tend to play the game alone, but cooperative play is possible with other players. There’s something about beat ‘em up style combat that’s just really fun with a group of friends. For players who really need some element of PvP, a 1v1 dueling arena also exists. 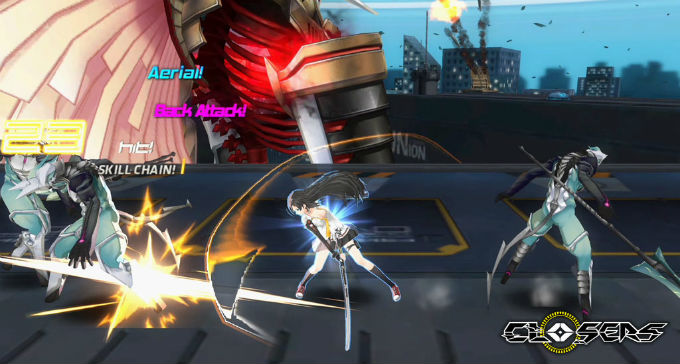 Closers is a really fun brawler. All you need to combo your attacks is just to press the Z buttons. Your skills also have their own dedicated key, so you don’t need to memorize any key combinations. As a result, this game is just plain old beating up your enemies by button smashing keys. It’s fun, refreshing, and perfect for casual play.

The game’s six (and growing) cast of characters all offer a truly unique play style. Every character has something to it, and no two characters are alike. Thus, each character brings something new to the table to try out. Their fighting styles are also pretty stylish and bombastic. It looks like something out of an anime, which coupled with the cell shaded graphics make it fit well artistically.

Speaking of which, Closer’s cell shaded graphics are quite excellent. The characters are beautifully modeled and are full of emotions. The monsters too look great. They come in various shapes and forms but they look vicious and menacing, especially the bosses.

The Closers stage design is pretty boring. The stages are completely linear and only the backdrops change between them (so no interesting interactive elements). They all follow a single pattern: a linear stage divided into sections with a boss at the end. It gets tiring after while since there’s no variation. They tried to make it look dynamic by making the path move diagonally up or down instead of straight right, but all it does is make it harder to hit enemies.

The game also requires a lot of grinding. Like most MMOs, you need to upgrade your equipment to fight harder enemies. Unfortunately, upgrading stuff has a chance for failure that increases based on the item’s upgrade level. Even worse, the main way you get the items needed for upgrading is by dismantling other items. Both dismantling and upgrading also require gold. As a result, you will need to grind a lot not just for the item but also for the gold, just to get a passable item.

Closers also sells various costumes you can buy with real money. Unfortunately, these costumes are not merely cosmetic; they also give a massive boost to your stat points. You also need to upgrade these so prepare to spend more money. At least since this game caters to the PvE crowd, the imbalance isn’t as painful as some other MMORPGs.

In my opinion, the greatest flaw of Closers is the stamina/fatigue system. Similar to mobile titles, Closers limits how much you can play by capping your stamina weekly. If you spent all your stamina on Monday, you’re going to have to wait until next week to even play. It’s a frustrating system that cuts off the gaming earlier than it should for more hardcore gamers. Casual players should still find the system tolerable though so your mileage may vary.

Closers is a fun, cell shaded sci-fi MMO with beat ’em up gameplay that’s full of unique playable characters. This is offset negatively by bland stage design and in grind-heavy advancement. The stamina system will be frustrating for hardcore MMO players.

So in the end, is this game worth playing? Yes if you’re a casual player. The core gameplay is a ton fun. I really liked hopping on and playing with some friends. If the stat increasing costumes and fatigue system doesn’t bother you, definitely give it a whirl. The gameplay is a refreshing as anything I’ve tried recently in the MMO space.