Crossout is a vehicular sandbox free to play MMO developed by Targem Games and published by Gaijin Entertainment. It went open beta on May 30, 2017. The following review of Crossout is based on time spent playing in the open beta, as well as gauging community feedback and developer responses.

Crossout is a multiplayer vehicular combat action game. It’s a third person shooter, but instead of controlling a guy, you control a vehicle. The controls are standard FPS fare.

But what sets Crossout apart is its post-apocalyptic world, similar to movies like Mad Max. And that means you get to build your own vehicles from various scrap and junk parts. You have to create a frame, attach an engine, attach some wheels or some legs, attach some weapons, and maybe some armor. Not only is the customization really well done, it scratches the crafter itch in a way a lot of games fail at.

I was also surprised to find out that Crossout is physics based. Unlike most other games, you can’t just attach the largest guns or the heaviest armor in your vehicle and call it a day. You have to take actual physics into account, such as making sure your ride has a good center-of-gravity or that your wheels are leveled and firmly on the ground. A vehicle that is top heavy can make your vehicle roll over easily, while a heavy armor will cause you to slow down. The level of interesting design decisions this added cannot be understated.

Weapon recoils have to be taken into effect too. Sure you can attach a big cannon to a light vehicle, but you’ll not only find your vehicle horribly off-balance, but every shot will also have horrible recoil. It’s pretty hilarious to flip your car from a cannon shot, but it’s not a sound long term strategy.

The game has five main factions to join. Your level and what faction you are in determines the parts you can craft/unlock. Each faction has their own unique ideology, focusing on one distinct play style. For example, the lunatic factions focus on light, speedy vehicles that deal massive explosions. Their cars best resemble the ones you’d see in Mad Max.

Crossout has multiple game modes. First is mission mode, main PvP mode. In Mission, two teams of players fight against each other to capture various points on the map. Mission mode drops the most common parts in-game.

The second mode is Raid. Raid mode is the game’s main PvE content. In this mode, a team of players fight against a horde of AI scavengers. Raid has multiple campaigns available, ranging from easy to hard.

The third mode is Brawl. Brawl mode is simply deathmatch. There are two types available: Free-for-all which is the standard deathmatch and Storm Warning. In Storm Warning, not only do you have to fight against other players, you have to avoid the storm that’s ravaging the map. It’s a neat touch to mix things up compared to other online FPS games.

The final mode is Clan. As you can expect, this is the game’s competitive mode. Clan mode gives the highest tier materials which you need to craft the highest tier vehicle parts in the game. 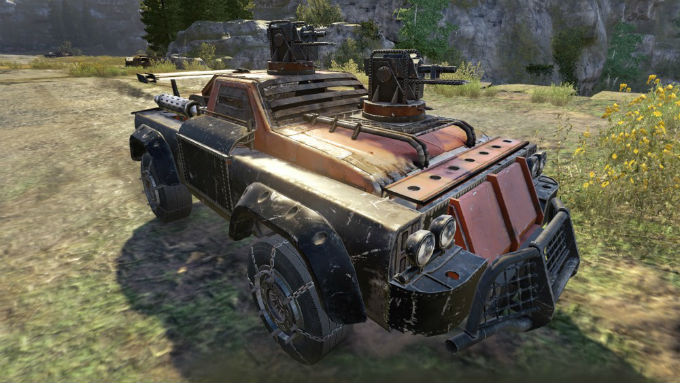 Crossout’s biggest strength is its vehicle customization. You can do pretty much anything you want. If you want a six-wheeled vehicle, you can do it. If you want to forgo wheels and just attach legs instead, well you can do that too. The only in-game limit is that your engines must have enough energy to power the parts you’ve added. But energy is just one piece of the puzzle.

Like I said above, players must take actual physics into account when designing vehicles. You can have a heavily armored vehicle, but leave one gap between the armor, and a lucky bullet hit could spell the end for your vehicle. And even if you don’t leave a gap, the enemy could just take out your wheels, turning you into a sitting duck.

The other big draw of Crossout’s is its art direction. Sure there are other games that feature vehicle customization and physics based combat, but they tend to be pretty generic and dry. You’re just assembling rectangular boxes with various weapons tacked on. Not in this game. Every faction in this game has a unique art style.

On that note, the faction system is pretty cool. It helps draw you into the lore of the world a little bit more and is reminiscent of Mech Warrior. Choosing which faction to fight for also has some major ramifications for building a vehicle. It’s these sort of choices that really help Crossout stand out from a crowded MMOFPS space.

Unfortunately, Crossout can sometimes feel grindy. There are a lot of parts in this game and customizing a vehicle to your liking takes a lot of matches. As a result, you might feel the grind start to set in. It’s even worse for the higher tier parts. These require the most scraps and some high-level materials only drops on certain maps and modes.

For example, you have a fuel bar in this game, which functions similar to stamina bars in Facebook/social games. This fuel bar refills every day and is used to start/join a raid. Once you’ve run out of fuel, you’ll have to either buy more fuel or wait for a day until it replenishes. Right now, only Raids use fuel. Hopefully developers won’t extend that to other modes.

But even the other game modes that don’t use fuel have some restrictions. For example, Brawl can only be played at certain times. You’d have to be playing at a certain specific time to join the match. Why? I don’t know.

Crossout is also pretty lag-prone. You will experience lag depending on your server and the number of players involved. Full player matches almost always lag. You need to have a fast low latency connection to play this game to the fullest. Optimization has improved over time and it’s likely this will be ironed out for the most part sometime after posting this review.

Crossout is an innovative and fun game that features extensive vehicle customization and physics based combat. The grind might get to some but casual players should be plenty fine. It’s unclear whether or not the game will go pay to win. So far it’s safe, but developers can easily change this. That would be a shame because Crossout is one of the most fun MMO games I’ve reviewed in a while.