Dragon Blood is a free to play browser-based MMO developed and published by 101XP. It was first released on Apr 11, 2016. It’s still free to play. This is its story.

Dragon Blood is played from an isometric 2D view perspective. Dragon Blood is made in Flash, and as a result the controls are quite simple, requiring only the mouse to play properly. There are a lot of similarities here to other browser MMOs we’ve reviewed, but thankfully Dragon Blood is not a complete genre rip-off.

At the beginning of the game, you select from one of only two classes: Mage and Knight, along with your character’s gender. Unfortunately, both classes play similarly. The mage class in this game is just another melee class that has a slash as its primary attack.

Combat in Dragon Blood is turn based. During combat, the game switches to a side battle view “Heroes of Might and Magic”-style. There’s a 30-second timer to input orders each turn. In general, battles have no turn limits, but players are rewarded for killing enemies in fewer turns.

There is no concept of mana or MP in Dragon Blood like in other fantasy MMOs. Instead, a rage bar will slowly fill up when you’re hit or use a basic attack. All skills except for the starting one consume a certain to rage to cast. Rage also persists between battles.

The game is mostly PvE. There are various cooperative modes available but Dragon Blood is much more of a solo affair. Don’t expect to be doing a lot of multiplayer gameplay in this multiplayer game. There’s also an arena where you “fight with other players”. However, opponents are computer controlled so it’s hard to call it legitimate PvP. 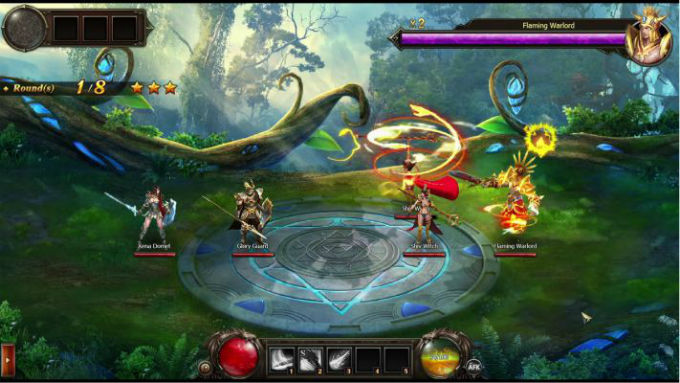 Dragon Blood is extremely easy to get into. Like other browser games, it can be played from anywhere in the world. Once in the game, actions gradually unlock one-by-one depending on your level, so you don’t get overwhelmed at once. There’s never a question of difficulty of actually playing Dragon Blood.

The turn based combat is quick and fun. They don’t bog you down in minor details. You only need to select your attack, and that’s it. Thanks to this, the battles are quick and last less than 5 minutes each. There’s also an auto-battle option to auto-resolve turns for more trivial battles.

Raising party members is also enjoyable. Leveling them only requires EXP berries, which are a standard reward for crypts and dungeons. You don’t need to put the level 1 companion in your party and grind manually. As a result, raising party members in this game isn’t tedious at all.

Dragon Blood also has an unexpectedly good localization in it. The English in this game doesn’t have any grammar or spelling errors. And the in-game text is all understandable. This game is a far cry compared to other localized Chinese-based browser games.

The visuals in this game are uninspired. It’s impossible to discern Dragon Blood’s from other Chinese-based browser MMORPGs. It looks as generic as they come. The animations are also bad, and the movements don’t look natural. I mean, they look like they’ve recorded movements with a subpar gif program. The animations are jerky, and you can see the dithering on some frames.

Dragon Blood’s quest system is bad. It has the standard Chinese browser MMO quest system where you walk and talk to an NPC every 20 steps. Now there’s an AFK mode where your character automatically moves to the NPC, but you still have to manually click the dialogue box to continue. What’s the point of the AFK mode if you have to be physically present to continue?

There’s a lot of stuff to do in this game, and some of them are tedious as heck. For example, you have stamina points and entering a dungeon consumes 30 stamina points. If you run out of it, there’s a daily quest you can do, which involves fighting 4+ distinct enemies scattered all over the map just so you can recover one stamina point. It really takes grinding to a whole other level. Then you realize this is how the pay-to-win component was conceived. They made some part of the game so tedious players will just say “screw this” and shell money for whatever they want to do. And I think it’s pretty effective too.

As a wrap-up, Dragon Blood is a relatively fun browser-based MMO that has a quick turn based combat, hassle free NPC raising system and excellent localization. Unfortunately, it also suffers from uninspired graphics, a poor quest system, and some horrible pay to win mechanics.

But in the end, is it still worth it? If you’re just there to play casually, yes. The game is fun, and raising your companions is hassle free. But I don’t recommend spending money on this game. Thank you for reading our Dragon Blood review.