Dragon Nest is a traditional fantasy MMO mixed with twitch-based gameplay. Played from the third person perspective, the controls are pretty standard for an action MMORPG. You use the WASD keys to move your character along with mouse buttons to execute regular and special attacks. The game has nine classes available: Warrior, Archer, Cleric, Sorceress, Tinkerer, Kali, Assassin, Lancea and Machina. In addition to that, each class has two different class advancement paths which also has two separate advancement paths.

As a result of this branching system, the game has around 40 endgame classes. Unfortunately, character customization suffered as a result. The game doesn’t have much in the way of unique appearances, and you can also only change minor attributes like hairstyle or eye color. Additionally, each class is also gender locked.

Dragon Nest’s combat is entirely action based. There is no auto-targeting, there is no evading by stats. Instead, you have to move your character around to evade, and you have to aim your attacks to hit. Hitboxes feel generous but not so much that it’s a detriment to those who enjoy truly skill based combat.

Another unique aspect of Dragon Nest is that it’s not an open world sandbox. Except for the hub city, all the dungeons and maps in the game are all instanced for you. That includes the overworld field maps. You have to be in a party with another player if you want to see each other to play together outside of hub cities.

As you might expect, the game focuses on PvE content, and the majority of the content can be done solo. PvP exists, but it’s just a minor part of the game. For PvP, there’s a PvP arena you can enter which have different game modes: a free-for-all deathmatch, a team CTF mode, and a Ghoul mode where a couple of players turn into powerful ghouls and the others into weak humans. 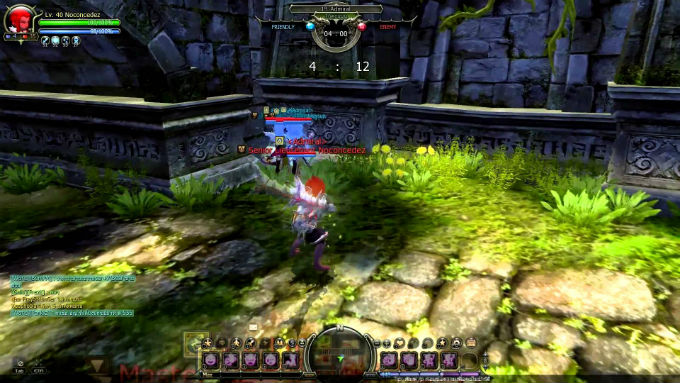 One of Dragon Nest’s main draw is the fast-paced combat. Combat is hectic and requires a lot of quick thinking and reflex. What sets Dragon Nest apart from other twitch based combat systems is that it’s neither unforgiving nor a complete cakewalk. You don’t need some e-sports level reflex skills just to play the game, but random button mashing won’t get you far either. Dragon Nest managed to find the sweet spot in difficulty. The way that players can chain off abilities with manual aiming feels very satisfying.

The story is surprisingly compelling. There are some twists and turns that are very unexpected, especially for a game that looks so cute. It starts off pretty slow, but give it a chance and you’ll be rewarded.

Another good thing about this game is the low system requirements. All you need is around 1GB of ram and any video card, even a video card released 15 years ago will do. As a result, you can pretty much play this game on any PC that runs Windows.

What I really enjoyed about Dragon Nest is the large number of playable classes available. There are nine main classes which branch into four subclasses each, giving you almost 40 distinct classes to choose from. Each class is truly unique with their own distinct skill trees featuring skills that are both flashy and beautifully animated.

Unfortunately, the game’s graphic are a bit dated. The 3D graphics still look passable when zoomed out, but if you zoom in you’ll see how dated it is. For example, the hands are modeled as a bunch of rectangular blocks instead of actual palms and fingers. The grass is a bunch of 2D cutouts that looks pretty out of place, and the ground is composed of some horribly blurred grass texture.

Another main problem with this game is the low player base. There are not many players left playing this game. I admit this isn’t really a big problem in this game since most of the content can be done solo and the games itself is instanced based. Still, it’s pretty demoralizing going back to an empty hub world. It’s like visiting a ghost town, a feeling that is both sad and eerie.

But arguably Dragon Nest’s most significant flaw is the repetitive and uninspired dungeon design. Every dungeon follows the same pattern: you follow a linear path facing random mobs on the way all the way to the end where you fight a random boss. And even worse, the dungeon’s aesthetics looks pretty similar. They just recycled the same mobs, the same objects, the same textures, the same environment over and over.

Dragon Nest is a fast paced twitch based action MMORPG that boasts almost 40 distinct classes. Players of all skill levels can take part in the fun, frantic combat of Dragon Nest. Unfortunately, the game is past its prime. The graphics are dated, and the player base is pretty low.

In the end is this still worth playing? If you want to play an action RPG and either like playing solo or have a group of friends, then yes. The lack of player doesn’t really matter much in the grand scheme of things since the game is instanced-based in the first place. The graphics are also still tolerable thanks to the anime art style. If you are hoping to meet people though, then I might suggest looking at another free MMO.