Duelyst is a tactical RPG trading card hybrid developed by CounterPlay games and published by Bandai Namco. It’s easiest to describe it as a cross of Hearthstone and Fire Emblem. While that’s not entirely accurate, fans of CCGs and grid based tactical combat will really enjoy Duelyst.

Duelyst is a collectible card game where the board is a 9×5 combat grid. Each player starts with a general on the board and hand of summon, equipment, and spell cards. The goal of this game is to kill the enemy general. The general itself is unique to each race and has 25 health and two attacks. There’s a 90 second time limit per turn, which feels about right.

Each player brings a deck with him into battle. This deck must be composed of 40 cards with a max of three copies of the same card. There is an action bar at the bottom of your screen with six slots. Every turn a card gets randomly drawn from you deck as long as there is an empty slot to fill. You start the game with two mana (3 if you go second) and each turn one mana gets added to your income. This mana is consumed every time you play a card. Each card has a cost a certain amount of mana to deploy and like most CCGs, mana does not persist between rounds.

There are three types of cards in Duelyst. The first and most common type are minions. Minions are your troops. They can only be summoned on your control zone, the one tile area surrounding your general, or minions on the game board. Every turn, every minion on the game board that wasn’t summoned this turn can attack and move once each in any order. The second type of cards is Spells. Activating a spell grants various effects depending on the spell card.

The last type of cards is Artifacts. Artifacts cards are equipment that can only be equipped by your general. A general can only equip up to three artifacts. Equipped artifacts have a durability of 3, and it decreases by one every time your general gets attacked.

Duelyst has six factions in the game, each with their own unique cards and specializations. For example, the Songhai have a lot of powerful spells, but their minions are weak. The Vetruvian focuses on obelysks, immobile minions that do not attack but summon other minions on the battlefield. Unlike most other CCG games, you cannot mix decks from different factions.

The game has three game modes. The first is Training Grounds, which is the games tutorial mode. Besides that, Training Ground also holds daily challenges, a puzzle-like mode that requires you to defeat an enemy in one turn. It’s probably the most rewarding PvE experience I’ve played in an online CCG.

The second and the main game mode is the ranked ladder. In ranked play, you compete against another player for chevrons. You gain one chevron from winning a match, and you lose one chevron from losing. The amount of chevron you have determines your ranking. At the end of the season, you get a reward depending on your rank. Like Hearthstone, seasons last for exactly one month.

The third and last game mode is The Gauntlet. Unlike ranked play, this game mode isn’t free and requires 150 gold to enter. In this mode, your deck is randomly generated. You are shown three random cards from which you can only select one. You do this until your deck reaches 30 cards. Afterwards, you battle other players on the Gauntlet. This game mode ends when you reach 12 wins or 3 losses, whichever comes first. Gauntlet gives the most rewards out of all the game modes. Again, just like Hearthstone. 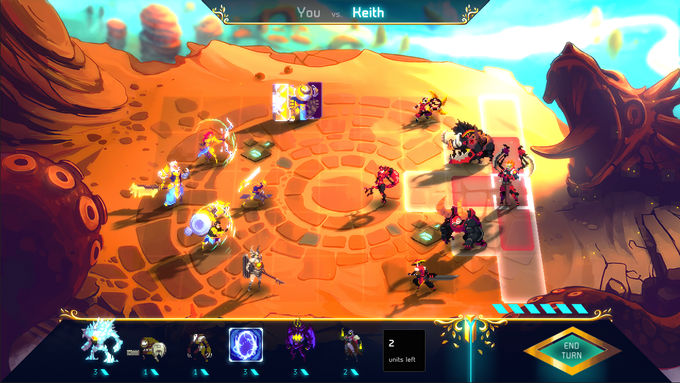 Duelyst has great graphics. The pixel art is beautifully drawn and animated. There’s a lot of detail, and every minion has unique pixel art. The particle effects like smoke, etc., are all wonderfully rendered, and they mesh well with the pixel art. If you like pixel art, this game is a treat.

The greatest draw of Duelyst though has to be its depth. There’s a broad range of strategies and tactics to employ in the game. Each faction offers unique options with a number of viable decks to suit differing play styles. Even playing the same deck will bring about different results from round to round based on opponents and draw order. All of this combines to deliver one of the best experiences among competitive online strategy games.

Discovering that depth when reviewing Duelyst felt pretty easy due to the multiple wikis and websites dedicated to discussing strategies and compositions. For those who prefer videos, YouTube strategy guides are a dime a dozen. I appreciate the freedom and control the game offers, but all of the guides made getting started a lot easier than some other less supported CCGs.

Another amazing thing about this game is that it manages to be fast paced despite using turn based tactical RPG combat gameplay. Matches typically last less than 10 minutes. My concern for my Duelyst review was that I’d need to spend a lot of time just to figure out the game. Those fears never materialized though. The game surprised me by never bogging down even with slower opponents.

Like every other CCG, acquiring new cards can feel like a grind. Then there’s the monetary option to bypass that. For the most part, I felt the rate of card acquisition was fair. A win earns 15 spirits orbs of the 100 needed to buy a pack. That doesn’t sound super appealing (though 50% better than Hearthstone). However a first win of the day bonus plus quests speed that up nicely. I reviewed Duelyst and found that I acquired cards about 40% faster than Hearthstone. I will say that those looking to compete at the highest level will likely want to fork over some money to build decks at a reasonable pace. Each pack includes five cards and some pretty specific ones are needed. Of course crafting is always an option, but it’s a resource that takes time to build.

The game also implemented region locks for some reason. It didn’t use to be that way. It got implemented after Bandai Namco bought the game. As a result, the user base got fragmented, and some players from can’t even play the game anymore. And even if you circumvent the region locks using VPN, etc., you will get banned. The current management is pretty ban heavy. I don’t know the reason for Bandai Namco’s draconian measures, but I do know that it’s really hurting the game.

Duelyst has to be the deepest CCG I’ve played online. The tactical grid adds a completely new element to the gameplay that makes other CCGs feel shallow by comparison. Matches don’t tend to take much longer either, and it’s a lot easier to overcome a better deck with skill here. While I’m not a big fan of pixel art, Duelyst does it as well as anyone. The only downsides in my opinion is that acquiring cards in yet another online CCG is a pain and that Bandai Namco implemented region locks. Duelyst is one of the best CCGs to release into a very crowded online CCG market, and I hope they stand the test of time.