Elder Scrolls Online is a fantasy MMO published by Bethesda Softworks and developed by ZeniMax Online Studios. It was commercially released on April 4, 2014 and has recently seen a huge update in the form of One Tamriel.

Skyrim. Oblivion. If you’re a gamer of any kind you’ve probably heard of them. After all, they’re one of the most popular western RPGs around. But as popular as they may be, they’re only single-player. So Bethesda created Elder Scrolls Online, an MMORPG that’s heavily inspired by Skyrim, Oblivion and other games from the TES series.

There are nine races available, separated among three factions. Khajit, Bosmer and Altmer are available for the Aldmeri Dominion. Bretons, Redguards and Orsimer for the Daggerfall Covenant, and Argonian, Dunmer and Nord for the Ebonheart Pact. These races should be familiar to anyone who played TES games before. Similar to WoW, these three factions are at odds with each other.

ESO has a lot of character customizations available. Not only can you change your character’s height and hairstyle, but you can also customize it further and change the size of his torso, the size of his head, his belly, leg, hips and even his butt among other minor things. You can make your character a fat obese guy or a heavily malnourished one if you want to. In addition you’ll find tattoos, jewelry, and facial features to modify.

The game’s skill system is pretty unique. Each skill belongs to a skill line and using a skill increases its proficiencies. But it doesn’t just increase the proficiency of that skill, it also increase the proficiencies of all the skills in that skill line. Skills all require a skill point and a prerequisite number of proficiency points in a skill line. Skills are limited since players will only have 6 available at a time (12 after weapon swap is enabled at level 15). They also have no cooldown, so picking the right set of skills is essential. However, to add to the depth each skill can be morphed which further adds to the depth. It’s a fantastic freeform system that is one of the best in the MMORPG world.

The game is also pretty unique in that any class can equip any weapon. There are four classes in the game: the Dragonknight, the Templar, the Sorcerer, and the Nightblade. Each class has access to their own class-based skill line, but the weapon and armor proficiency skill lines are available to everyone. That means you can be a broadsword wielding Sorcerer in Plated armor if you like.

After you’ve reached level 50 you gain a champion point for every 400,000XP gained. This champion point can be used in the Champion system which gives you powerful passive abilities. The system is divided into three categories: Soldiers, Mages, and Thieves. These champion points are account wide.

The game offers both high quality PvE and PvP content. For PvE, there are quests, dungeons, crafting, public events, and exploration. For PvP, there are three factions in game are constantly at war with each other. There is a separate part of the world (Cyrodiil) set aside for PvP so players can avoid it if they desire. PvPers play by capturing keeps and other locations for their faction while the players on an enemy faction will have a defending quest for it. Its pretty dynamic. ESO does a great job of rewarding teamplay in PvP. 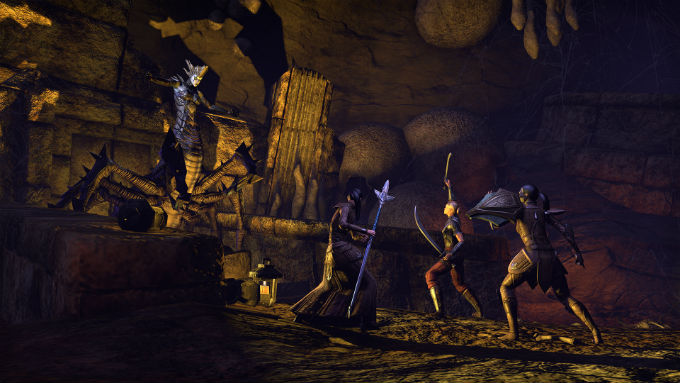 The game’s UI is well done. It doesn’t clutter your viewscreen and only shows the minimum required info. Certain elements, such as HP/MP bar, disappear or reappear defending on need. For example, the HP bar automatically hides itself when you’re in town. The UI is also customizable with various player add-ons, in case you don’t like the minimal look.

ESO is also pretty unique among MMOs in that it has full voice acting. Pretty much every quest in the game is fully voiced acted. And these are not voiced by third rate ham actors, they’re voiced by actual professional VAs. As a result, ESO’s game world feels immersive. ESO is one of the few reviewed games that I genuinely find myself interested in the story part of quests. It’s easy enough to skip quest dialogue, but characters tend to draw you in to their story regardless.

The amount of choice in this game in this game is staggering. First, there’s both solo and group content to appease both player groups. There’s a also ton of content, all of which is available from character creation because of One Tamriel. One Tamriel is ESO’s latest update that level scales the entire game. You can read our One Tamriel ESO review for greater detail but know that it makes exploration much more freeing. In addition, there’s about two hundred active skills and the same number of passives. Spending skill points is actually a tough choice in ESO, and there’s a ton of customization to be had here.

On that note of choice, quests in this game have actual consequences. Quests in ESO aren’t linear. They have choices which force upon you a moral quandry. On one quest, you are tasked with finding and delivering a crown to a certain lady. Along the way you find that she’s greedy and evil. Now, do you take the true crown to her, or will you take the cursed crown?

Of course, since this is a TES game, nothing is straightforward. Give the cursed crown to her, and you will find that she will make her servant touch the crown person, damning and imprisoning the hapless servant forever. Give her the true crown, and know that you will be complicit in aiding her greed.

As with everything, this game has a few flaws. For one, Elder Scrolls Online’s client+update is a 20gb+ download. This is a pretty hefty download, especially for those under bandwidth cap.

The game world is heavily populated and One Tamriel lets you quest with anyone. However, the game is very solo centric. Choices you make on quests also only affect your world. So playing through as someone to expects an ever changing world might be disappointed. However, it feels like a fair blend for an MMO.

The lack of cooldowns might also be considered a negative. Some abilities will be downright useless because they don’t deal as much damage as another. This should lead to easier build decisions, but it can be hard to assess what’s best for a build.

Elder Scroll Online is an excellent entry to the TES series with its excellent UI, full voice acting, fantastic character progression, and a dynamic world that changes according to the player’s actions. The flaws are relatively minor. In the end though, Elder Scrolls Online is one of the best MMORPGs that I’ve reviewed. And for under with no monthly fees, I think it’s something anyone looking for an MMO should try.