Forsaken World is a free to play MMO developed by Perfect World Entertainment and published by Arc Games. This Forsaken World review was originally written in December 2017. The game itself first released on June 14, 2011.

Forsaken World has a bit of a peculiar development history. The game was originally developed by Perfect World, a Chinese game developer, in conjunction with other teams spread across four continents. Forsaken World was, from the start, developed with the NA audience in mind. Hence, the vampire class. In a way, Forsaken World is as much a Western and as an Eastern MMO.

This Eastern/Western hybrid MMO features a lot of character customization options. The game has seven distinct races: the standard Humans, Elves, and Dwarves, the golem-like Stoneman, the werewolf-like Lycan, the goddess-like Kindred, and the Demons. Cosmetic options include hair color, skin color, body features, and flairs (i.e. cosmetic accessories like eye patches, beards, facials tattoo). Flairs are unique to each of the races.

The races in this game are not merely cosmetic. Each race has two racial skills each and determine available classes. There are ten arcane and gothic themed classes, some of which are further locked by gender. For example, the Priest class is only available for Humans, Elves, and female (not male) Lycans.

Forsaken World has a fixed stat growth so no choices there. Each class has access to three talent trees that unlock at level 20. For example, the Assassin talent trees are Venom, Edge, and Dark. Venom focuses on bleeding damage and various poison debuffs, Edge focuses on crits and stuns, while Dark focuses on evasion and invisibility. Picking one talent tree won’t lock you out of the other two, but since you have a limited amount of talent points, it tends to be optimal to specialize in one.

Forsaken World is mostly PvE with crafting and grinding, but there is a significant number PvP modes. Some of the servers have Open world PvP, which allows you to attack anyone on the map. You can also challenge other people to duels. Guild Wars and a casual CTF mode round out the available PvP options. 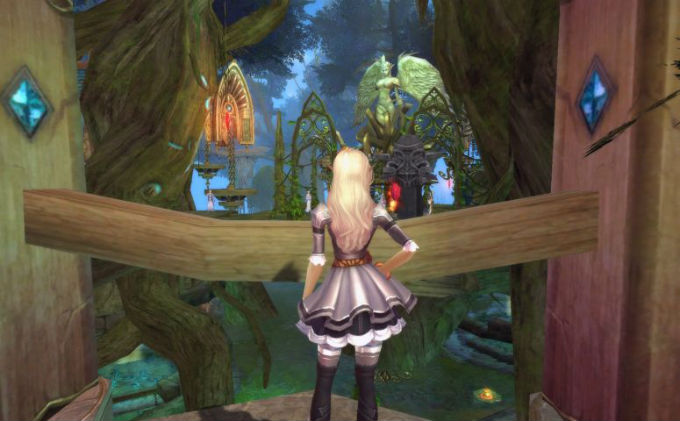 I loved the wealth of races and classes. All the classes play very differently from one another, which adds further longevity to the game. Even somewhat gimmicky classes like the Vampire stands on their own. The races aren’t a huge factor in play, but I enjoy the throwback to a classic time where each race had their own strengths and weaknesses

I briefly mentioned crafted earlier, and it’s actually a strength of the game. There’s a lot of productions jobs to choose between. I’ll just list them off to see if any strike your fancy: Botanist, Alchemist, Chef, Fisherman, Socialite, Miner, Artisan, Adventurer, Tamer, Merchant, Scavenger, Weaponsmith, Armorsmith, and Jewelcrafter. You can have multiple jobs at the same time, as long as you have enough job points. As you can see, it’s pretty extensive, and crafting plays a large role in game.

This is also divisive, but Forsaken World includes a built-in autopilot to run quests. All you need is one click, and the game will move your character to the NPC, move to the field and kill the required mob, then go back to the NPC for the reward. It takes the tediousness out of quest grinding.

Leveling into the late stages of Forsaken World takes…forever. While you can get to level 40 in about 10 hours, it grinds to a halt after that. I’d estimate a couple hundred hours to reach level 100. Even with the built in farming bot, the game is an extreme grind fest at the later levels.

While I love the class diversity, they are poorly balanced. PvP is dominated by a couple of classes, and the Perfect World Entertainment clearly doesn’t care to balance it. Their focus seems more on Forsaken World enticing people to spend money. The cash shop sells items that increase masteries and resistances straight up. As a result, free players doesn’t stand a chance in PvP, even with the same gear. Supporters of Forsaken World will note that you can grind for these resistances and masteries, but as I said earlier – that takes forever.

But that doesn’t matter in the end because you’ll have a hard time finding someone to PvP against. The game has an extremely small player base. The ones that are there are AFK level grinding so you rarely actually play with anyone. This is the biggest detriment to starting up Forsaken World. At least you know Perfect World is committed to keeping the game afloat if even small numbers won’t cause them to cancel it.

Forsaken World has a lot of good things going for it. It has a large amount races and classes, along a sizable amount of production sub-classes. It also has an auto-pilot system that removes the tediousness out of quest hunting. Unfortunately, it also suffers from horrible grind, unbalanced classes, and a severe lack of players. I’d say its best played as PvE idle game. Building characters can be fun and we MMO players like to see our power growth. For anything more, take a look at some of the other MMO games.