Heroes Evolved is a free-to-play MOBA developed and published by R2Games. It is an online battle arena similar to games such as DOTA2 and League of Legends.

In Heroes Evolved, two teams of up to 5 players each control one hero unit and battle each other in a symmetric map. Non-controllable mob units, called creeps, are generated for both sides twice every minute. These creeps automatically move to attack the enemy base. The goal for both teams is to destroy the opposing team’s home base. To do that, you must preserve your sides’ creeps while killing the enemy creeps.

Heroes Evolved has over 55 heroes you can choose from. Note, though, that most of them aren’t available at the start. You must purchase them via gold, points, or gems (more on those later). There are also some heroes that are available for VIP subscribers only. Each hero also has multiple skins available for them. These additional skins are also locked by default, requiring you to purchase them.

The game has both a PvP mode where you fight with and against players and a PvE mode where you fight against bots. But make no mistake, the PvE mode is only an afterthought and is only useful for practice and testing your strategies. Like most MOBA, Heroes Evolved is a PvP centric game. Matchmaking is random; you cannot pick your enemies. Instead, you are matched against other players within the same ranking bracket as you to ensure a fair fight.

Heroes Evolved only has two maps available to fight with. The first is the standard map with three lanes that’s familiar to every MOBA player. The second is a map with only a single straight lane surrounded by a lake connecting both sides. This map is extremely straightforward with no obstacles or jungles to hide in. It’s more of a laid back “fun” map since the strategies are limited by its straightforward design. 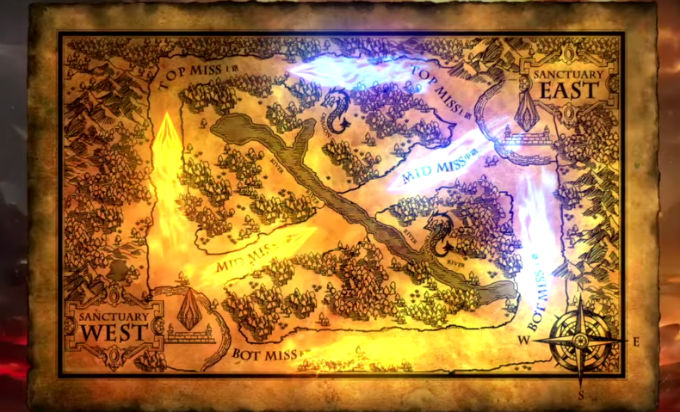 Heroes Evolved is a pretty solid MOBA when it comes to gameplay. They don’t do anything new, but playing with a new set of heroes can be an enjoyable experience. Those tired of League of Legends or DOTA2 might find this worth trying out for a bit because it is fairly well polished.

This is a MOBA with pretty low system requirements. You can run this game on any PC, even those with only integrated graphics, without problems. For example, this game will run on low-cost netbooks with Intel Atom processors. I didn’t have any problems with the game running smoothly during this review.

But the best thing about this game is that it actually has a proper MOBA gameplay. Everything you expected for an MOBA is in this game: a large amount of heroes, items, neutral creeps, towers, healing fountains, etc. The devs copied DOTA2’s gameplay outright down to the stats and the item shop system. As a result, Heroes Evolved’s gameplay is pretty solid.

Unfortunately, the game feels pretty sleazy. For example, if there are no matching players in other MOBA games, they would make you wait in a queue. Here in Heroes Evolved, the game matches you to a bot if it couldn’t find a matching player for you. Hopefully this is something that changes as the game evolves. Waiting can be frustrating, but I’d rather wait than wait AND be paired up with a bot.

The visuals are very similar to League of Legends. This isn’t a huge flaw as the art design for League of Legends is strong. It’s just something that comes off as more of a cheap imitation. I like to review games that really try to think for themselves.

They pretty much just copied the gameplay from DOTA2 and took the graphics from LoL. They probably did this to prevent accusation of direct copyright infringement from either party. Whether it will work or not is another story.

But the game’s main flaw is the VIP subscription system. There is a VIP subscription with multiple tiers that gives you a lot of perks along with access to VIP heroes. Paying for heroes with real money to get them faster like League of Legends makes sense. Not even being able to get them without becoming a VIP subscriber left a really bad taste in my mouth.

Heroes Evolved is an MOBA game with a small client size and with solid gameplay that’s faithful to the MOBA genre. Unfortunately, the game is plagued with sleazy practices like paid only content and bots masquerading as real players. Not to mention it’s pretty much a direct copy of DOTA2’s gameplay with LoL’s graphics.