tl;dr – Life is Feudal is a medieval sandbox MMO that focuses on crafting and realism.
PLAY LIFE IS FEUDAL NOW

Life is Feudal is a medieval sandbox survival MMO developed and published by Bitbox Ltd. Originally a multiplayer sandbox game, the MMO version was released on December 14, 2016. It runs on the buy once to play forever price model.

I needed to review Life is Feudal from a slightly different perspective than other MMO games because it doesn’t fall in line with typical expectations. There are no grand quests to finish; there is no raid boss to kill. Nor does it have any monsters or even magic. Instead, you have a vast wilderness teeming with wild animals to contend with.

This game is a sandbox MMO with survival elements, and the gameplay revolves around crafting. Life is Feudal strives to be realistic. You start the game practically naked and devoid of tools, but unlike Minecraft, you can’t just punch the trees to get wood. You have to fashion an ax by finding a rock on the ground that works as a suitable flint, snapping branches off a tree to make a handle, and finding wild plant fiber to tie it together.

Life is Feudal is mainly controlled via the keyboard and mouse. The WASD keys are used to move the character around the map, Space is used to jump while pressing C allows you to switch between 1st and 3rd person view. The mouse is used to interact with objects on the map. The Tab key switches the mouse into free look mode.

The game has three playable characters: the Auriunian, the Khalisian, and the Jorgithian. The differences between the three are just cosmetic. The Auriunian is based on Western European aesthetics, the Jorgrithian on Slavic, and the Khalisian on Ottoman. Character customization is a bit limited; you can only change your face, hair cut, hair color and skin tone.

Life is Feudal features realistic combat. You have to swing your weapon physically, and the damage dealt is calculated using real physics. You can also get winded from swinging weapons and running around too much. Unlike most MMOs, you do not have a lot of HP in this game. Even a fully armored knight can be taken down in as few as ten blows.

Crafting is a major part of this game. There are over 25 crafting skills available; each centered on one expertise. Pretty much everything in this game is craftable, including the buildings. Crafting in this game is recipe based. Each item has a fixed recipe and crafting can be started by right-clicking on the relevant tool. For example, you can craft arrows by right-clicking on the knife, selecting bow craft and selecting the arrow you want to craft.

Life is Feudal has a decent mix of both PvE and PvP content. If you want you can live a slow life alone in the wilderness, building your own hut, farming and hunting for food, and making your own clothes. On the other hand, you can also team up with other players building you own settlement or try to conquer other settlements. The choice is up to you. 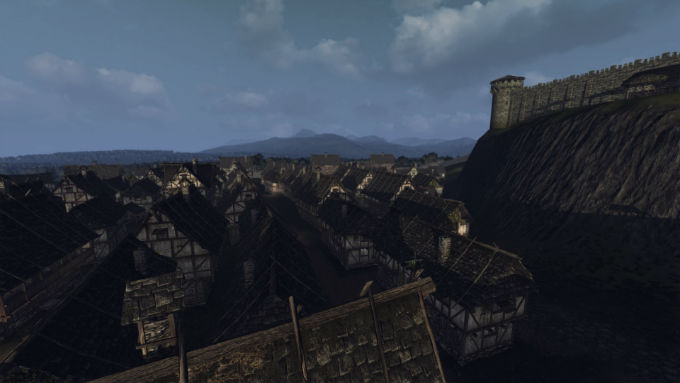 One of the best things about this game is the size of the game world. It’s massive, at around 441 square kilometers in size. It’s also persistent, you can build a hut in the middle of nowhere, and other people can stumble upon it. Everything in this game is 1:1 in scale, and it will take you weeks to walk from one side of the map to another.

The crafting system is complex and extensive. Everything in this game: your weapons, your houses, your clothes, everything is crafted by the player. And you do it by starting from the raw ingredients. To build a sword, first you have to prospect the ground for ores, then you have to mine, smelt, then finally forge the sword. Each of those steps is quite complicated. For example, during the smelting process, you have to make sure that the temperature of the furnace is 1,500 degrees or above.

You also need a furnace itself and a few charcoals as fuel, which you have to craft from raw materials yourself. There are no NPCs selling you stuff in this game. The economy is entirely player driven. If you need something, you’re going to have to build it yourself or ask other people for help. As a result, it’s pretty much a necessity to band together with other people to make a settlement.

But building a settlement isn’t easy. You need a lot of materials to construct the buildings, furniture, and tools for your settlement. Unfortunately, it is much simpler and less tedious just to raid other settlements for their materials than actually to gather it yourself. Naturally, your settlements will be prone to PvP raids by other players.

PvP in this game is a much more involved affair and tends to be large scale. No one wants their hard work to go to waste. No one wants the settlement they painstakingly built piece-by-piece down to the last plank destroyed. Compared to most MMOs, the stakes are much higher. As a result, PvP tends involve 50+ players fighting each other.

The game is also extremely slow-paced. It will take you a couple of weeks in real life to build a small hut. The majority of the time is spent gathering the materials and processing it. If you’re in a group, you can divide tasks and finish it faster. But, even with that, it will still take you a couple of days to build a basic structure. Life is Feudal is no Minecraft, building up your settlement is a multi-month affair in this game.

Unfortunately, this also means solo players are pretty much screwed. Buildings require a lot of processed materials to build. If you’re solo, you’re going to get stuck performing the same repetitive gathering tasks over and over again. Sure you might be able to build a small hut for yourself, but you won’t be able to make a settlement in a reasonable amount of time.

Life is Feudal is generally not a game we would review. It only plays up to 64 players on a server. However, work on a Life is Feudal MMO has spurred us to include this game. Beware that they are two entirely different products. If you want massively scaled experience, we recommend waiting. However, playing non-MMO Life is Feudal will prepare you for when the true MMO launches.

The game is good, with a massive persistent world, complete with a player driven economy and extensive crafting system, along with large scale PvP. Unfortunately, it also suffers from tedious skill grinds, and the slow-paced gameplay is not for everyone.

I recommend this game, but only if you don’t play solo. You have to find a group of people and build a settlement together. That’s where the enjoyment of the game comes from. Otherwise, you will get overwhelmed by the extreme grind just from gathering materials.