tl;dr – Brings the physical card game to life with a refined, easy to pick up digital system.
PLAY MAGIC: THE GATHERING ARENA NOW

For those who already know Magic: The Gathering, and for all those who’re looking for a new game to try out, here’s the deal, Wizards of the Coast have finally launched Magic: The Gathering Arena; a free-to-play digital collectible card game! The digital re-birth of the original is not only the best thing to happen to all the game lovers but is also a great way for the gaming publishers to expand the game for everyone to access it.

In the original Magic game, players pretend to be wizards who call creatures and cast spells at each other. While this was played by purchasing cards and has been played for more than 2 decades, the digital version of the same game has made fans and digital gamers alike very glad.

To start off, comparing Magic The Gathering: Arena with the original, the MTGA is easier to play. While the original was complex and took a lot of time to learn and understand the intricacies of the game, the digital version takes care of the complexity very well. There are hardly any changes in the elements that make Magic the Gathering a unique card game. What the digital version does is take the mental load off the players of understanding the game and makes the experience fun filled, and smooth.

From pretending to be wizards, to summoning creatures and playing “ladder” matches, the Magic The Gathering Arena is a great free-to-pay card game. You can participate in daily quests, grow your collection, se the collection to play the game further and win card packs too. Along with this, the smooth flow and deep visuals creates a more exciting and titillating atmosphere for the player.

The digitalized version of the card has the constructed as well as draft play and also gives new players a plethora of base cards and already made decks to help them. Completing quests and winning matches rewards the player with booster packs to help them add cards to their library. 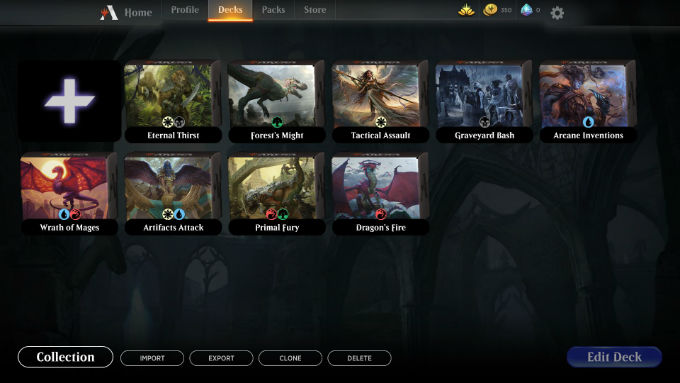 As mentioned before, the digital version is easier to play and reaches out to a more expansive and global audience. MTGA seems to be mindful of the slight glitch with the original game and tackles it in the best way possible. Now that the game is available for all to play, as soon as you make an account to play the game, you will be taken through a very thorough video tutorial of how the game is supposed to be played. It takes the player through the flow and order of playing in a very detailed way. This makes understanding the game for a newbie a lot easier. It is necessary to mention the clarity of the tutorial as well since it helps you know what the game is and how to play it well. With this, the publishers of the game have also released a thorough Beginner’s Guide to Magic The Gathering Arena on their sub-Reddit where the text explains what the game is, which version of the game will suit your interest etc, Kudos to this extra help.

Apart from the tutorial and the guide, the digital version of the game adds to the player’s overall experience as the various stories, visuals, and flow of the game keeps the player engaged. For those who love to watch the game unfold and learn the ropes of it, Magic The Gathering on Twitch and other platforms adds to the excitement with the draft nights and ladder matches.

While the initial tutorial in Magic The Gathering Arena explains the ropes of the game and gives an introduction to the game, it doesn’t do much for beginners who want to know how to build a deck or explanations on why a player should have a certain number of creatures and or spells at their disposal. Additional information in the form of clue or help boxes in the game or additional links in the game app can really help new players better their game.

If this is left out, the game will only end up losing the amount of people who play it since no one likes losing out so much. Without more guidance and help, players other than those who have been playing the original for a very long time will be down in the dumps and won’t want to move ahead with playing.