Neverwinter is a very unique MMORPG that was designed based on the Dungeon and Dragon universe. Like the renowned board game, this MMORPG features an incredible amount of customizations. In fact, once you have the game installed and booted up, you’ll be given choices after choices to select from during character creation.

For instance, for race, you are spoiled for choice as you have a stunning 12 different races to choose from, including the reptilian-like Dragonborn, the demonic Tiefling and a huge range of elven races, such as the wood elves, moon elves and sun elves. Granted that some races are premium only, there are quite a lot available for the free-to-play player. Each race has their respective racial traits that add to the character’s starting stats and some are more immune to certain types of damage, for example, dwarfs are more resilient to knockdowns and stuns.

Once you’ve chosen race, you’ll then need to select a class. There are up to 8 classes available in Neverwinter. Depending on how you enjoy playing MMOs, you would want to choose a class that caters to your play style. Classes also have their respective primary ability and 2 secondary abilities (stats), and can even be specialized into 3 different feats later on. Appearance-wise, there are many presets available that you can further customize. There is even a character background part where you get to craft a story for your character.

Being the bread and butter of every MMO, the combat system is very nicely designed in Neverwinter. It is an action-based MMO where you’ll need to make every action you do count. There is even positional damage in which frontal damage can be blocked and attacking from the back will increase your chances of getting a critical strike.

Interestingly, with every hit you make, you’ll gain action points which will contribute to the charging up of your special, and very strong, power. Once the meter is filled, you can unleash devastation on your enemies. Combat in this game is also supplemented by the addition of a companion which you can later obtain at level 16. Companions have their own set of classes and powers, and they can be leveled up alongside you. You can even equip them with items. 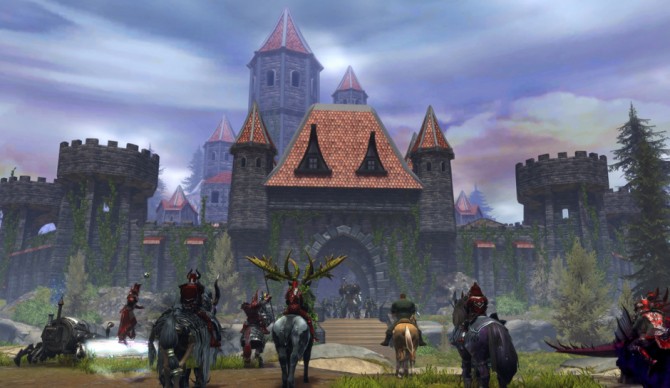 In terms of questing and PvE, Neverwinter features a range of group dungeons as well as quest-based mini-dungeons that you can choose to complete solo or in a group. Dungeons in this game are unique in the sense that they are almost always riddled with traps, so by being watchful of your surroundings, you can avoid getting any unnecessary damage. For PvP, there are mainly 3 types of modes – the 5-vs-5 Domination; the 10-vs-10 Gauntigrym and the 20-vs-20 Strongholds. However, many players avoid PvP due to the game’s non-existing match-making system.

Besides PvE and PvP, you’ll also be able to level up your professions in Neverwinter as well. They include artificing, alchemy, tailoring, jewelcrafting and also the more unusual, leadership. Interestingly, unlike other MMOs where your character actually learns the skills associated to these professions, you’ll hire the craftsmen you need to help you get an item crafted. Crafting naturally takes time and you can queue up jobs while you wait for the processes to complete. Resources are also needed for crafting and for those, you’ll have to manually collect them yourself.

The most interesting aspect of Neverwinter is the foundry where you can build your own playable dungeon from scratch and design your own quest chain! There are some restrictions in place to prevent players from exploiting this content creation feature, but if you dutifully keep to the criteria, your dungeon or quests should be available for others to enjoy pretty quickly. By doing other players’ quests or dungeons, you can gain bonus experience points that will help you level up a bit more easily too since you won’t be running all over the place.

To sum it all up, Neverwinter is an incredible MMORPG that stands out from the usual MMO fanfare, such as its unique foundry and a craftsmen-hiring profession systems. Admittedly, there had been some problems regarding to its latest patch, but Neverwinter is, without a doubt, a solid MMO that offers hours of entertainment. So, do check out this game today and experience it for yourself!