tl;dr – Path of Exile is an excellent successor to Diablo 2 and in many ways, trumps the classic action RPG.
PLAY PATH OF EXILE NOW

Path of Exile is an online hack and slash RPG developed and published by Grinding Gear Games. It was released on October 23, 2013, and is available on Steam. Like Diablo, it incorporates many MMO elements but with a focus on small group dynamics.

Path of Exile is an action RPG that is heavily inspired by Diablo 2. You play the game from an overhead perspective, using the mouse to move your characters and attack enemies. By killing enemies, you gain EXP points which allow you to level up. Unlike most other MMORPGs, Path of Exile only has three attributes: Strength, Dexterity, and Intelligence. The core mechanics generally revolve around these three attributes.

The skill tree in this game is expansive and is displayed as a large encompassing web composed of over 1,700 skills. One of the coolest aspects of Path of Exile compared to other top MMOs is that all the classes in this game learn from this same skill web. They just have a different starting point each. Skills in the Skill web are bunched together by their attributes; strength based skills are in one section while dexterity based skills are in another. This means that while the Marauder starts at the strength section of the skill web, players can snake their way into the dexterity part. This is, however, not a good idea as you only have 123 skill points to spend at max level.

The skills you can learn from the skill web are all passive skills. Active skills in this game are not learned. Instead, they are socketed into your equipment. Equipment in this game has one or more colored sockets, with each color representing a base attribute: green for dexterity, red for strength and blue for intelligence. Each skill gem belongs to one of these attributes. And you can only place a skill gem in the same color as the socket. Skill gems level-up on use.

Another thing unique about Path of Exile is the use of support gems to modify the skills’ effects. On some equipment, there are linked sockets which allow you to link a support gem to a skill gem. For example, you can link the fireball skill gem with the chain support gem to make your fireball ricochet off your enemies, or you can link it to a greater multiple projectile support gem so that your fireball skill fires five fireballs instead of one. Or, if you manage to find a piece of equipment with two linked slots, you can do both so that you have five fireballs all ricocheting on your enemies every time you cast the skill.

Path of Exile is pretty much a PvE hack and slash MMO. In combat zones, you can group with six people total. In town though you can see a lot more people, but this is still instanced. Pretty much every map in this game is instanced. As a result, the game is great for small group play isn’t a true open world MMORPG. PvP is technically present in this game. You can duel other players and enter a dedicated PvP zone, but it is an afterthought. The game isn’t balanced towards PvP. 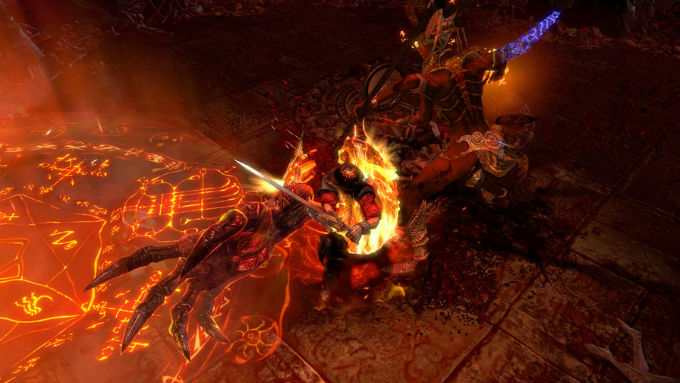 Path of Exile does almost everything right. For one, it’s not pay-to-win. The developers of this game follow an ethical microtransactions model. The cash shop doesn’t sell anything that would give you an in-game advantage. In fact, aside from items that increase your character or item slot, items in the cash shop are all cosmetic. There’s no EXP boosts, no premium equipment, no nothing. It’s actually really refreshing. The game is extremely healthy and seeing that such a fair system works is very inspiring.

The customization aspect of this game is top notch. By intelligently linking a skill gem with a support gem, even the lowest of skills can be turned into a powerful one, like the fireball example above. The amount of freedom you have with the item socket mechanic is pretty much endless. And you will spend most of the time tinkering with the items. Theorycrafters will be in heaven in Path of Exile coming up with the best combination for their charater.

The skill web system is also great. While some of the slots are just +10(str/dex/int), many slots offer more than that. For example, some slots give you increased regeneration, some add life drain, another reflects damage. Pretty much every type of passive ability you can think of exists in the skill web; you just have to find it.

The game also has a unique currency system. Path of Exile has no gold or money. Instead, you barter for items with the merchants or other players. There are 22 so-called “currency items” which you can use to trade. Each of the currency items has a consumable effect, which makes them useful by itself. As an example, a currency item called the orb of alchemy allows you to upgrade a normal item to a rare item on use. Another currency item, the jeweler’s orb, changes the number of sockets an item has on use. As a result, the economy of this game is healthy. It doesn’t suffer from hyperinflation common on most MMOs. It’s also a lot more sociable.

With great power comes great responsibility, and this game is a perfect example of that. Path of Exile gives you a lot of power in regards on how to build your character. A side effect of this is that it’s extremely easy to screw up your character build. The skill web is confusing, and it’s hard to find out the skills you want. And even if you find it, you’ll have to plan how to reach it, since you can only learn skills connected to already learned skills. You have to plan your skill build in advance, or you’ll find yourself horribly outmatched in the later parts of the game. Luckily, skill resets do exist (unlike the classic action RPG, Diablo 2)

If you have to plan ahead for your passive skills, you have to do the exact opposite for your active skills. It’s nearly impossible to plan your active skill. First, skill and support gems are random loot drops. Trying to farm for a specific one is pretty much a lottery. Even after you have the desired gems, you then have to find items with the right amount of sockets, their colors, and links. This too is random, and while you can re-roll it by using a currency item getting the desired combination is a crapshoot. As a result, you can’t plan your active skill.

Like most hack and slash RPGs, Path of Exile can be a bit repetitive. Whether you’re low level or high level, you’ll be doing the same thing: clicking the mouse button on an enemy and watching your character bash the enemy to death. Of course, your mileage may vary. Path of Exile is certainly no less repetitive than other games of the genre.

Path of Exile is an excellent game that manages to follow in Diablo 2’s footstep. There’s such a large amount of customization available. This is a hack and slash MMO that is not pay-to-win, which is a rarity in the industry. Finally, the currency system is ingenious. It prevents hoarding and hyperinflation that plagues most F2P MMOs. Some may find the game repetitive, but it’s no more so than comparable titles.

In the end, I strongly recommend this game, especially if you like Diablo 2 or Torchlight. You might find it frustrating looking for certain gems to drop, but those who can go with the flow will enjoy themselves immensely. The first three acts of the game is a fun experience, particularly in the beginning when you’re still learning the potential of all of the different skill combinations.