Pirates: Tides of Fortune is a browser MMO developed and published by Plarium Games. It was first released on February 12, 2012.

Pirates: Tides of Fortune is a base building/resource management MMO. In this game you play as a captain of a pirate group, managing your secret island, your haven, while raiding and pillaging other players’ territory for loot. The game is played from a 2D isometric perspective and is completely controlled via the mouse.

Like most strategy MMOs we’ve reviewed, much of Pirates: Tides of Fortune is focused on base building. Each player is in charge of an island, called a haven in the game. In this haven, the player builds and upgrades various beneficial structures such as gold mines to gather gold and observatories to research discoveries. This part is no different from other base building strategy MMOs on the market.

Pirates: Tides of Fortune has three primary resources: lumber, gold, and rum. In general, lumber is used to construct buildings. Rum is used to recruit troops and mercenaries, while gold is used for both. Also, there are secondary resources such as pearls which are used to upgrade your units and sketches to research discoveries.

Of course, a pirate game would be pretty bad without raiding and pillaging involved, and this game does not disappoint. Combat in this game is composed of raiding and ransacking other players. In general, there are two types of attacks: a raid, which steals resources from an enemy, and a blockade, which is sort of a long term raid. While the blockade is in effect, the blockading player absorbs a certain percentage of the resource income from the blockaded player. It doesn’t quite fit the actual definition of a blockade, but I’ve reviewed worse naming conundrums.

You can break a successful blockade by producing enough units or by asking for reinforcements from other players. Units in this game come in one of two types: offensive and defensive. Like the name says, offensive units are good at attacking, while defensive units are good at defense. Managing a delicate balance between these two types of units is the key to being a good player in this game.

This game has a guild system called a brotherhood. Joining a brotherhood not only allows you to ask and receive help from other players in your brotherhood, it also gives you access to brotherhood only daily quests. And it also allows multiple members of the same brotherhood to coordinate a massed attack against one target. 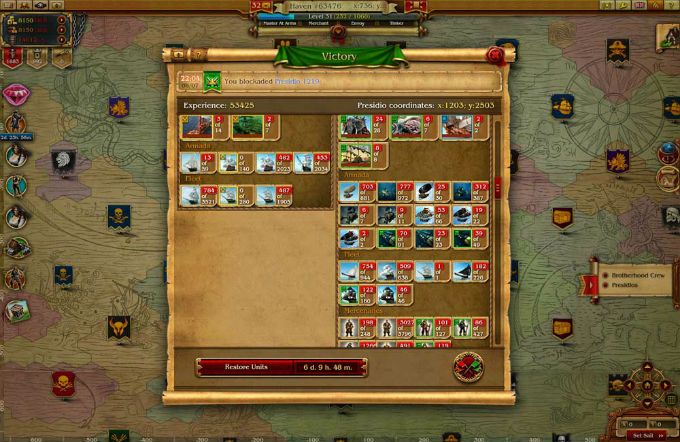 Pirates: Tides of Fortune has an immersive pirate themed art style. Every building, every unit fits perfectly with the game’s pirate theme. Even the text in the game is in pirate speak. I’ll admit that the pirate speech was a bit hard to understand at first, but it does add to the immersion. It combines pirates, swashbucklers, and buccaneers all in one immersive landscape (for a browser MMO).

The game also has a surprisingly nice soundtrack that fits with the setting. The soundtrack in this game is filled with sea worthy and pirate themed music to drive you to explore and conquer the high seas. To be honest, I like the soundtrack more than I like the game itself.

Moving on, the Pirates: Tides of Fortune is also pretty easy to get into. You don’t need to download a game client. The game is played from the browser. There’s also an extensive 51 task beginner quest line in-game that guides you bit by bit.

Unfortunately, the game has no unique mechanics that would differentiate it from the rest. The game plays like every other browser strategy MMOs out there. Since this is supposed to be a pirate game, you’d think that the gameplay will be based around building and equipping ships and capturing many merchant galleons, right? But no, you raid other pirate’s base with soldiers and mercenaries instead.

Yes, this game is unfortunately just a reskin of other strategy games. The gameplay just doesn’t match the visuals, or audio, or general immersive feel of the game. Or rather, I think the devs are too afraid to change the gameplay for fear of ruining the winning formula.

And by winning formula, I mean the revenue generating aspects of the game. As you might expect for a strategy MMO, the game is on the pay-to-win side. You can pretty much do everything as long as you have money. Want your dead units back? Check. Want some powerful, unique units? Check. Want to be impervious to other players’ attack? Check. It’s nearly impossible to win as a non-paying player.

Pirates: Tides of Fortune is a polarizing game. On the one hand, it has a pretty great soundtrack along with a beautiful pirate themed art style that fits the game setting. On the other hand, the game was a direct lift from other base building MMOs with no unique mechanics whatsoever. In effect Pirates: Tides of Fortune feels like a reskinned clone of games I’ve reviewed half a dozen times.

If you’re looking for a pirate themed game with a tried and true formula then Pirates: Tides of Fortune might be your answer. If you want a new and refreshing change from other browser based strategy games, you may want to look elsewhere.