Rail Nation is a free to play browser based train management sim MMO developed and published by Travian Games. It was first released on January 13, 2013. It’s also available for the Android and iOS.

MMOs come in all shapes and sizes, from traditional RPG types that are a dime a dozen to equally common strategy/simulation war games like Clash of Clans. In this review we look at Rail Nation, a train transport management sim MMO. Rail Nation is a game where you manage a transport company, buying train engines/railcars, and assigning them on a route that will hopefully net you a profit.

You start the game by picking a city in continental US that will be your home base. Each city belongs to one of the two competing sides in the game: Pacific Railroad and Atlantic Railroad. The differences between the two sides are mostly superficial and don’t affect the gameplay. After selecting a side you can then customize your character. Because this game is a train simulation, your character is not really important. It’s merely your avatar.

The game is played from a top down view. From here you assign schedules to your trains, buy connecting tracks between locations, inspect the cities for demand, among other things. In Rail Nation you do not manually lay down tracks on the map. Instead, there are preset routes already placed in-between the various locations that you can buy.

Once you’ve bought a route you can then assign a train engine and railcars to it. Train engines do not run forever, they have durability points which wear down. You have to repair them manually from time to time. Let it down to zero and you will lose your train. There are multiple train engines available for purchase, each with their own unique specs. At the start of the game you don’t have access to most of them and will have to research them first.

Research is an important part in Rail Nation. The game is divided into six eras starting from the earliest steam locomotives and ending with maglevs and electric trains in the last era. Unlike most sims, era advancement is automatic. Each era in the game lasts for 14 days. Once the time is up, the game automatically moves to the next era. At the end of the last era the game resets back to the first era.

Each era has a different tech tree from which you can research new technologies and trains. To research them you need research points which are automatically generated by your laboratory. You then assign these points to the technologies you want to research. The technologies you’ve researched do not automatically upgrade your trains. You have to upgrade the trains manually and each upgrade costs a certain amount of money to perform.

On your home city, you have the home base from which you can build various structures to help your company. For example, you can build and upgrade your laboratory to increase your research points. You can also build and upgrade structures that generate money like shopping centers and hotels. But the main purpose of the home base is to upgrade your track production and engine yard structures so you can create and build new routes and engines. 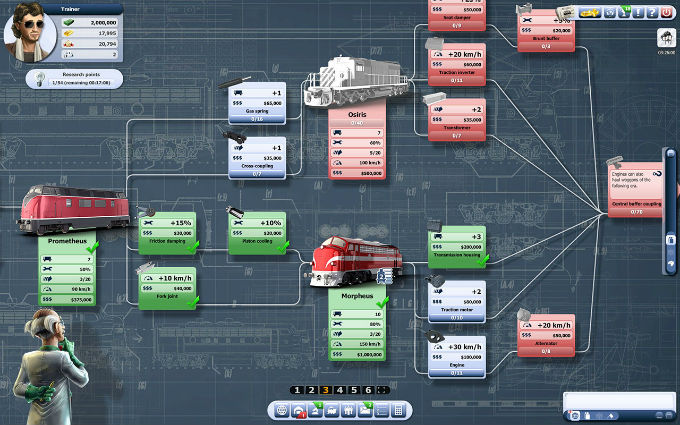 Rail Nation is an extremely polished game. Most of the gameplay mechanics are streamlined and the important financial data are displayed in an orderly manner that’s easy to grasp and understand. The UI is intuitive and easy to use. But if you’re still confused the tutorial is extremely helpful as it shows you how to play the game clearly.

The game is also historically accurate. The technologies you research are all based on actual train technologies from that era. The engines too are based on actual train engines, albeit named differently. The goods you can transport are also accurate for that era. For example, during the early eras you can only transport raw resources like coal and wood. On later eras you can build passenger and mail cars. As a result the game is pretty immersive, especially if you are a train sim lover.

The core gameplay itself is pretty fun, though mostly a hands off approach. After you’ve assigned a route to a train you just let it go, until you’ve found a new route that’s more profitable. This makes the game stress free. You don’t need to micromanage on as regular a basis as some other strategy games online. I really enjoy that eras progressed automatically. You never feel like you fall too far behind which helps with the game’s casual feel. All in all, Rail Nation succeeds in delivering an MMO experience for train sim enthusiasts.

As great as this game is there are still a few flaws. For one is the performance. This game is pretty unstable and is a massive memory hog. It takes gigabytes of RAM and doesn’t release them when necessary. As a result, if you let the game run for 1 hour and beyond you will run out RAM and swap space, making your browser crash in the process.

The game is also horribly optimized. The graphic animations are in slow motion and there’s a delay while panning across the screen. If you have a beefy videocard you probably wouldn’t encounter this problem but this game is a 2D flash game – it shouldn’t require a beefy videocard to play in the first place.

As for the gameplay, I personally found it too streamlined. After you’ve set the routes there’s not much left. You just have to check from time to time to repair your engine and you’re set. There’s no surprises like an enemy player’s raid to watch out for to break up the gameplay.

So in the end, is Rail Nation good? I think so. The game is extremely polished and cons aren’t really much of a problem in the end. After all, Rail Nation isn’t built to play hours at a time. You just need to check it for five minutes or so, making the memory issues moot. Same with the slow speed, the game doesn’t require fast reflexes so the slow speed isn’t a problem.

In the end, I recommend this game to anyone that’s looking for a casual train management game with some depth that’s able to be played online from a browser. But if you’re the type that likes to micromanage every aspect of the game, a different browser MMO might make for a better fit.