tl;dr – Record of Lodoss Online is a 2D isometric MMO based on the anime of the same name.
PLAY RECORD OF LODOSS WAR ONLINE NOW

Record of Lodoss War Online is a classic 2D MMORPG. The game is viewed from a top-down isometric perspective. The controls are classic ARPG style. You use the mouse to attack and move your character around the map while you use the hotkeys on the keyboard to cast skills and open the various menus available.

This game has zero customizations available. At the start of the game, you select from one of the five classes: the Esquire, the Oracle, the Magic User, the Rogue and the Shaman. Not only are they gender locked, but their appearance is actually fixed. You can’t even change the hairstyles.

Each class does come with two advancement paths and offers a fairly broad skill system. In this game, skill points are separate from your level. Instead, you get a skill point every time you complete charging the skill exp bar. To learn a skill, you need to buy it from the skill merchant corresponding to your class. Each skill requires a certain amount of skill points and gold. Skills are divided into three types, active skills which you can cast anytime, passive skills which are always active, and reaction skills which automatically activate once certain conditions are met.

Record of Lodoss War is mostly a PvE game. The content primarily consists of random quests and dungeon expeditions. The game does have guilds and PvP content, but they are a minor part of the game. 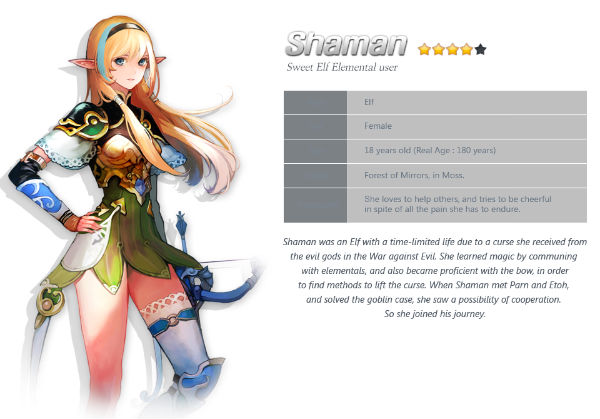 One of the biggest draws of this game is that it’s based on a classic anime franchise. Record of Lodoss War is one of the classic fantasy animes around and is a recommended watch for anyone. Naturally, a game based on this anime will attract a lot of attention from fans. In fact, I’m sure that some people reading this Record of Lodoss War Online review are here because they saw the name and stopped to say “What??” A lot of anime MMOs are actually unlicensed, but this what appears to be legitimate.

Thankfully, the game does have some substance. Record of Lodoss War Online provides some pretty good old-school gameplay. The game is a classic ARPG through and through. The skill system is also surprisingly open-ended, which gives you a lot of flexibility for character builds.

Another good thing about Record of the Lodoss War Online is the colorful and crisp environment art. While the character sprites look dated, the background does not. Outdoors tend to shimmer with a light pastel color scheme while indoors cast a dark and foreboding shadow. The environments look good and add to its fantasy anime feel.

Then there’s this section of the reviews. The first obvious bad of Record of the Lodoss War Online is the lack of character customization. Character appearance is fixed so everyone just looks like a clone of one another. There are some costumes to change up appearance, but not enough to really add any individualistic sense to the game.

Record of Lodoss War Online is also poorly translated. Most of the NPCs talk gibberish giving you a hard time figuring out what they want. Even worse is that the standard in-game terms get translated differently for no reason. The translation has zero consistency. Some skills even have multiple conflicting names. I guess it’s kind of funny at first, but after a while I found it annoying.

The game also requires a lot of heavy grinding. At first, it doesn’t look that way. You can quickly level up to 20 without any problem. Then at level 21 onwards, the EXP curve rises dramatically. EXP requirements practically double every new level. Even though the level cap is 40 it takes months of grinding reach that.

Finally, Record of Lodoss War Onlien suffers from massive connectivity issues. There are certain times where you can’t connect at all. And even if you managed to connect to the server, you’ll encounter lag more often than not. I believe all of the servers are hosted in Korea so expect latency issues if you live in America and even Europe.

Record of Lodoss War Online is an old school MMO that features a crisp and colorful environment based on a classic anime of the same name. Working against it, the game also suffers from a bad localization and tons of grinding after a certain point. In the end, it’s tough to close out this review by recommending Record of the Lodoss War Online.