Revelation Online is an MMO made by taking as many popular game mechanics as possible and mixing it together into one game. Unlike most other MMOs, Revelation Online has three control styles which you can switch freely. First, you have the standard tab-target control use in most modern MMOs. Then, we have the old school point-and-click controls. Lastly, we have the free-form aiming similar to most FPS and twitch-based MMOs.

Character customization is complex and vast. You can change almost every aspect of your characters’ appearance. To put this in perspective, there are three sliders dedicated to your character’s chest size alone. The game has six classes, each with their unique playstyles. These include the Gunslinger, the Blademaster, the Spiritshaper, the Vanguard, the Swordmage, and the Occultist. In addition to this, Revelation Online has four social jobs which you can pick once you’ve reached level 20.

Revelation Online excels at both PvE and PvP. Dungeons in this game are instanced-based and typically require a 5-man party to clear. Thankfully, there’s a built-in party finder system to help you find parties to join. Dungeons are divided into various difficulties ranging for easy to very hard. The game’s quest system is also pretty extensive, with a lot of daily and weekly quests for you to pick. Most of the quests are only available at a particular time or day, making daily questing not so tedious since you get a different daily quest depending on the time or day. The developers for Revelation Online have definitely learned from the games preceding it.

On the PvP side, you have the standard castle siege and open-world PVP along with other less conventional modes. For one, there is a competitive arena system where you fight one-on-one against other players from all the game servers. The players that rank well take home various rewards at the end of the season. The game also features aerial combat and various PVP modes like capture the flag or MOBA. There’s really a type of PvP for everyone, which might be hard to maintain in the long run. 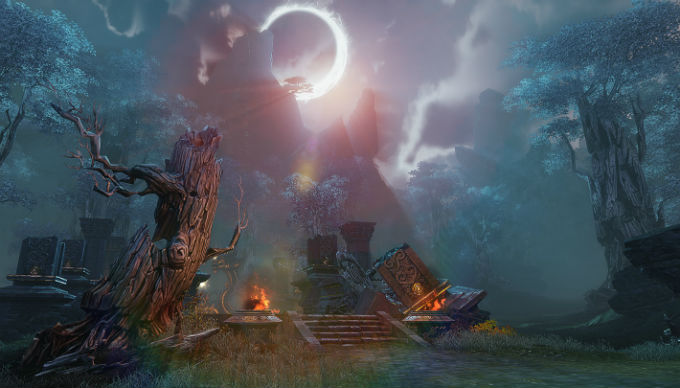 Revelation Online boasts extensive character customization. You change anything from your hairstyle, height, weight, skin color, and pretty much anything else you can consider. The game also has a lot of vanity costumes you can wear. The multiple combat styles all work and while it doesn’t feel like a revolutionary change to combat, it’s well thought out. The skills aren’t mind blowing but it’s as good as any standard MMORPG out there.

Quests, like I said above, are also numerous. There’s a lot of variation (not just tons of kill ten rats objectives). This keeps questing fresh which is typically a big issue for free to play MMOs. In addition to that, the game features an auto-walk feature where your character will automatically walk to the NPC you need to talk to in order to advance the quest. It takes a lot of the tediousness out of MMO questing.

The game is also pretty forgiving to newcomers and tries to integrate them into the community. For example, a daily quest for high-level characters tasks them with escorting and guiding low leveled characters inside a dungeon. Thanks to this, the old crowd is actually friendly towards newcomers. Skill points are also freely resettable so there is no way to ruin your character build.

But Revelation Online’s best feature is its in-game flight system. Unlike most other MMOs that feature flight, Revelation Online utilizes truly unlimited flight. On the Overworld map, you can fly from wherever you are to anywhere you want to go. There’s no flight time-limit or any other restrictions. The Overworld map is also seamless and completely open world; you can fly from one edge to another without encountering a single loading screen.

I was disappointed in reviewing Revelation Online to see the lack of a consistent theme. You have standard fantasy things like wings, along with steampunk mechs and flying elephant mounts. It’s hard to get really invested in the world due to this. Some games try to do too much. While it generally works for Revelation Online, theme and immersion is one area where they drop the ball.

Gold in Revelation Online comes in two types: bounded and unbounded. Bounded gold is common drop from mobs, but their use is limited. Unbounded gold is pretty much the real currency. You can use it to trade with other players, buy items, etc. Unfortunately, unbounded gold is also hard to obtain. Mobs rarely drop them, and even if they do, the amount they drop is paltry. The best way to acquire unbounded gold is from limited daily quests, unless you paid for a VIP account. While Revelation Online isn’t full blown pay to win, free players will find it very difficult to keep up. A subscription will offset this so expect to pay at least something to keep up.

Revelation Online is an unexpectedly fun game with extensive character customization along with being friendly to newcomers. I’d rate it as one of the top MMO surprises of 2016. Sure, the theme is a bit off, but the game’s flight system is surprisingly freeing. The near-requirement of VIP won’t pose a huge issue for long term players. Treat Revelation Online as free to play with a lengthy trial and you won’t be disappointed in it as a free MMO. In the end, I heartily recommend this game.