Fry doesn’t know what to do, and very often I don’t either. Altitis is a very “real” illness that affects millions of MMO players worldwide. Urban Dictionary defines altitis as a “mental disease of making too many alternate characters.” The good news is that it is treatable. The bad news is that only the disease’s very creators have that power.

It’s easy to understand how altitis has become so common place in our world. New characters mean new classes mean new abilities mean new experiences mean…well, this could go on for a while. Altitis generally develops naturally, but some MMOs provide boons for splitting time between characters. Features like rest XP and limited respecs contribute to this international phenomenon.

Those who suffer from altitis report the inability to stay logged into a single character for more than two hours. The greatest victims are unable to ever reach max level. For them, there is no endgame. There is only new game. How will they ever see the glory of raiding when stuck on an endless loop of starter quests? Some developers even take advantage of the infected, limiting free character slots and selling them for a premium.

There are MMO developers who have decided to fight back though. They seek to attach players to the life of a single character. Final Fantasy XIV is one such bastion of hope in the field to cure humans of altitis. In an effort to curtail this epidemic, Square Enix’s MMORPG lets players level any class on a single character. Is this right? Or does it go against the natural order of MMOs? On a deeper level, we must ask: is altitis a blessing or a curse? Perhaps this disease is actually a strength hidden in plain sight.

There is a school of thought that increasing alternate character density will serve to enhance the quantity and quality of gameplay. The logic goes something like this – if playing through the game once is fun, playing through ten times is ten times the fun. And it’s not the same game because players are experiencing everything from a set of fresh eyes.

Even if exploring a world for the second or tenth time isn’t as fun as the first, it allows players to combine the homey feeling of an MMORPG with the discovery bug of a new game. In games with multiple factions like World of Warcraft or EverQuest, playing a new character really can feel like experiencing a new game. This leads to a train of thought that many consider but rarely actually discuss. 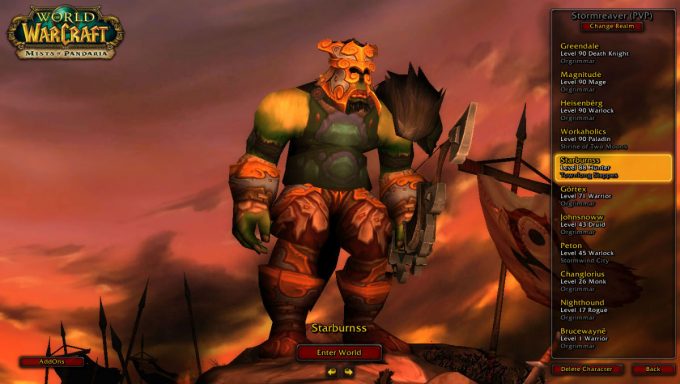 MMORPGs would be better if people focused more on the journey than the destination. There’s such a huge focus on leveling up and gaining more power in MMORPGs that actually playing the game can turn into a secondary activity. Are gamers really more interested in a high item level score than actual, sheer enjoyment? I’m sure some are, but deep down are you one of those people?

Altitis reinforces the idea that we’re here to experience the game here and now, not look at the results of our merits in a trophy case. I would be willing to bet most of your fondest MMO-related memories involve other players. A properly executed alt-heavy world would largely focus on the journey over destination by prioritizing socialization features. Because the leveling process is largely more dynamic than farming raids, it opens the doors to a wider array of people to meet. Perhaps this is something the upcoming Pantheon: Rise of the Fallen will truly embrace this rather old school concept.

Justin from Bio Break brings up multiple good points in discussing how World of Warcraft Legion broke his altitis that had so deeply ingrained itself during Warlords of Dreanor. And all of these points directly relate to the negatives of the mental disease. Time has been and will always be a major factor for fully experiencing MMORPGs. You can’t progress without at least some trace amount of it, and maintaining even a single alt can effectively put an end to meaningfully progressing a main character.

While leveling up new characters can be fun with all the new abilities and a fresh play style, poorly structured progression can devolve into a chore. Completing the same quests in the same order is not a fun activity for most people. Games with a smaller world or limited leveling options fit better in an alt free world.

While many like to complain about the present state of MMOs, the fact is we have plenty of good MMO offerings. It’s entirely plausible and more importantly, enjoyable, to call multiple virtual worlds home. We may not normally designate characters in these other universes as alts but perhaps we should. Progression is the core mechanic of MMOs and any time spent on a new character takes away time from the others. This is true whether or not that character is a part of the same game world.

Eschewing the benefits of why developers might support alts frees up time to work on content elsewhere – namely the endgame. I’ve said some negative things about it, but the fact is that progression is an MMORPG’s biggest draw. Ditching fifty quests to spice up alt-driven replay could be spent on new abilities for existing characters to toy with. Discouraging altitis means freeing up resources for more novel content, even if the quantity of content is higher with alt-driven gameplay.

No one can tell you how to deal with altitis. This is a very personal decision that one should discuss with friends, family, and an MMO professional. For those suffering, definitely don’t look at this list of MMO games. It would be a really bad idea. No! Wait!

It’s too late. We’ve lost another.

3 thoughts on “Should MMOs Encourage Altitis?”