Skyforge is a game I was fairly excited about prior to launch. I even gave the beta a try to see how it handled, but while I found it to be a fairly solid experience, it wasn’t quite enough to hold my attention, and by the time it launched I had already shifted focus to other games. 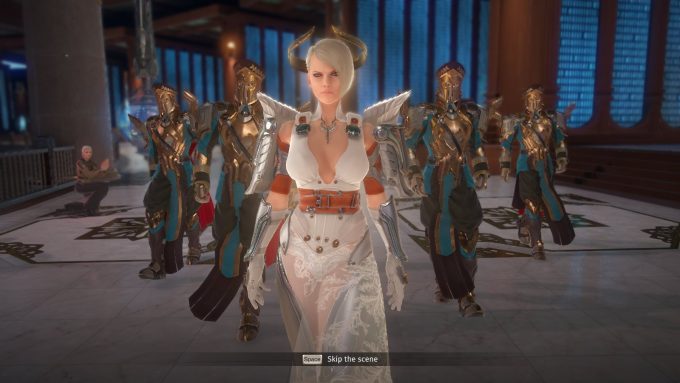 Now, Skyforge has launched a massive new patch called Ascension. Aside from adding a new gunslinger class, Ascension rewrites many of the game systems, supposedly with the goal of making them more approachable and less grindy. This seemed like the perfect time for me to give the game a second chance.

I did immediately notice some changes to the game since beta, though I’m not entirely sure what’s part of Ascension and what came before it.

For one thing, the tutorial is a little different. You now go to character creation first, rather than the game making everyone a generic male character until after the first leg of the tutorial. This is definitely an improvement, though the final boss of the tutorial will still call you “him” even if you’re playing as a female character.

Otherwise the tutorial is the same, and still one of the better introductory experiences I’ve seen in an MMO. Plenty of action and some very nice cutscenes.

The layout of content post-tutorial seems a bit different as well. Thankfully I wasn’t asked to go back and repeat the same content several times as I was in the beta, but maybe that comes later.

Something else new is that shortly after the tutorial every character will be issued a small robotic companion to assist them, though the system seems a bit half-baked. Most of the time I forgot my companion was even there; it really doesn’t seem to do much. There’s a system to upgrade your companion to give it new abilities — some combat related, others gear toward convenience — but how exactly you do this is not at all clear. 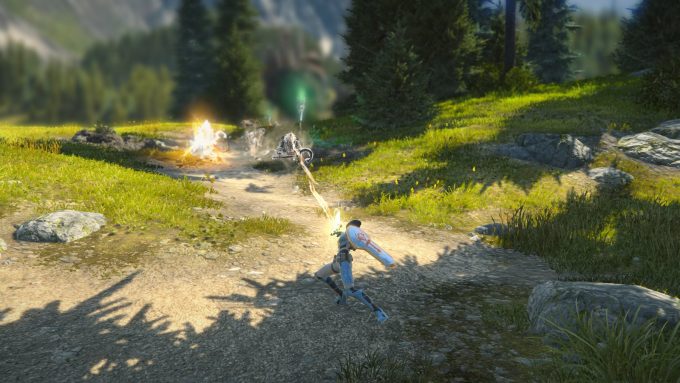 Another new addition is that enemies may now drop powerful, limited use weapons that you can use to wreak havoc. Everything from whips to laser rifles. Those are a lot of fun and add an interesting new element to Skyforge’s already strong combat. However, the drop rates on them seem a bit over-tuned; I got them so often they quickly stopped feeling special.

Finally, I was amused to discover that I had ten days of premium time granted to me… somehow. I certainly didn’t pay for it, and nothing in the game explained it — I only noticed it because the premium bonus was showing up for all my rewards. Perhaps it’s a bonus for new players? I was using my original account, but this was my first time logging in post-launch, so it may have considered me to be a newcomer.

Most of the effort of Ascension seems to have gone towards streamlining the game’s progression mechanics. Most notably, class customization is basically gone. Every member of a class will now have the same abilities, the same passives, the same build.

I have mixed feelings on this. It is true that build systems in MMORPGs are often min/maxed to within an inch of their life, and you quickly reach the point where there’s really only one “correct” build. Anyone who does anything different — out of preference or ignorance — is ridiculed by the community until they conform. A choice where there’s only one correct option is no choice at all, and Ascension’s changes seem aimed at fixing that.

At the same time, I’m not sure going to opposite extreme and doing away with player choice altogether is the right answer. That seems to defeat the purpose of an RPG altogether. I’m not sure I have a better idea, though.

In theory Ascension has also simplified currencies and lessened the grind of the game, but as someone who hasn’t invested much time in the game, it’s hard to say exactly how much difference has been made. There still seems to be no shortage of currencies and different ways to increase your character’s power. 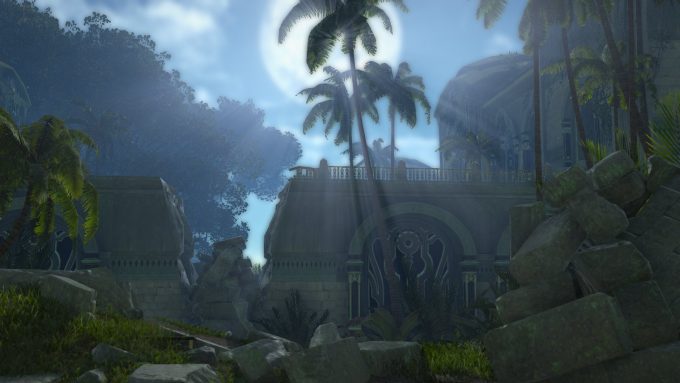 Going in, I had assumed Ascension would make the greatest difference to new players, but now I’m thinking veterans are going to notice it the most.

I’m getting into guesswork here, but I get the feeling Ascension was probably targeted at midcore players — those who had some investment in the game, but were getting left behind in comparison to the most dedicated grinders and min/maxers.

Meet the new game, same as the old game:

Otherwise, Skyforge really isn’t that different than I remember, which has its pros and its cons.

On the plus side, it still has excellent combat. It’s visceral and visually spectacular, but also a fair bit deeper than the average action combat game. A mindless button masher it is not.

It still has stunningly beautiful graphics and a very unique, colorful setting. I admire Skyforge’s unique blend of sci-fi and fantasy, and I wish more games would be willing to break out of the standard fantasy mold like this.

On the other hand, most of my complaints about Skyforge still hold true.

For one thing, that unique setting isn’t explored nearly as much as it ought to be. Environments are tiny and linear, the storyline is shallow, and there’s little to no attempt to flesh out the lore of the world. 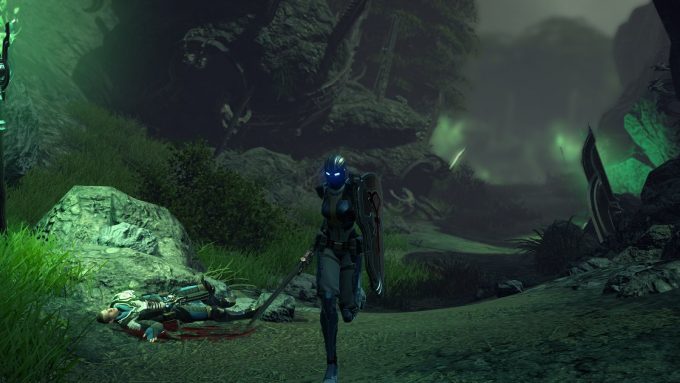 And my biggest issue with the game remains: Your choice of initial class is severely limited. Skyforge has a broad stable of some very interesting classes, but to start you’re limited to three of the most basic — paladin, cryomancer, and lightbinder.

It’s not entirely clear to me how long it would take to unlock additional classes. I don’t get the impression it would be a massive grind, but after a couple of hours, it hadn’t happened, and that’s far too long to spend as a class you’re not interested in.

I don’t have a problem with working to unlock additional classes beyond your first, but I should be able to choose any class I want from the start. I just don’t understand what the point of limiting the choice is, especially in a game with such strong class design. Why do MMO developers so often feel the need to hobble their own successes?

In the end, despite all the hype around how much Ascension is changing the game, it’s still recognizably Skyforge. It’s still got a lot going for it, but not quite enough to grab me. I’ll stand by what I said when I first tried it: If you like action-heavy grinders like Vindictus, you’ll like this game. If you want something with a bit more depth, look elsewhere.