Honesty time: I have had enough of gear. The concept of continually acquiring new and better equipment lies at the heart of virtually all MMORPGs, but I’m just sick of it. It’s an easy way for developers to provide a carrot for players to chase, but I don’t think it’s healthy for the genre in the long run, and I for one am simply bored with the whole concept. 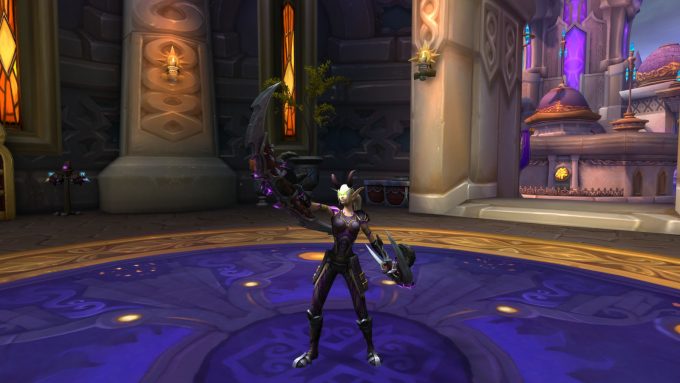 Gear as a vertical progression system works well in single-player games because eventually you’ll have the best gear and be done with it. In an MMO, that can never happen. Regular gear resets are a necessity, so gearing becomes a treadmill where you never really get anywhere. Today’s best in slot will be tomorrow’s vendor trash.

It’s also a terribly binary form of progression. Either the item you want drops, or it doesn’t, and your time feels wasted. This can be mitigated with currency systems, where if gear doesn’t drop a currency that can eventually be spent on gear does, but even that only lessens the problem, rather than solving it entirely.

And of course it creates terrible inequality between players. There is inevitably a large power gap between those with the best gear and those without, fostering elitism and excluding many people from content.

It doesn’t have to be this way. There are other alternative progressions systems out there, and while none are perfect, many can avoid the pitfalls of the gear treadmill.

In most MMOs, leveling is little more than a time-gate. It’s something you work through before getting to the “real” game, which is usually where the gear treadmill kicks in.

But it doesn’t necessarily need to be that way. Leveling is something that can continue indefinitely, providing players constant, incremental power increases. You can see examples of this in Diablo III’s paragon levels and Elder Scrolls Online’s champion points. 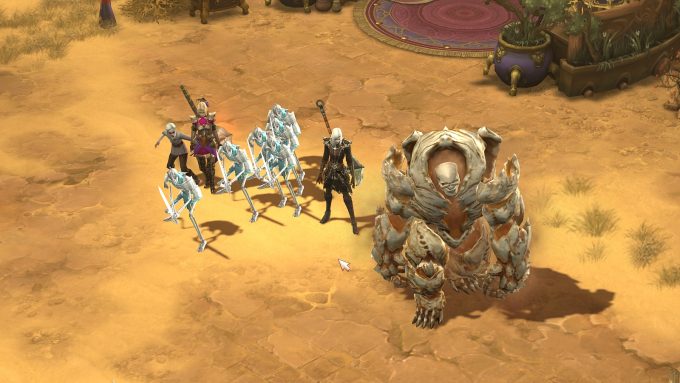 There are some disadvantages to such a scheme. In the long run the constant small stat boosts can add up and begin to create balance issues or other strange behaviors, and as with gear, you risk creating a large divide between the haves and the have-nots, though that can be mitigated with catch-up mechanics.

Endless leveling does have some major positives, though. Because pretty much anything can give XP, leveling is a progression system that offers incredible freedom to the player. Any playstyle can be therefore be meaningfully rewarded. Add global level-scaling as seen in Guild Wars 2 or ESO, and your options become almost limitless.

You can also say goodbye to play sessions where nothing is accomplished because what you wanted didn’t drop. You’re always going to be earning at least some XP. And while it’s still vertical progression, it’s not a treadmill, because the levels you’ve already earned are never made irrelevant. You’re always moving forward.

Not all progression needs to be about helping you kill stuff faster. Progression can instead take the form of various non-combat abilities and buffs. Perhaps players can gain new movement skills, or learn new languages to access quests from isolated NPC races, or gain more incremental buffs to things like movement speed or gold find.

The masteries introduced in Guild Wars 2’s Heart of Thorns expansion are one example of this, and some of ESO’s champion points and Diablo’s paragon levels also offer non-combat improvements.

Horizontal progression such as this is good because it side-steps nearly all of the problems with gear. The gap between veteran and newcomer is largely irrelevant, since both groups maintain roughly the same power level where it most counts. There is no treadmill, as the bonuses you’ve earned are always relevant. Like endless leveling, it’s also a good opportunity to reward all playstyles and make every session rewarding.

The downsides are that non-combat bonuses don’t always have the same “sex appeal” as doing more damage or having more health, and it can be difficult to design non-combat boosts that are useful enough to be appealing but optional enough to not break the game.

Non-combat progression likely works best as a supplement to other systems rather than the core progression model of a game. It can be something to help you achieve your other goals, since not everyone will find it a worthy goal unto itself.

Progression doesn’t even necessarily need to be about gameplay. It can also just be about bringing the flair. There are already plenty of people throughout the MMO community who will pursue gear purely for its looks, rather than its stats. Some wily developer could capitalize on this and put cosmetic progression front and center.

In theory, cosmetic progression was supposed to a key part of Guild Wars 2’s design, though it never seemed to quite work out that way. I don’t think it had enough different looks to choose from, at least at launch, and limiting the transmutation charges needed to a change an item’s appearance was a mistake. If you want to make appearance items a core progression system, it needs to be easy to create, save, and swap outfits at will. Otherwise you encourage people to find one look they like and stick with it forever after.

Star Wars: The Old Republic has a very good outfit system that allows you to save multiple looks and swap between them whenever, wherever. It’s certainly encouraged me to horde a massive amount of cosmetic gear. Also, while it’s not an MMO, Overwatch seems to be doing quite well with a purely cosmetic progression model, so I definitely think it can work.

I think the trick to a really strong cosmetic progression system is to have a wealth of options. Not just the usual gear slots we’re used to, but also visible jewelry, dyes and accessories to modify your clothes, and perhaps unlockable hairstyles or idle animations. 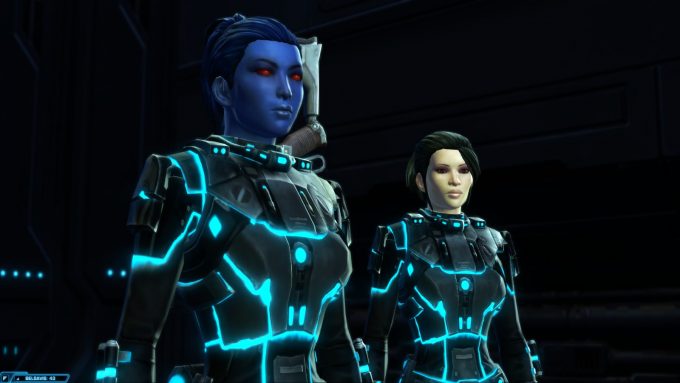 Make it so no two characters ever look alike, so each avatar is a visual record of that player’s accomplishments. Then move it beyond avatars to also include non-combat pets and mount skins. Even spells and abilities could potentially be reskinned, with more unusual effects reserved for the greatest in-game accomplishments.

With some creativity, the potential for cosmetic progression is almost limitless. The only real downside is that, like gear with stats, cosmetics don’t lend themselves to incremental progress very well. You either get the item you want, or you don’t.

Another option for horizontal progression is to continually earn new abilities. These abilities are not necessarily more powerful than what you already have, but simply add new options. This is a more niche option, but for me personally, it’s the most appealing form of progression.

The main example of this I can think of was the late, lamented ability wheel of The Secret World, wherein players constantly earned ability points that could then be spent unlocking hundreds of active and passive abilities. Only a few of these abilities could be equipped at a time, making for careful strategic decision-making and allowing for true horizontal progression. Leveling up different jobs on the same character in Final Fantasy XIV could also be considered a version of this progression model, though a very watered down one.

There are a lot of obvious advantages to this. It greatly narrows the gap between the haves and the have-nots because veteran players simply have more options rather than being directly more powerful.

It also eliminates the treadmill issue. Your old abilities are never invalidated. They will always have uses, even if they’re niche. 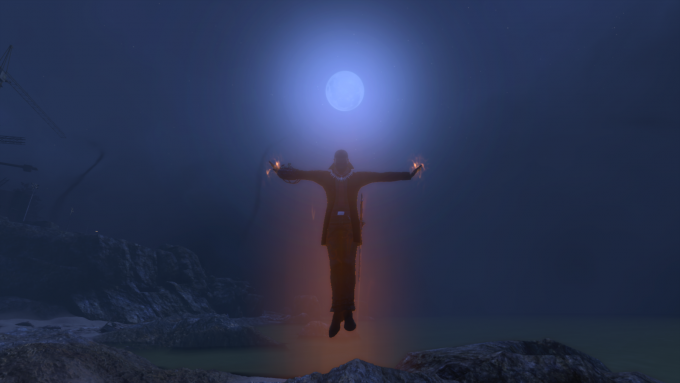 The downsides are the potential balance issues caused by endlessly adding new abilities and the design challenge in keeping the new abilities meaningful and interesting, but I don’t think those are necessarily unsolvable. TSW may have had cookie cutter builds for certain situations, but there were no builds that dominated every aspect of the game, and almost every ability was useful in at least one or two circumstances.

These new abilities could be earned through traditional XP farming as in TSW and FFXIV, but developers could also get more creative. There could be lengthy quest chains where one learns new abilities from a master, or defeating a powerful boss could grant the player permanent use of one of the boss’s powers.

Ultimately, no one single alternative to gear will work for everyone. It would be best to combine a few to achieve a broad appeal and add depth to the experience.

But really, that’s to be expected. Even games that do rely on gear for vertical progression often include at least some elements of other systems.

What is clear is that the gear treadmill is not the be all and end all of MMORPG progression. Developers like it because it’s easy to design, and players like it because we’ve been conditioned to, but the genre can and should do better. There are alternatives out there. All we need is a developer with the courage to try.