I’m on a kick lately of segmenting out MMOs by uncommonly explored attributes and analyzing numbers. In June, I ranked the best MMORPG by year for the past twenty years (including honorable mentions for each year). In July,  I estimated the most played free MMORPGs, sorted by peak player counts. This month, I’m looking at which countries produce the best MMOs.

First, this requires a ranking of the best MMOs. As opposed to June’s best MMORPG blog post, I decided to use an impartial judge to assess the cream of the MMO crop. I selected mmorpg.com’s user ratings as my source due to their ratings’ age and breadth. From there, I chose the top 50 MMOs as a cutoff. This provided a strong sample set without severely diminished quality between the top and bottom of the list. I don’t necessarily agree with the order (Defiance is ahead of World of Warcraft, seriously?), but the list looks solid overall. The result? MMOBro’s first infographic! 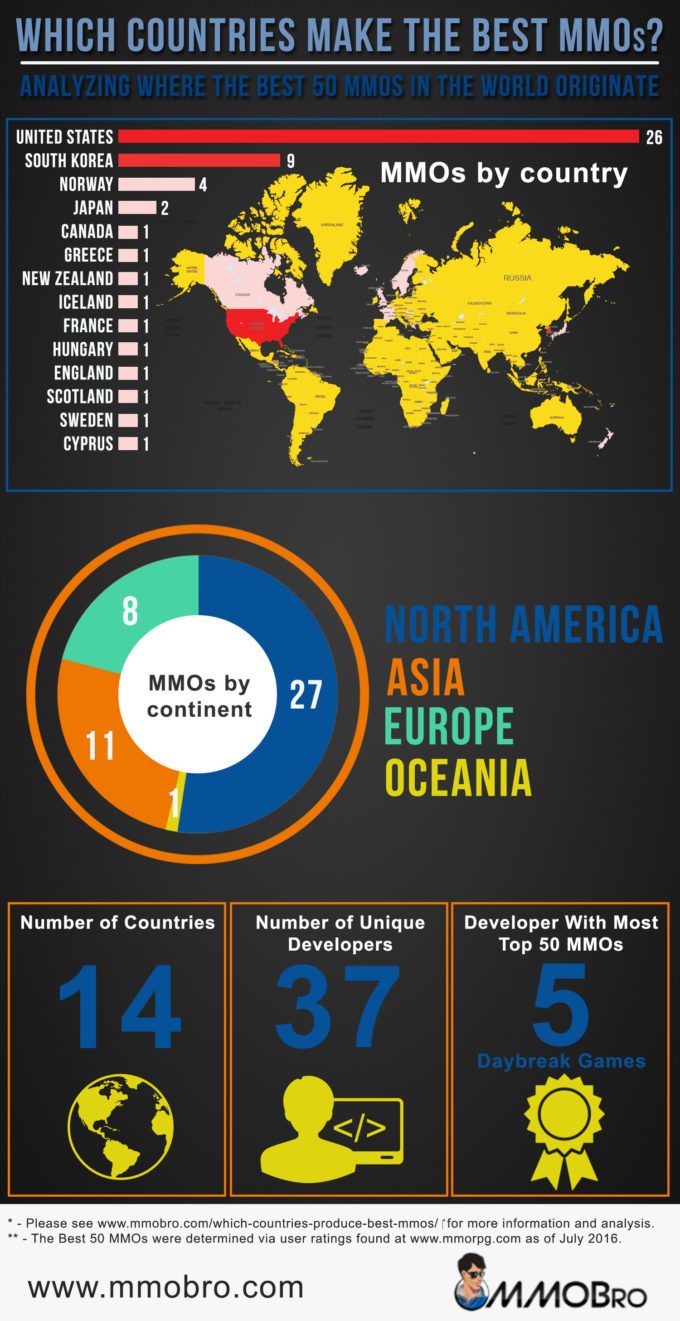 The United States and South Korea were the first countries to begin developing MMORPGs in the 90s. Seeing them as #1 and #2 on the list is to be expected. Thus, I find the data more fun than surprising. It is noteworthy that South America is unrepresented, despite what is actually a strong MMO userbase.

It is important to note that mmorpg.com caters to a Western audience which does skew the list. I researched Korean MMO rankings by popularity (as opposed to ratings), but over 90% of their most popular MMOs are developed in South Korea. It then seemed to me that focusing on a single, large audience would make for a more compelling and relevant read. MMOBro also targets a Western audience (by virtue of the whole site being written in English). Thus, I hope (and believe) for our readers, the validity is not lessened.

Feel free to download the infographic and share it. I only ask you drop a link to us in the process.

And for those fact checkers out there, here’s the complete 1-50 list (which may be different now compared to current ratings). Feel free to ask any questions or point out any inconsistencies.

Faction warfare has served as the backbone for dozens of MMORPGs’ PvP rule sets. The beauty of such a system is that players have no shortage of human combatants yet are still protected by a large community. Free for all PvP like in Eve Online offers a very different dynamic, one where concern for player safety isn’t a high priority. Faction PvP provides the player base the flexibility to engage enemies on their terms with a worthwhile incentive for doing so (if the developers did their job well).

Dark Age of Camelot gave us this potentially amazing system first with an ongoing three way battle between the mythical realms of Hibernia, Albion, and Midgard known as Realm vs. Realm (RvR). Most would agree that Dark Age of Camelot handled this subgenre’s ensemble effort very well. The three way system kept all powers in check and wars were waged on a constant basis. Those envisioning castle sieges, rallying war cries, and armies clashing were pleasantly rewarded for their playtime. Gamers to this day continue to reminisce fondly over the enjoyment they found in DAoC.  Factional PvP remained in a bit of a lull until World of Warcraft’s Alliance vs. Horde hit.

PvP in vanilla World of Warcraft was light hearted fun but had no meaning until the release of battlegrounds. Even then, the benefit of participating in that PvP benefited only the individual. This allowed for a casual stroll into PvP lane but was a far cry from Camelot’s emphasis on the collective over the individual. Unfortunately for those like myself who enjoy organized PvP in MMOs, the studios and publishers decided to copy the commercially mega successful World of Warcraft over Dark Age of Camelot. Of course, I would argue WoW owed very little of its success to PvP. But when trying to make bank off of copycatting, developers often find it difficult to determine which features should actually be unique. PvP with all of its moving parts apparently didn’t find many champions for change amongst the slew of World of Warcraft knockoffs.

Thus, the vast majority of games eschewed many-faction, collective reward focused PvP in favor of two faction, individual reward PvP. That’s not to say there wasn’t some innovation in PvP systems outside of factional warfare (Eve, Silkroad Online, DarkFall), but again those games simply don’t offer that fine balance of danger and safety. As two faction became the norm, games began to cater more towards instances, quests, and the PvE crowd. Two faction PvP is impossible to balance, with Star Wars: The Old Republic probably proving that better that anyone else. The zerg always triumphs and typically draws the more hardcore players, exacerbating the problem further. Without outside aid, the lesser of two factions has no chance. And thus PvP stagnates and forces developers to focus on PvE or instanced PvP to maintain players. It wasn’t until the announcement and release of Guild Wars 2 that we would again see a game with true focus on multi-faction PvP.

Unfortunately World vs. World, the name for this system in Guild Wars 2, failed to live up to Dark Age of Camelot’s legacy. For one, guilds oddly mattered very little in World vs World. Two, the developers balanced PvP around small engages and not large ones. Three, the reward system failed to compel players to “fight for their homeland”. Fourth, there is very little continuity between the semi-instancing and resets. Certainly many people enjoyed and still enjoy World vs. World in Guild Wars 2, but it proved to be a far cry from the bar that Camelot set.

Camelot Unchained, the upcoming MMORPG spearheaded by none other than Mark Jacobs who oversaw the creation and development of DAoC, might revitalize factional PvP. It also might not. There are a lot of good ideas, but will they come together in a fun package? Time will tell. But in my opinion there are a few key factors for success to which Camelot Unchained or any faction warfare MMORPG must adhere.

Guilds need to play a prominent role in the leadership of their respective factions. It’s easy to think that because everyone already has a “home” with their faction that guilds aren’t critical. After all, competition would be between factions and not guilds. Right? Yes and no. While factions give players a direction to exert their efforts, they don’t inherently do so in an organized fashion. Like any military branch, there is a certain chain of command to keep engagements organized. Guilds are what take us from pick up groups to at least somewhat organized war parties. They also play a critical role in the socialization component. 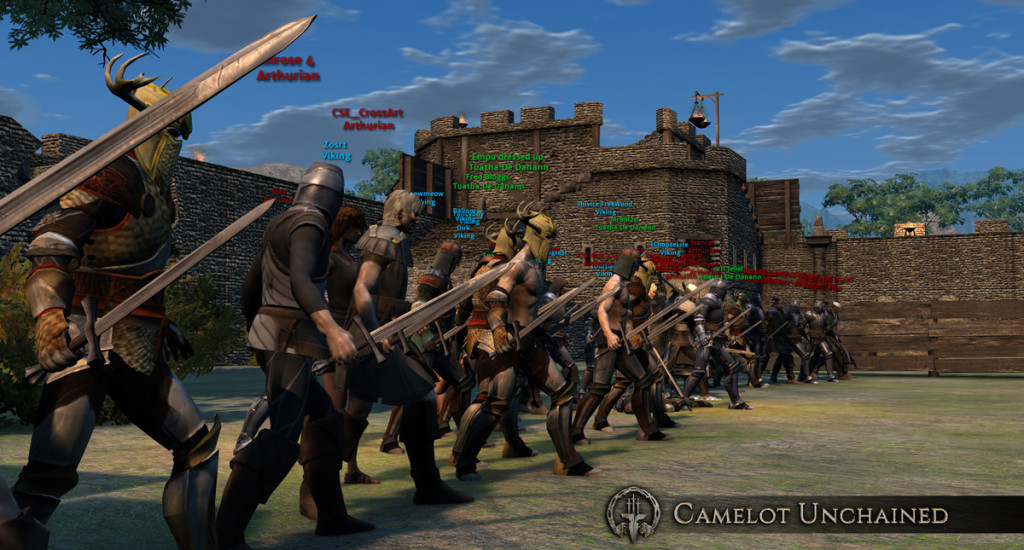 Engaging in, and especially succeeding in, faction warfare contests will need to provide some level of reward commensurate with the effort. That’s basically the crux of MMOs that effort gives reward. While player rewards are nice, guild rewards create a more community driven environment. Unlike PvE focused MMORPGs, faction war MMORPG guilds care about what others guilds are doing. Progression in these games isn’t just about finding twenty people with the proper gear score, but finding twenty other guilds on which your guild can rely.

Guilds must be rewarded and emphasized for a faction warfare MMORPG to succeed or the gameplay will devolve into a mess of PUGs akin to playing Battlefield on a public server.

Two faction warfare doesn’t work. One side gets bigger and attracts better players. Then everything just spirals out of control. It’s fine if PvP is centered around non-persistent battlegrounds like World of Warcraft. In that case though the whole faction thing sort of loses its meaning. What does it really matter who your friends and enemies are when everything gets swept away thirty minutes later?

Personally, I think I would most enjoy ~7 factions. This allows developers to add some real character to each faction. Alliances and war targets would be much more dynamic and interesting with a higher number. Unfortunately, it also requires a larger player base to enact effectively which is a risky proposition. Employing something like 3 or 4 factions is a simple balance mechanism that keeps faction warfare competitive. When one side grows too large or powerful, more factions ensure there are adequate numbers to even things out.

MMORPGs have evolved a lot in the past fifteen years. One game can not and should not try to do it all. A strong vision is essential to delivering a product worth playing. Creating a game that tries to cater to PvE and PvP blurs the vision, splits resources, imbalances one or both for combat, and brings dispassionate players that contribute to an uninspiring community atmosphere. Of course there is more to MMORPGs than PvE and PvP. Additionally, PvE content does not necessarily hurt PvP content. The trick is unifying all of the features with one concerted goal. In the case of this post, that would be delivering the best MMO factional warfare experience possible.

Delivering that experience requires players to fight each other at all junctions. When I see an MMORPG touting multi-faction warfare, I want the content in the game focused on that. This means that the primary (or only) method of advancement should be PvP. Crafting, balance, quests, and even PvE content should funnel into the grand ole war. If it doesn’t then that’s a sign that it’s either not a factional warfare game (and is just a game with a factions) OR the developers don’t have a clear idea of what they want to deliver. In the first case, that’s not necessarily bad (unless you want faction wars). In the second case, that’s a sign to me that the game is setting up for failure.

I really do hope to see factional warfare modernized. It’s an underused player vs. player mechanic that only an MMORPG has the scope to fulfill. There are games on the horizon, but it’s still too early to tell whether they’ll succeed. Time will tell if MMO faction PvP will get the treatment it deserves.