The RPG genre first sprouted when Gary Gygax (and lesser known Dave Arneson) created Dungeons and Dragons. It’s evolved and splintered quite a bit since that day in 1974. This advancement has been unequivocally positive for gaming as a whole. We now have more options than we even know what to do with, as evidenced by places like Humble Bundle selling AAA for as cheap as one dollar. But maybe it’s time for one genre, MMORPGs in particular, to go back to its deep roots.

Top MMOs have spent so much time wondering what they could do, they never stopped to ask what they should do. For as much fantastic content, features, and innovation as MMORPGs have brought to the world, they’ve taken a lot of things too far. In the midst of all of this progress, they’ve forgotten a lot of what it even means to be an RPG in the first place. 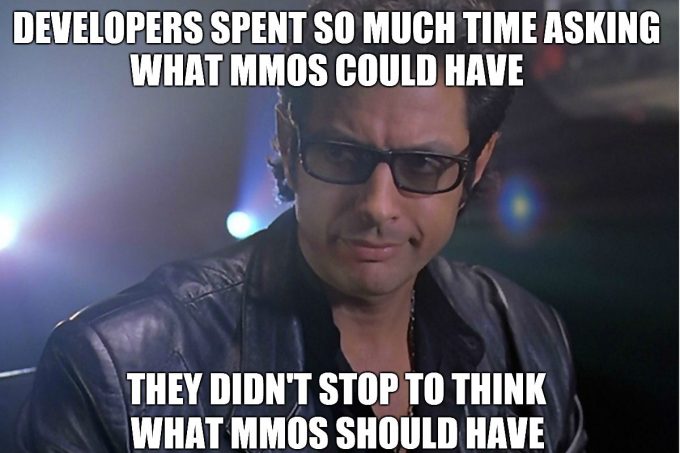 As a handy dandy guide to developers, I offer these six ways D&D can improve your next MMORPG:

Easy enough to start here since I wrote about lowered health pools not too long ago. To sum it up, it’s easier for humans to mentally calculate lower numbers, they’re easier to read, and it makes for more intense combat.

Not everyone likes full on role-playing. I get that. But I’d say that most people playing RPGs enjoy it on some level. They may not enjoy the creative aspect of pretending to be someone else on the spot. Give them a few guidelines to follow though and everything else naturally falls into place. D&D is great for role-playing because character creation itself makes role-playing more accessible. Attributes such as alignment, backgrounds, deities, and motivations offer up a reason to choose certain actions. Now just give us some actual choices besides which spot to grind in and BOOM – role-playing!

In D&D level 20 is basically demigod status. In most MMOs, level 20 is a scrub newbie that toxic veterans laugh at. I’m on board with more frequent small advancements (something Dungeons and Dragons Online does well), but I want a level to really mean something. I want new abilities and new ways to play my character. What I end up with is +100 damage to magic missile. Levels are too much about buffing an arbitrary number and too little about impacting game play.

Not too long ago MMORPGs used to hire GMs to organize impromptu quests. In D&D, a good GM is the difference between a campaign that spans several years and one that lasts a few sessions. So too can a similar impact be felt in MMORPGs. To facilitate a quest-driven approach to leveling, a lot of quests are needed. This need for quantity doesn’t leave a lot of room for quality. While some games manage some pretty impressive storytelling in their AI-led quests, they lack the ability to incorporate other players into the story. This is where GMs can completely alter an MMORPG experience and constantly deliver value to the game’s customers.

5. Drop the Trinity in Favor of the Quadrinity

Most MMORPGs balance abilities around tank/DPS/healer roles. D&D balances abilities around the roles of controller/defender/leader/striker. Defenders tank and shut down melee movement. Controllers kill large groups and crowd control. Leaders buff, debuff, and heal. Strikers deal massive damage to one target. This isn’t a massive difference, but in D&D terms facilitates a broader potential group of encounters that can be fought and overcome.

D&D assigns a challenge rating to every enemy and monster in the game. This in turns allows for a programmatic approach to create balanced encounters. A balanced adventure results from a certain number of easy and hard encounters. Instead of MMORPG developers hand crafting encounters in raids and forcing us to beat the same things over and over to advance, a challenge rating based system could create near-infinite content to challenge us at every level. I’m not saying we need to abolish hand-crafted content, but saving time in one area frees it up for use in another.

If you’re looking for something like this to play now, there is an obvious choice. Dungeons & Dragons Online implements more of these features than other MMORPG. Of course, because of the focus on dungeons and instances, it does lack the massive feel other MMORPGs provide. Still, it does D&D better than any other MMORPG on the market. Maybe that’s a good enough reason for you to give it a spin until digital gaming seizes the opportunity to learn from classic tabletop gaming.