As pretty much any gamer knows, free MMO games are rarely truly free. Servers and new content cost money to create, and developers aren’t running a charity service. Therefore, they need to monetize their games to pay for those things and to pay for their time. Unfortunately, a most games give insurmountable advantages to big money spenders that free players simply cannot achieve. This is pretty frustrating, even gamers willing to spend money, because it means everyone has to pay just to keep up. The ideal system encourages players to spend by providing options to supplement a fun activity, rather than putting that fun activity behind a paywall (commonly referred to as a pay to win or p2w game).

Below is a list of games which should offer fair, free to play content for gamers of all genres, ranging from tank simulator fans to lovers of cute JRPG style MMOs. So which free to play MMO games best eschew pay to win in favor of a fair, freemium model? Read on! 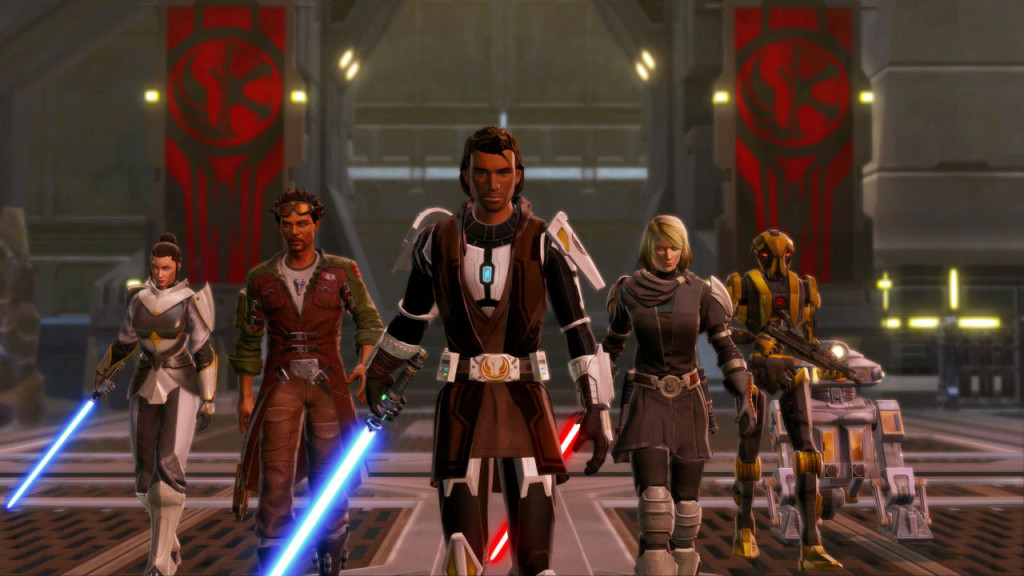 In Star Wars: The Old Republic, the pay shop is setup for convenience and access to content. Certain costumes are available only by paying money, but they do not enhance the character’s power. Most players who pay will choose the subscription model as that’s what Bioware incentivizes the most. Paying for the subscription permanently unlocks the credit cap (which can be removed temporarily by free players) , gives players EXP faster, adds rest EXP, and adds unlimited access to special content such as Cartel Warzones and Space missions. However, there are plenty of other options for advancing through both PvP and PvE outside of this special content. Free players can get really far into the game without noticing restrictions and even when the decision comes to possibly pay for the game, it’s not very expensive. In some ways, Star Wars offers a really, really long demo for free players and a subscription simply unlocks maximum fun. 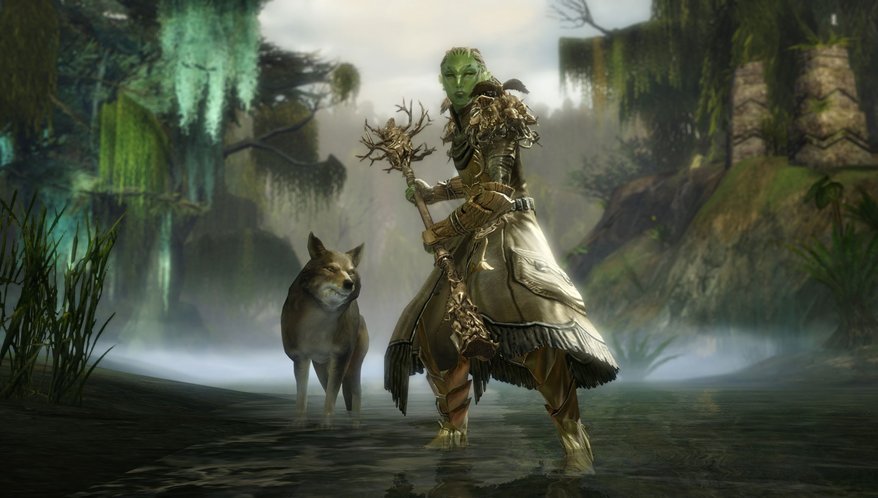 Guild Wars 2 follows a similar model to Star Wars, encouraging free players to switch to paid by offering more convenience and more content. Unlike Star Wars though, players only need to buy the full priced game once to gain access to this content rather than pay a subscription. Most of this content becomes unlocked by the time the player reaches higher levels such as World vs. World at level 60 where hundreds of players fight hundreds of other over keeps, castles, and supply points  and at level 30 an automated ‘looking for group’ feature. These are always free for paid players. Those who buy the game also gain access to daily login bonuses, world transfers, more inventory spots, and more characters slots. Anyone can also buy gems to gain access to cosmetic content as well. Guild Wars 2 is fun from start to finish, which is ideal for any game, free to play or otherwise. Within a few hours, players can decide whether purchasing the game is worth it to upgrade their experience. 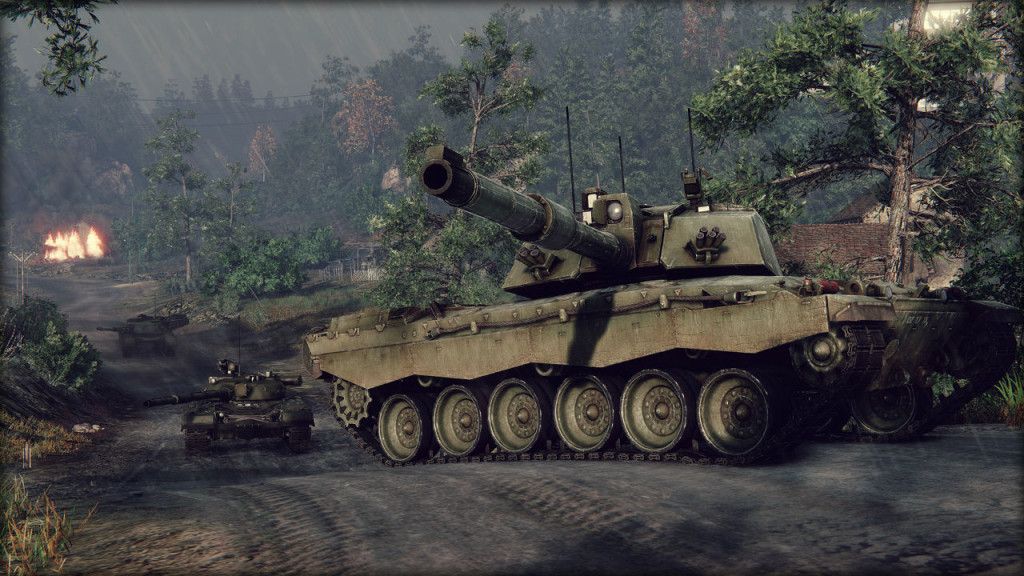 Those who have played World of Tanks before will be happy to see another tank simulator MMO enter the market without p2w game features. Although World of Tanks offers the same end game platform for free and paid players and isn’t a bad choice, there’s a lot more of a grind involved to get to and stay at the top. Armored Warfare doesn’t have as many premium features that players have to pay for in order to compete in top tier combat. The thing that World of Tanks players view as most pay to win is premium ammo, and that’s not something Armored Warfare sells. Of course players will gain access to better tanks faster in Armored Warfare, but the economy in the game is a lot more fair compared to its closest competitors. Instead of worrying about paying in game money just to use their tanks effectively, players in Armored Warfare can instead look ahead to which tanks they want next.

TERA is such an anti p2w game that players who don’t care about costumes won’t even see much of a difference between paid and free play until end game. The company seems to make the majority of its money off of costumes and appearance changes, especially for its cuter character models. While there are some really great cosmetic options that may make you jealous, none of those give any statistical bonuses. In the end game, players who pay will essentially have higher drop rates for equipment compared than their 100% free to play counterparts. So free players will need to clear more dungeons or grind for more gold to make up for the RNG differences compared to paid players. But it’s a great system that simply saves paid players time without providing any permanent advantage. TERA really gets the time = money equation right and avoids paying to win. Additionally, better equipment only goes so far because TERA’s twitch based combat means player skill counts for as much as player equipment. 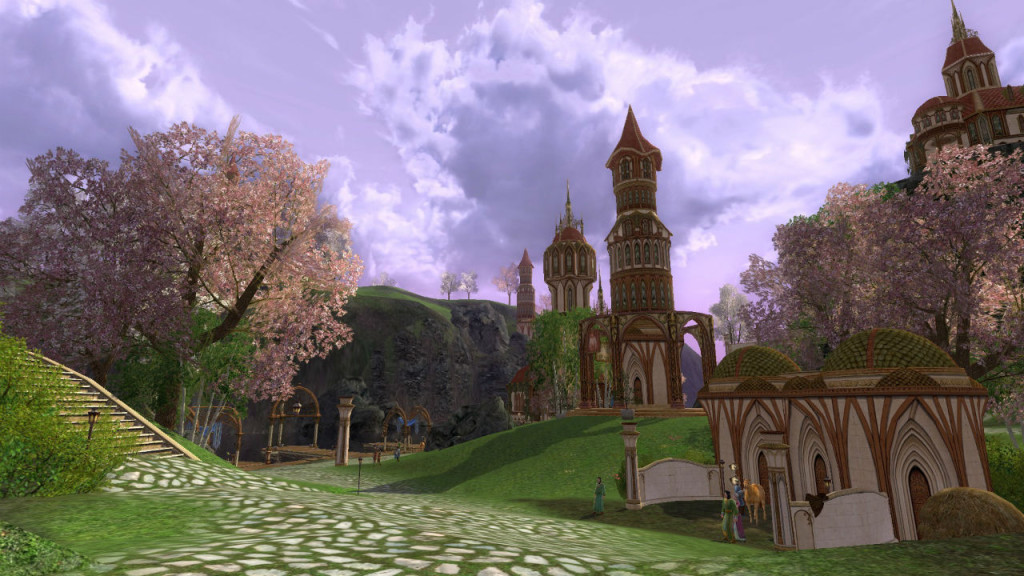 Lord of the Rings Online offers a really great free to play model for those who hate pay to win games. Instead of focusing on convenience, the company chooses to focus on providing content to players. This content can be unlocked individually for those who prefer to take their time. For those who play more regularly, a subscription will be more efficient. All of the expansion areas such as Moria and Helm’s Deep and mode games such as monster play must be paid for with real money. Players who spend money will also level up a bit faster, but this has no impact of long term strength capabilities. There are several small benefits for becoming a paid player as well, but access to the entirety of the game world is the biggest boon for those who decide to pay money. Lord of the Rings is something that really can be enjoyed by purely free players, especially those who play more casually. 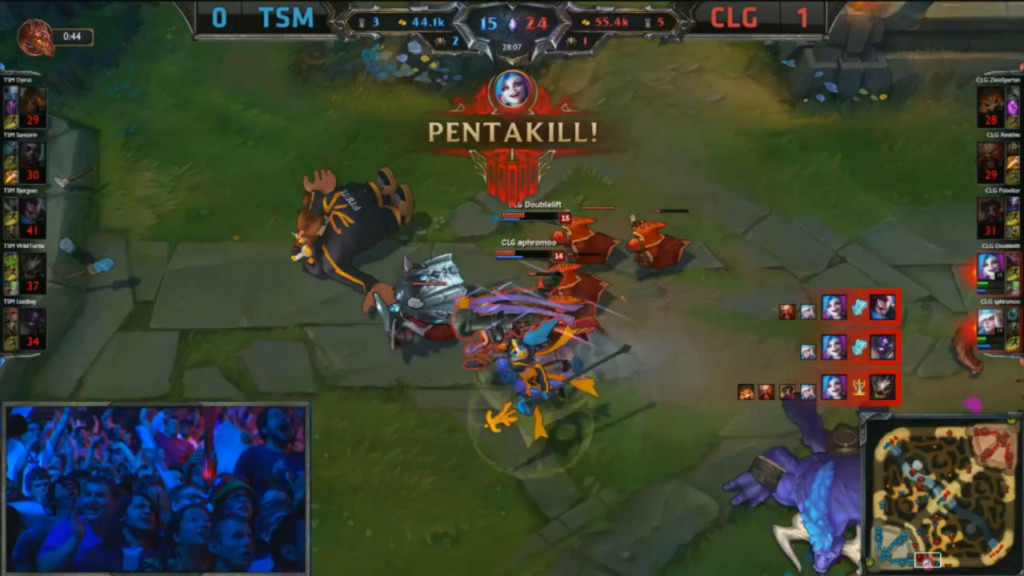 Although League of Legends’ status as an MMO is debatable, given that players only interact with 9 others at a time, it does offer a great free to play model. As a MOBA, players take on the role of a single champion for roughly a 30-minute 5v5 match. These champions gain levels and buy items in the confines of an individual game, which do not persist between games. The player’s account does level up to give access to runes and masteries, which slightly boost the champion’s strength. However, players are always matched against others around their same level so there’s no benefit in a competitive sense to paying money to level up faster. Where the game really makes money is off of skins for champions to change their appearance and from buying the champions themselves. Every champion can be purchased with real money or in game currency. And the champions that cost more aren’t necessarily more powerful. It’s entirely possible to play League of Legends competitively with a relatively small roster of champions. More champions does provide more variety which can be part of the fun for some in a game like this. League of Legends is absolutely not a p2w game and is a very fair game to play completely for free.

I’ll start by saying Astro Empires is by far the most pay to win game on this list. However, it is the most fair out of all of the empire building browser games out there that I could find. It’s mainly on this list to provide an MMO browser strategy game that isn’t pay to win for those interested. Whereas most of these empire building games give you straight power for cash, Astro Empires simply caps your maximum strength until you pay for premium time. What’s the difference? Well in a browser empire MMO, like Wartune for example, players can build armies, structures, and resources as fast as they want by paying money. Players can literally finish buildings instantly that take free players over one day of waiting to finish. There’s no cap to this ‘instant building finish’, and it’s easy to see how much of a pay2win game scenario this creates. In Astro Empires, players simply can’t expand their empire past a certain point without paying. So to grow into a massive empire, players much spend money. However, players can’t spend tons of extra cash to get ahead like they can in a game like Wartune. The premium time isn’t too expensive either, and the game can be played without limitations for long enough to get a feel for the game. There’s no fully fledged empire building MMO where free players can truly compete with paid players, but Astro Empires seems the least egregious of the bunch. 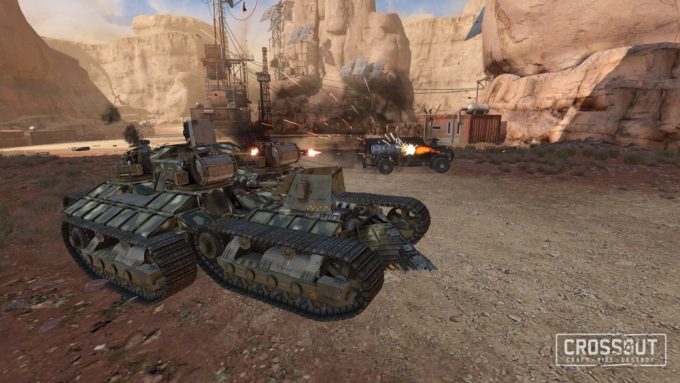 This MMO walks a fine line when it comes to premium currency. Everything in the game is absolutely obtainable through in-game play and a reasonable (meaning not obsessive) play schedule. That said, players can spend real money to progress faster. While doing so may be fun in the short term, everyone eventually ends up in a ranking tier appropriate for their skill level and vehicle strength. I’d actually argue against spending anything more than $20 for the first few months of play. You’d only be artificially increasing your rank instead of learning to play the game against people of your own skill level. And at some point, that’s going to lead to frustration which sort of defeats the whole purpose of playing free MMOs or games of any kind. 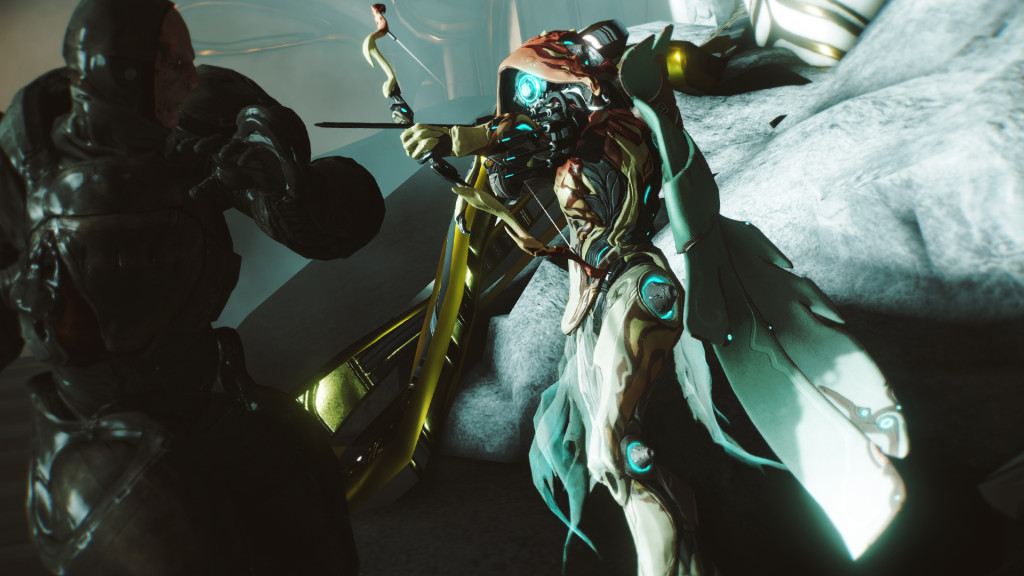 Warframe is an example of a game that chooses to do free to play by giving players quicker access to more options and more content. Similar to MOBA champions, Warframes differ in the role they offer to a party and their playstyle but aren’t necessarily stronger than one another. They also must still be individually mastered through in game play so players will not simply be able to reach the top through paying cash. Similar to Guild Wars 2, the premium currency can be sold/traded between players. This allows all players to purchase equipment components and the convenience driven items that comprise the majority of the cash shop. Free players may consider acquiring top tier equipment to be a bit of a grind without paying money. However, Warframe offers a ton of interesting missions that can be completed solo or as a group. Reaching the top is certainly faster with money in Warframe, but all players regardless of spend will cap out at the same power level. If you are more about the journey than the destination, Warframe is a solid sci-fi, action based MMORPG. 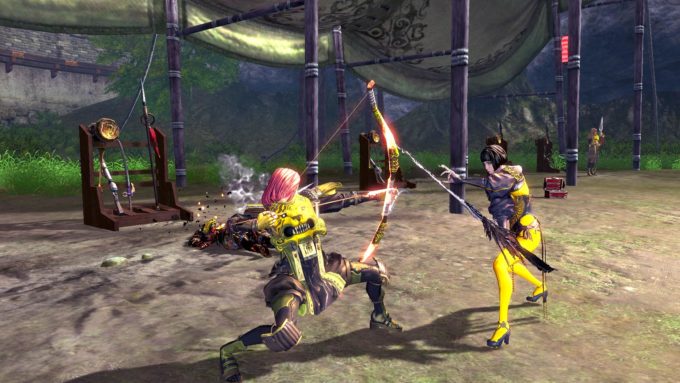 There’s a lot of grinding in Blade & Soul, but it’s not one of those games where the endgame is blocked off from free players. Paid players can certainly skip some of that grind to speed up the situation, but it’s far from insurmountable (especially compared to something like ArcheAge). Terminology matters, and I’d lump Blade & Soul into the category of Pay to Progress. You may disagree with that terminology and lump all of them in the big P2W bucket. If that’s the case then definitely avoid this game. Blade & Soul offers relatively modern combat in a compelling package of advanced skills. It’s just that in order to see it all in a timely fashion, paying a little bit of money will go a long way.

The path to delivering a fair non-p2w game lies in offering visual customization, gameplay variety, and decreasing leveling grind. There’s plenty of money to be made in this route as some of these titles are the most popular of the free to play genre. It’s a lot easier to develop a successful game long-term when it’s not just paid players having fun. And these 10 free MMO games that aren’t pay to win should give everyone plenty of options to find something enjoyable to play.