Sea of Thieves is currently sitting on a 5.2 user score on Metacritic. The vast majority of complaints relate to lack of content and/or progression. Mind you, progression has never been a consideration for Rare when developing their pirate themed MMO. They weren’t hiding anything, but come release a huge community railed against the design decision. The only “improvements” to be acquired in the game are purely cosmetic. While looking cool is certainly a driver for a lot of players, it doesn’t alter gameplay. And that’s the problem that Sea of Thieves is facing – the game grows stale fast. I guess it at least fixes the problem of wanting to make too many alts. 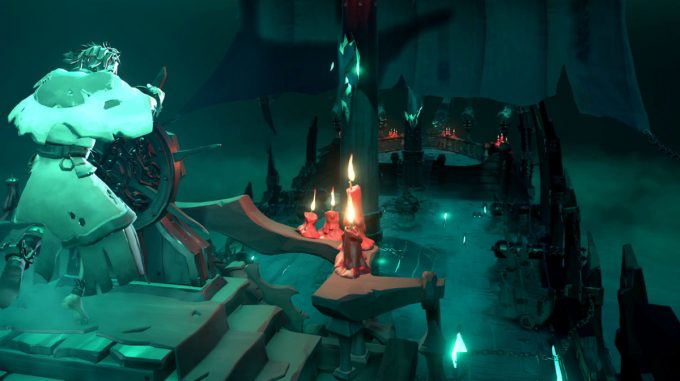 Members of the community lodge complaints of nothing to do after only a few hours of play. And that may be true in a sense compared to other more grandiose MMOs. The directed activities in Sea of Thieves are limited to quests to kill skeletons, find buried treasure, or hunt down trade goods like pigs. There’s little variety to sate players desire to see something, anything change. That the game lacks statistical progression amplifies the routine nature of these activities. Rare counts on the dynamic nature of PvP to mix up this routine as other players can freely kill one another to steal each other’s treasure. And until the treasure is turned in at a specific NPC, it’s fair game for anyone else. The problem is that with the open sea sailing, there’s no guarantee you’ll find any meaningful PvP. Even when another player pops up on the horizon, it can often mean a one sided affair with a 4-player galleon crushing a 2-manned sloop. This describes the entire gameplay loop for Sea of Thieves.

It sounds overly repetitive, but is it? Diablo clones revolve around killing hordes of enemies whose diversity makes little impact on gameplay. Cooperative shooters like Vermintide task players on banding together to fight hordes of enemies with the gameplay variety coming from different maps. Even MMOs can seem rather repetitive once you peel back the layers. Quests rarely veer far off from killing X monsters and fedexing items for incapable NPCs. Sure, dungeons and raids inspire wonder – but usually only the first time around. The non-boss monsters themselves rarely demand players do anything different to fell them. So whether or not the enemies in most MMOs consisted purely of skeletons and skeleton captains ends up making little difference other than that very sense of progression. And like Sea of Thieves, PvP in MMOs tend to be pretty hit or miss. Sometimes the experience is legendary and sometimes it’s a waste of time.

Despite the general repetitive nature of these games, they’ve all flourished in their own respects. The differences all boil down to progression. Diablo constantly opens up new challenges based on acquiring bigger and better loot (or unique set bonuses). World of Warcraft always has a new raid challenge availability to test one’s mettle. Vermintide’s system provides a large stock of increasingly difficult challenges to undertake. Along the way, players increasingly feel more powerful. This is done through multiple methods of progression such as new abilities, better stats, new maps/levels/dungeons, new enemies, new talents, and new gear. The core gameplay loop can stay the same as long as something changes. Rare’s stated goal is to provide egalitarian stats where only player skill affects success. It’s a noble pursuit, but unfortunately they’ve lost sight of why progression matters.

In fact, the game does offer a limited form of progression comparable with its contemporaries in related genres. As players complete quests and turn in treasure, they earn respect and renown amongst the game’s factions. This opens the doors to lengthier and more detailed quests. One could simply say that it’s just adding a few more steps to the existing quests, but that would unfairly discount the increased sense of risk and reward the player has earned for their efforts thus far.

Can Sea of Thieves survive without gameplay changing progression? We’ll find out as early as the next few months. Their content plans speak of adding a large suite of options to the gameplay loop – new areas to explore, new AI enemies, and weekly events. But by giving players a bundle of carrots without dangling the stick first, it creates two problems. First, everything can and will be accomplished immediately so what will there be to look forward to? Secondly, gamers enjoy the sense of pride and satisfaction from unlocking these opportunities in the first place. The sheer fact of having had to work for something that has made one’s character better leads to a “sunk cost” mindset that enthralls players unnaturally long.

Sea of Thieves looks like it’s going to end up as game to come back for every once in a while. I think for most people, the gameplay loop to acquire better cosmetics simply feels too grindy. While MMOs aren’t truly any better in this respect, they do hide it better. Constantly doling out new toys or arenas to play in is like a slot machine that pays out on a regular basis. Choosing to eschew progression in Sea of Thieves is a risky pursuit precisely because they’re forcing themselves to build truly novel, varied, and unique content to entertain players. Progression is easy and sucks gamers in (which is why we see it now in practically every gaming genre). If you want more proof, look no further than idle clicker games with literally no gameplay other than progression. The most popular of these, Clicker Heroes, constantly hovers around Steam’s top 50 most games played.

Personally, I believe the game would have been better off with unlockable (but balanced) classes or weapons. But that doesn’t mean Rare can’t bring their equitable MMO world vision to life. It’s just going to require dedication, frequent effort, and a ton of creativity. They’re certainly fighting an uphill battle, as I believe the number of current MMOs that could survive with Rare’s progression system could be counted on one hand.

Gamers are obsessed with progression, but if Rare can succeed in quieting their community’s discontent while maintaining their vision they will do more than earn some dough. They’ll lay the groundwork for an entirely new type of MMO. That alone has me rooting for them.