Like the “holy trinity” of group roles and tab targeting versus action combat, the issue of button bloat in MMORPGs remains a hot topic in the community, with strong opinions on both sides.

Button bloat refers to the habit of certain MMOs — especially older and more traditional titles like World of Warcraft, Rift, and Star Wars: The Old Republic — to cover the action bars of every class and every character with dozens of different abilities, many of them niche utility skills that are rarely used, as opposed to the much smaller sets of abilities seen in games like Elder Scrolls Online, Neverwinter, or The Secret World.

Action bar bloat has its share of defenders, especially among more old school players, and it’s definitely not a black and white issue. There is a strong degree of personal taste here, and neither side is necessarily right or wrong.

But there are strong arguments that can be made against button bloat. It is a design paradigm with some significant underlying flaws.

If you’ve ever struggled to understand the appeal of smaller ability sets or if you just want to understand the debate a bit better, we now provide you with some of the strongest arguments to be made against MMORPG button bloat.

In gaming, the ideal design philosophy tends to be “easy to learn, difficult to master.” You want systems that are intuitive enough for newer or less skilled players to be able to quickly achieve a basic level of competence, but that also offer enough depth and complexity to challenge the best players and create a high skill ceiling.

Button bloat, on the other hand, is difficult to learn, but easy to master. Throwing dozens of abilities at new players is very overwhelming, and they can easily end up lost on what abilities to use when. It’s a huge amount of information to parse at once. 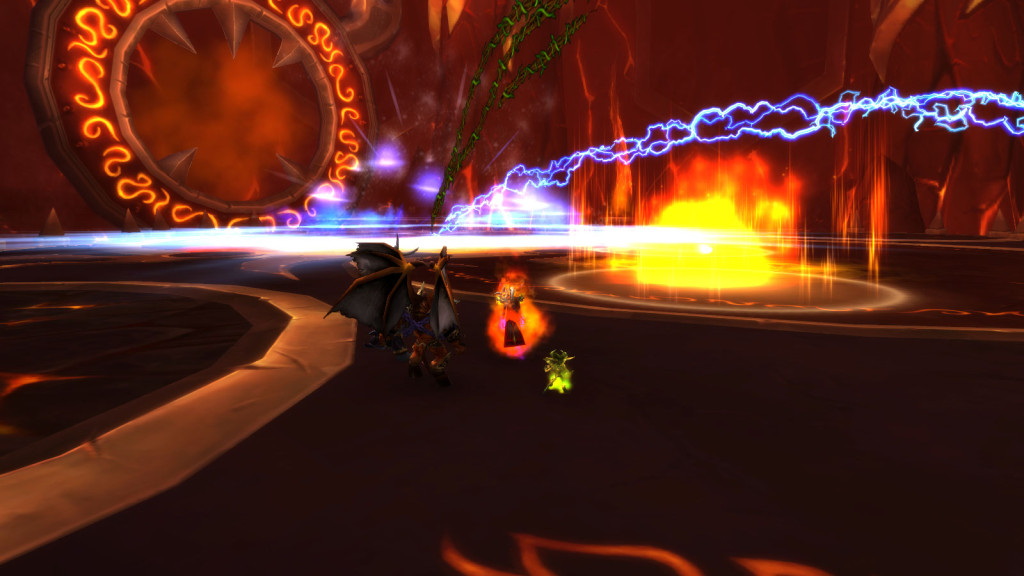 On the other hand, MMORPGs with a huge number of keybinds tend to be relatively simple once you learn your toolkit. They tend to favor rigid rotations that are fairly simple to execute. While the learning curve for MMOs with button bloat tends to be very high for completely inexperienced players, those who are used to the system can simply Google the ideal rotation and achieve a decent degree of mastery in no time.

Such a system benefits no one. The top players aren’t challenged, and newer players have too steep a barrier to climb.

It distracts attention away from the game world:

I had a revelation recently while playing Star Wars: The Old Republic — a game that could be the poster child for unnecessary button bloat. While leveling a Jedi alt, I realized I was spending nearly all my time looking at my action bars.

Not the enemy mobs, or the environment. Just buttons on a bar. I had so many different abilities with different cooldowns and procs that it devoured all of my attention.

Of course, that’s leveling content, which requires very little situational awareness. Developing tunnel vision on your action bar can get you killed in high end raiding or PvP.

But thinking about it, even in more challenging content, I still put the majority of my attention on my bar in games with excessive button bloat. I just make sure to glance up at the battlefield frequently to make sure I’m not about to die to a ground-target AoE. 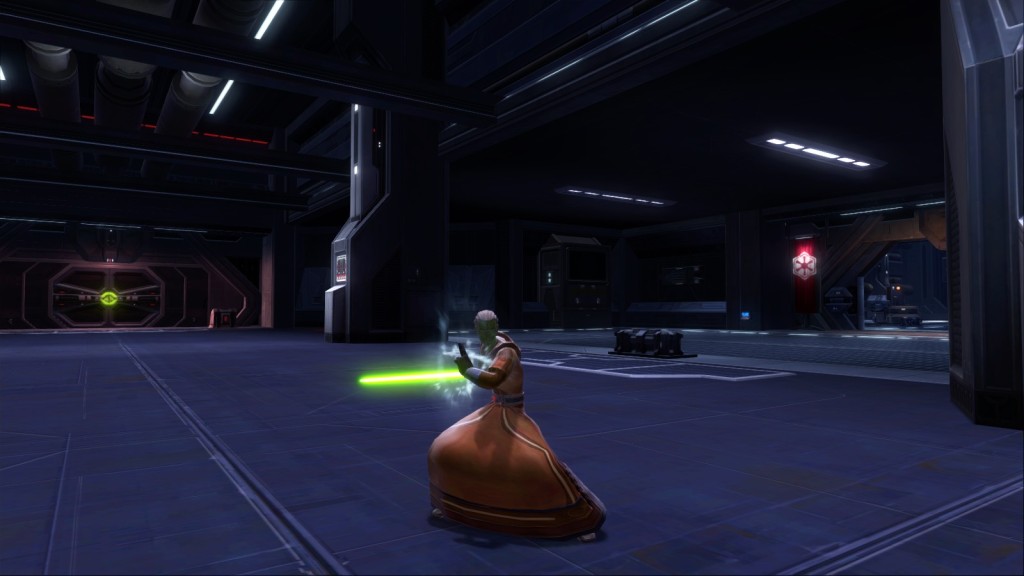 This seems backwards. MMORPGs are supposed to be about transporting us to virtual worlds, about immersing us in these wondrous imaginary realities. Spending all your attention baby-sitting a bunch of tiny icons seriously detracts from that experience.

Even if you have managed to memorize all your cooldowns, procs, and ability interactions well enough that you don’t need to look down at your bar often, the fact remains those sprawling action bars are taking up a lot of screen real estate. Add to that quest trackers, the mini-map, raid frames, and any add-ons you might be running (in games that allow them), and you can end up looking at the game through what amounts to a very narrow window.

It is inevitable that the more abilities you have, the less important each one will be. The more developers spread out your toolkit, the more niche each skill becomes, and the less impact each ability in your rotation can have.

To use SW:TOR as an example again, I must confess that I do not know what several abilities on my main’s action bars actually do. I read their tooltips when I unlocked them, dutifully dragged them onto my bar, and promptly forgot about them. They’re simply too niche for me to have much use for them.

Now, I’m sure that if I was get into high-end raiding or competitive PvP, I would eventually find a use for these very specific skills, but the fact remains that I have been able to experience most of the game’s content while ignoring several elements of my toolkit, and it hasn’t significantly impacted my performance.

If you can safely ignore some skills for most of the game, is it even worth having them in the first place?

Even for abilities you do use regularly, it remains the case that the more you have, the less meaningful each will feel.

A common complaint that has existed over the years for enhancement shamans in World of Warcraft is that their core rotation contains so many abilities that none of them feel exciting or impactful to use. Their damage is spread too thin over too many buttons.

But when action bar bloat spreads out of control, this becomes true for everyone, to varying extents. Abilities lose their identity, their excitement. It’s just a nigh-endless procession of weak little hits until the enemy falls over.

That’s not going to be true of every single class in every game, but the worse your MMORPG’s button bloat becomes, the more widespread and severe the problem will be.

Contrast this with games with much fewer buttons. In The Secret World, for example, every ability I use feels memorable, exciting, and impactful, despite the fact that they’re not necessarily any more visually or mechanically interesting than their counterparts in more keybind-heavy MMOs.

To be blunt, five fingers plus dozens of buttons to manage isn’t the best math for an enjoyable experience.

Personally I’m not fond of having to tie my fingers into knots juggling all the various shift modifiers, macros, and other tricks you need to have access to all your important skills in button-happy MMOs. It’s doable, but it’s not the most natural feeling thing in the world.

And I’m an adult man of roughly average height and weight. That is to say my hands are of a decent size and can reach a good chunk of the keyboard. I’ve talked to people with smaller hands — mostly women — who struggle a lot more to reach everything they need.

I shudder to think what it must be like for people with physical disabilities.

You can mitigate this a lot with specialized peripherals like gaming mice, but not everyone is willing or able to spend the extra money for such things.

It (sometimes) cuts down on character identity:

This isn’t universally true, and it’s an issue that games with fewer buttons can also suffer from, but one unfortunate side effect of button bloat in MMORPGs is that it can begin to detract from the identity of classes, specializations, and characters.

The more abilities you add, the harder it becomes to distinguish between different characters and builds. If everyone has a self-heal, mobility skills, some crowd control, damage over time abilities, and so forth, it gets very hard to define the specialties and identity of a class or specialization.

Similarly, if you can fit every spell your class has onto your bars, there’s less opportunity to distinguish yourself from other players of the same class. People don’t know you as Jill the ranger who specializes in long-range crowd control. You’re just Jill the ranger, same as every other ranger. 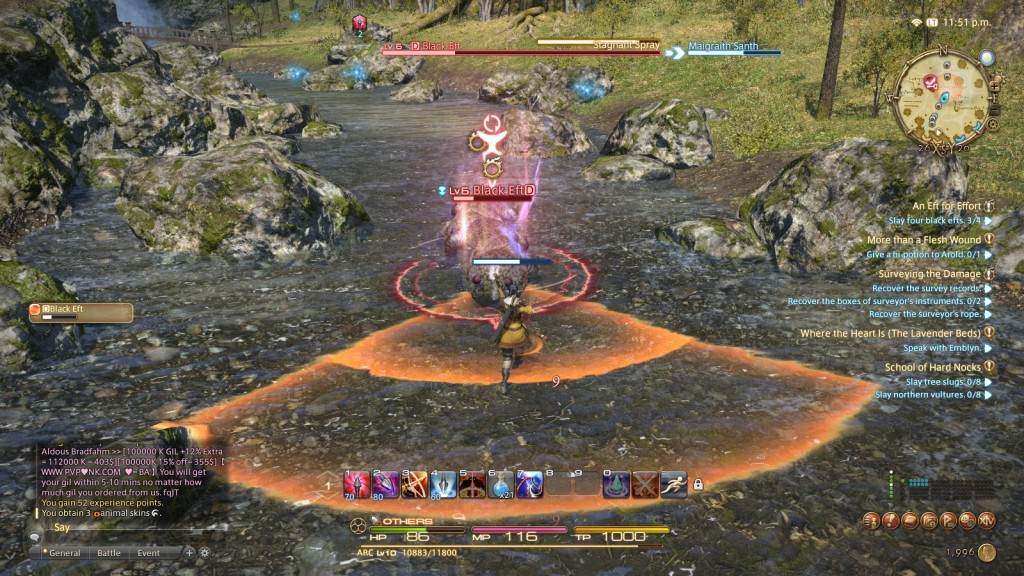 This can sometimes be an issue for MMOs with small ability bars, too. Some developers use such a limited ability set as an excuse to strip every class and build down to a handful of abilities, and that’s that.

But for those who provide a wealth of abilities and make players choose a few to equip at any time — like The Secret World — it opens up a tremendous opportunities for strategic choice based on circumstances, as well as unusual and interesting builds that create very strong character identities.

The debate isn’t going to be resolved any time soon, but hopefully this can at least shed some light on why MMORPGs have been trending towards smaller ability sets and cleaner action bars.

3 thoughts on “The Case Against MMORPG Button Bloat”