EVE Online is a game that generates strong feelings. Some love it, some hate it, but everyone has an opinion. Whatever side you take, it’s clear the game has carved itself a strong niche. It has a very passionate core fanbase and has achieved incredible longevity within the MMO space. With the recent outbreak of World War Bee, EVE is in the headlines more than ever these days. 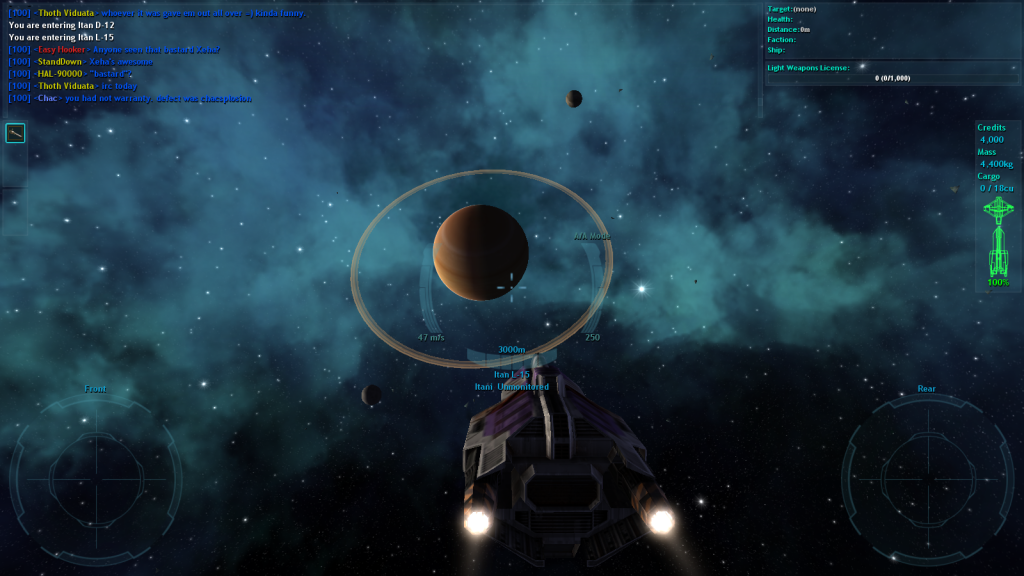 There tends to be a perception that EVE’s lasting popularity is at least in part due to a lack of competition within its particular niche of space-based sci-fi sandboxes.

But that perception is not entirely rooted in reality. Take, for example, Vendetta Online. It’s a relatively obscure MMO, but for the past ten years and more, it’s been quietly chugging along, providing an extensive sci-fi universe for aspiring space ship pilots to explore, exploit, and battle over. It offers many of the same features as EVE, and can even boast some accomplishments EVE lacks.

I decided to take a look at Vendetta and see how it stacks up relative to its more famous cousin.

The most immediately obvious difference between EVE and Vendetta is their wildly different control schemes.

EVE has often been criticized for its rather stilted and sometimes arcane controls. It’s a game of menus, and it feels very artificial. It doesn’t deliver on the fantasy of darting through space as an ace pilot.

Vendetta is a completely different beast.

Vendetta Online gives players much more immediate and direct control of their ships and makes piloting a much more realistic affair. Twitch-based controls give players the freedom to dart and weave through all three dimensions.

To get into more detail, Vendetta offers a choice between two control schemes that can be easily swapped between at any time based on preference or the needs of the moment.

The first, default option is an “aircraft” style mode where much of the piloting is simplified. Point the mouse in the direction you want to go and accelerate (or decelerate). The game handles the rest. This is extremely intuitive and easy to pick up, though it does lack a certain degree of precision and can be slightly awkward in certain circumstances that require a more careful touch.

The second mode is more interesting. It aims for realism by giving players the freedom to move their ship in three dimensions as an actual spaceship would. Vendetta has a near-total adherence to real Newtonian physics. Hope you paid attention in science class.

This mode is obviously a lot more challenging, and it comes with a real learning curve. It’s pretty easy to end up spinning wildly out of control, the stars blurring into a nauseating kaleidoscope around you.

But despite that, I quickly came to prefer the controls in Vendetta Online. Learning curve or no, it offers much greater control and precision, and personally I just found it much more fun. It is so true to life that it just immerses you in the game utterly, and it’s a beautiful thing when you get it right. Even something as simple as gliding into a docking port becomes a thrill. I never imagined a mere control scheme could make such a difference.

I imagine that experienced players with good twitch skills and a strong stomach could pull off some truly spectacular maneuvering, and I expect the high end PvP in Vendetta must be something else.

Those who are not quite such sci-fi nerds may have a different experience, but I kept hearing Kara Thrace’s voice in my head throughout all my time with Vendetta. If you ever wanted to be Starbuck, this is the game for you.

The one downside is that Vendetta’s realistic control scheme makes looting rather difficult. How you collect loot in this game is to simply fly into it, which sounds perfectly easy, but small loot boxes plus big empty space plus hyper-realistic physics leads to some real frustration. I spent more time than I’d like to admit fluttering about in little spirals desperately trying to impact the loot right before me.

Maybe there’s an easier way, but if so, the game needs to make it clearer.

Like the flight controls, the combat in Vendetta is simple in concept but potentially complex in practice. In essence, you just point and shoot.

But once again, the scale of space and the realistic flight model makes things a bit more interesting. You need to anticipate, firing at where the enemy will be, not where they are. The game helps a little with this with a reticle that attempts to predict enemy movement, but it’s not perfect, so there’s still a fair bit of player skill involved.

I imagine that progressing through the game and unlocking an ever greater variety of ships and weapons would add a significant degree of depth and complexity to the system, as well.

This is a recurring theme in Vendetta: The basics are very simple and easy to grasp, but it’s clear there’s a vast well of complexity waiting to be explored once you get past the fundamentals. This stands in stark contrast to EVE, which also offers incredible complexity but tends to throw you into the deep end and hope you learn to swim. 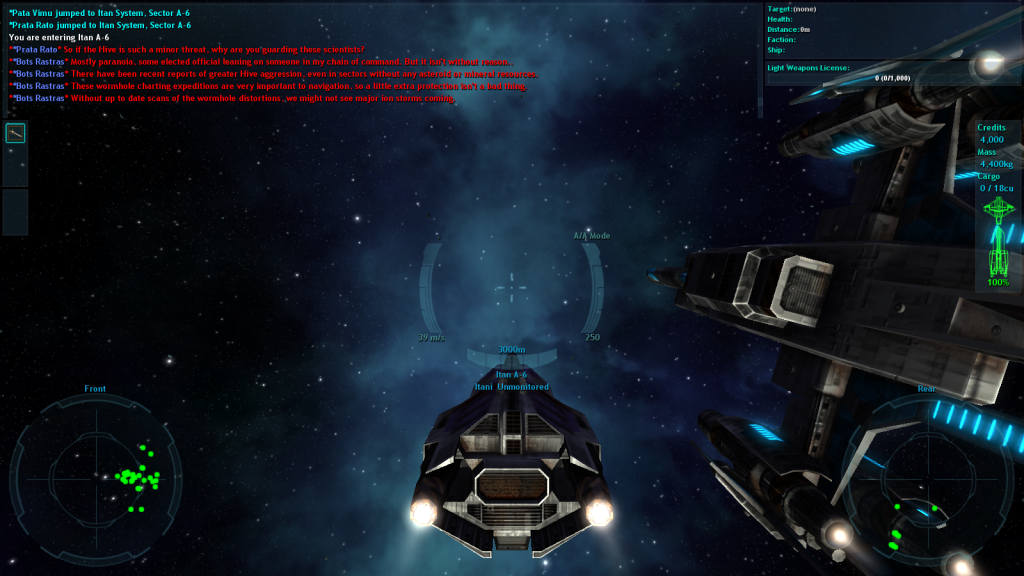 One minor complaint I have about the combat is that the game plays a sound whenever one of your shots successfully connects with the enemy. This is a good idea in theory, but the particular sound they use is a rather harsh and obnoxious beep, and it can be rather grating.

From what I saw during my trial period, Vendetta appears to offer a fairly similar selection of potential activities as EVE Online.

PvP is clearly a major focus in the game. Vendetta players must ally themselves with one of three factions. The enlightened Itani Nation are at war with the militaristic Serco Dominion, and players of both sides can clash over various objectives in deep space.

The third faction is the Union of Independent Territories, or UIT, which is neutral in the conflict. Players of this faction can potentially play both sides of the Itani/Serco conflict, which is a pretty interesting twist on the traditional model of MMO factions.

There are also NPC opponents in the form of renegade machines called the Hive, though I’m not of the impression that PvE makes up a huge part of the Vendetta experience.

There are also missions of various types, including mining, trading, and research. Vendetta has separate leveling paths for each type of activity, which can affect what types of ships you have access to. 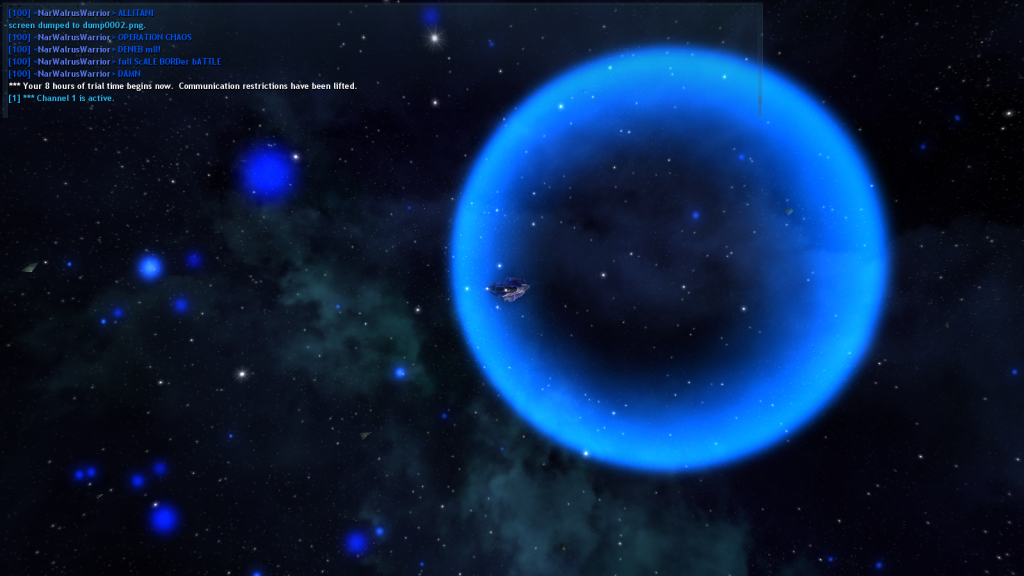 I also noticed what appears to be a fairly extensive reputation system, allowing players to make friends (or enemies) of a variety of NPC factions throughout the galaxy.

On the whole, Vendetta Online comes across as a very deep and full-featured sandbox experience, almost overwhelmingly so.

Of course, I doubt it can quite equal the vast and near baffling complexity of EVE Online, nor the scale and viciousness of its politics, but what game can? For some, being a little less complex than EVE can even be seen as a virtue — it’s brutally steep learning curve is legendary. Vendetta clearly has an intense learning curve as well, but it’s at least a slope rather than a cliff. You can, to some extent, ease into the experience.

On the other hand, Vendetta definitely lags behind EVE when it comes to production values. EVE is a beautiful and graphically advanced game, whereas Vendetta’s relatively low budget shows in its visuals.

That’s not to say Vendetta is an ugly game by any stretch of the imagination. Its star fields and planetary vistas are quite nice to look at, and overall the game’s visuals are at least decent on average. But it’s not going to compete with EVE, or any newly released MMO, in that regard.

One other area where Vendetta exceeds EVE Online — and basically every other MMO, for that matter — is the sheer number of different ways to play it offers. Its developers have made it a goal to make Vendetta playable on as many platforms as possible. 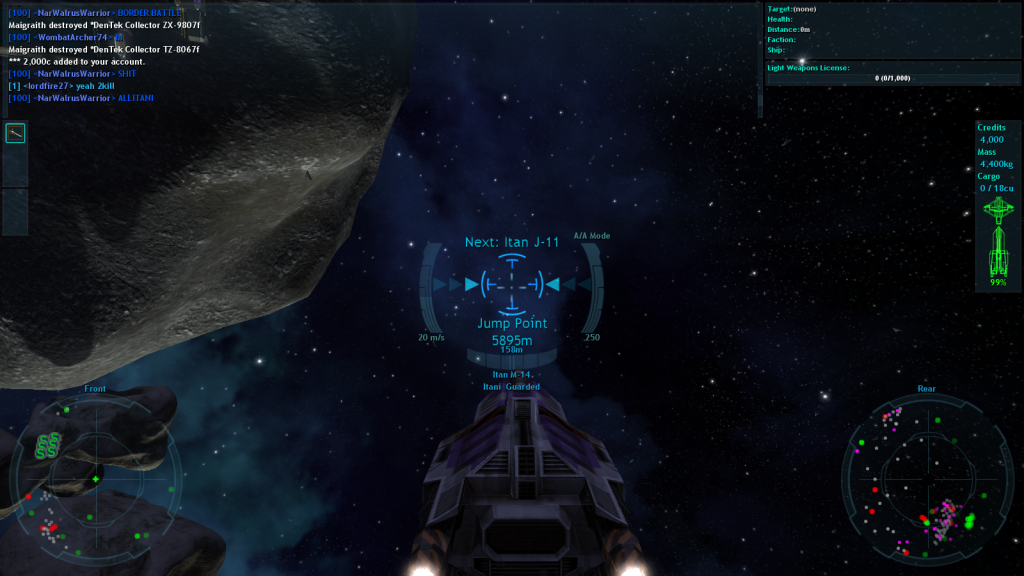 So Vendetta is playable on the PC, of course, but also Macs and Linux machines; on Android, Windows, and iOS mobile devices (including smartphones); in virtual reality on the Oculus Rift; and even on the Ouya.

And all players play and interact within the same game universe, regardless of platform.

Vendetta may not have quite the same level of scale or depth as EVE, but it’s a pretty rich sandbox in its own right, and it’s accomplished some impressive things for a relatively obscure title.

A common refrain from many people is that they’d play EVE Online if it provided a more intuitive or realistic flight model, and for those individuals, Vendetta seems an obvious choice.