When I played Ultima Online for the first time, figments of my imagination began bleeding into a reality. A game now existed in which I could truly live an alternate life. In many ways, it transcended the simple game tag and provided my first virtual world experience. I expected many immersive, virtual worlds to follow. After all, MMORPGs were only entering their infancy in the late 90s when Ultima Online launched. 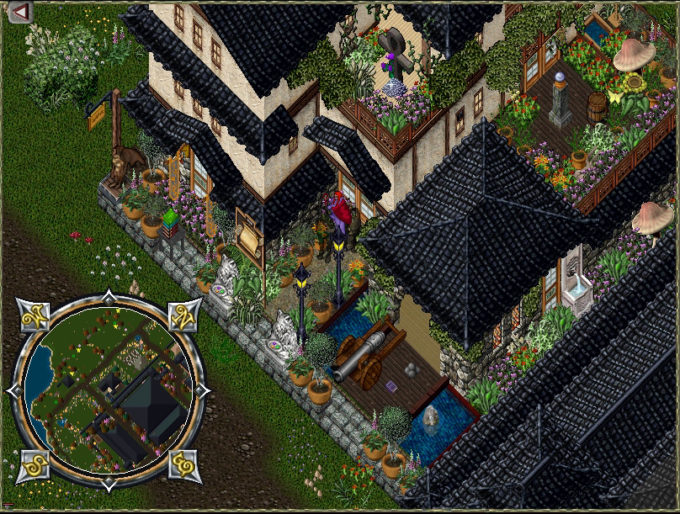 Wait? You mean I used to be able to see the OUTSIDE of player houses too?

For a time, I felt this virtual vision was coming to fruition. Several titles around the turn of the century created something more than a game. They created vivid, breathing virtual worlds. Nowadays MMORPGs feel a little too much like games. It’s a little disappointing because the genre is a fantastic springboard for creating believable worlds filled with player controlled alternate identities. Maybe this is a case of rose tinted bias, but I think it has more to do with the modernization of MMORPGs, the rise of casual gaming, and minimal creativity in adapting to those changes.

The biggest downside of true virtual worlds is that they require a lot of time to really appreciate. My free time allotment when in school allowed me to really dive into the alternate realities developers had crafted. Spending some extra time trying to decipher where to go for a quest in EverQuest didn’t feel frustrating. It just pulled me deeper into the world.

In today’s gaming climate, a quest-driven MMORPG would find itself with a pretty limited audience without obvious World of Warcraft style quest markers. That’s largely because somebody with a limited schedule wants to feel like they can accomplish something in thirty minutes. And somebodies with thirty minutes to spare are in the majority. This creates situations where developers create short feedback loops to fuel the MMORPG achievement addiction. And that has some long term implications that run counter to crafting virtual worlds.

Notice in the above paragraph the use of the word character instead of player? In general, I think developers (and publishers, probably more importantly) focus too much on what’s worked in the past. Character progression is typically a 1 to 1 ratio of character to player effort. If a character cannot progress without the player, then MMORPGs are pigeonholed into casual advancement. This is why I love MMORPGs like Eve Online, Black Desert Online, and Crowfall building AFK progression systems. It frees the player from working for all of their success and places much of that burden of the character.

Additionally, hard work is not inherently boring. If I want this blog to do well, I need to put in the effort and write a lot. My success is linked to hours spent writing, promoting, socializing, and other blog-like activities. I enjoy these things (or I wouldn’t be here). If active character progression is time consuming but enjoyable that’s OK. Unfortunately, MMORPGs tend to emphasize repetitive tasks AKA grinding. Whether it’s quest grinding or mob grinding, the negative effect on the player is the same. This is why I love dynamic events in games like Guild Wars 2 and hope to see the concept continue to evolve.

Spreadsheet simulator isn’t so bad when it lets my character, not me, do the heavy lifting.

Great, unique concepts like AFK progression and dynamic events push us closer to believable virtual worlds. They advance characters through the character handling the boring heavy lifted instead of the player. Equally important to character progression is the world’s evolution. Enticing players with the promise of a persistent world, MMORPGs subversively promise a world that behaves differently due to the player’s participation. This is largely not the case.

A persistent world technically means little more than a near 24/7 online, virtual game world for the player to access. MMORPGs do in fact provide that service, but persistent worlds seem to take themselves a little too literally. In the vast majority of the genre’s games, the worlds do not change. Players defeat the same quests, mobs reset, everything important gets instanced. A player’s character has nearly no impact on the persistently static worlds of most MMORPGs.

A true virtual world should change based on character actions. My immersion breaks pretty easily when GIANT DRAGON X gets defeated for the thousandth time on my server. Infinite resources, best in slot legendaries, static economies, and instanced content sever any remaining semblance of immersion.  This doesn’t make modern MMORPGs bad games. It makes them bad virtual worlds.

Ultimately, immersion is why creating a true virtual world is important. Virtual worlds immerse players into inhabiting an alternate persona. This is a platform created that can continuously evolve as the player plays their character. The opportunity to interact with real people who can do real things should enhance that experience. Yet, the systems available feel anything but immersive. I enjoy progression and socializing in MMORPGs, but right now I play single player when I want immersion. That shouldn’t be the case.

I’m not saying immersion is a prerequisite for a good MMORPG. They are games, first and foremost. The genre is vast and there are many ways to entertain. I’m just saying MMORPGs are dropping the ball in an area where they had a distinct advantage fifteen years ago. Bring back actual virtual worlds, and they’ll reclaim that “believable alternate reality” throne pretty quickly.