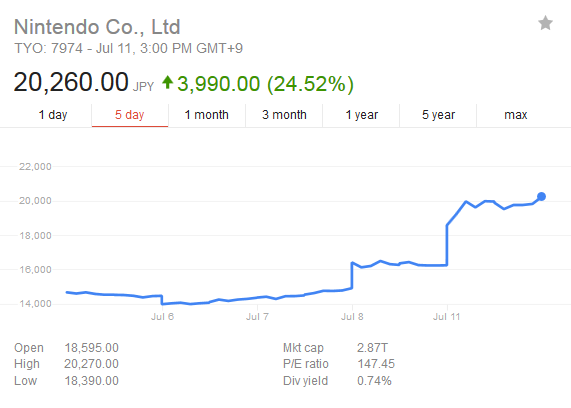 Nintendo stock up 45% since the July 6 NA/AU release date of Pokemon Go.

The augmented reality (AR) game is certainly making news, both good and bad. It’s encouraging people to walk, which fantastically combats increasing worldwide obesity rates. However, not all is well as criminals used the game to locate groups of players to rob late at night. It’s also steering focus away from the real reality, making a Pokemon Go related car wreck seem inevitable. Nonetheless, Pokemon Go is clearly the latest hit in the gaming universe. It’s funny too because it is full of things we as MMO players and gamers in general say we hate.

The core gameplay of Pokemon Go revolves around walking to Pokestops to gather pokeballs to catch Pokemon that wildly appear while walking around. When the wild Pokemon appear, the player flings the pokeballs in order to catch their prey. To level up these Pokemon, players must catch more of the same ones to acquire the necessary materials. There’s no real critical thinking involved, either in the capture or evolution mechanics. Thus to become a legendary Pokemon master you will simply embark on an epic adventure of repeating the same activities over and over to raise the seemingly unending combat power (CP) value. Meanwhile in other games, people bemoan comparable methods of grinding to progress.

It’s incredibly frustrating for a game to hoist activities on you while leaving critical components of those activities unexplained. Pokemon Go isn’t very complicated, but it’s also not very intuitive. Trial and error and logical deduction will eventually teach everything, but the game explicitly explains very little. The game shouldn’t really necessitate guides, and yet lengthy articles such as this one on tracking Pokemon are continually cropping up. Core systems such as the aforementioned Pokemon tracking, combat, and gym PokeCoin generation are left to the user to simply figure out. Players can get by without these subtle nuances, but they’ll be at a disadvantage without that knowledge.

MMOs requiring hardcore time commitments are falling by the wayside. Pokemon Go, however, can only be fully experienced by those who put in serious effort. The endgame of Pokemon Go takes place in the gyms around town. Players align themselves to one of the game’s three different teams to conquer and defend local gyms from teams of opposing colors. To conquer these gyms, players must use Pokemon with high CP in order to compete with other trainers. Holding onto these gyms at certain points of the day will reward gym guardians with PokeCoins, the game’s premium currency.

Pokemon Go Gyms, the only place where combat takes place.

Players can also store Pokemon at friendly gyms but only if space is available. Players can make space by training at the gym but will ultimately require high CP Pokemon in order to do so. To realistically acquire PokeCoins without paying, a player is going to need some strong Pokemon. As already discussed, that’s only possible through grinding. This creates a cycle where the rich get richer. Even ignoring the items that only PokeCoins can buy, not being able to participate in realistically winnable battles can be frustrating for those without a hardcore level of commitment to Pokemon Go.

To be fair, I’m personally not labeling Pokemon Go as a pay to win game. Players cannot purchase untenable power. The size of one’s wallet does not impact the need to go out and grind Pokemon captures. Reaching Pokemon master status will always require a certain level of “work”.

That said, the PokeCoin store’s inventory is full of time saving advantages such as EXP boosters, egg incubators, and Pokemon lures. Assuming equal time commitments, a paid player will quickly outclass a free player. The balancing mechanisms here are teamwork and the maximum levels and CPs of trainers and Pokemon, respectively. Eventually a free player can catch up to a paid player, but early gym dominance simply adds to that difficulty. Many players deride “time = money” cash shop purchases as pay to win so it’s worth pointing out.

Pokemon Go is surely not a friend of environmentalists. The game drains battery at lightning speed. Minimizing is not an option, lest Pokemon go uncaptured without optional push notifications. I’ll give the bugs and server issues a pass because it’s nothing new to online game world launches. The design decisions and lack of optimization options need to be brought up though because it impacts the long term enjoyment. A game isn’t very fun when it won’t work because it killed the power source (i.e. your phone). It’s similar to major PC releases that cause slowdowns and video lag due to poorly optimized code.

Let me sum this up in way MMO veterans can understand. Imagine if you took everything that made World of Warcraft a worldwide sensation and did the exact opposite. Pokemon Go would be the result.

Flip World of Warcraft upside down, get Pokemon Go?

That said, the game is clearly addictive. I still have it installed and open it up during my regular walks. It’s probably the most social game I’ve played in a while. It’s pretty obvious who is clearly capturing Pokemon alongside me, so it’s easy to strike up a conversation. (I’m eagerly awaiting the first marriage proposal to arise from this game.)

The simplistic capturing mechanic, achievement addiction, exercise encouragement, nostalgia, teamwork, and augmented reality all make for a wholly unique experience. It’s quite simply why we can love a game when we hate so much about it. I’d argue the game element isn’t even that good, but we’re willing to overlook a lot of faults when the full package delivers this much fun.